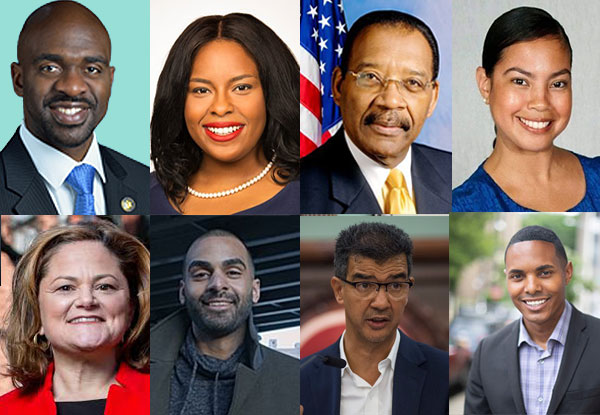 With longtime Representative José E. Serrano retiring from Congress after 30 years due to health reasons, his seat in New York's 15th Congressional District is effectively open and a crowded field has formed in the Democratic primary, set to be decided in June. Given it is one of the most Democratic districts in the country, the winner of the primary is all but certain to be the next member of the House of Representatives from the Bronx district home to some of the highest poverty rates in the country.

With the vote just around the corner -- primary day is June 23, with early voting from June 13 through June 21 and all voters eligible for absentee balloting given the coronavirus outbreak -- 8 of the Democratic candidates will debate on Thursday, May 14, from 6-8 p.m.

The debate, hosted by Gotham Gazette, City Limits, The Point CDC, and other partners, will be streamed via Zoom (at this link) and Facebook (at this link).

The debate will also be translated in Spanish at 1-800-719-6100 followed by the access code of 1157388. Those interested in Spanish translation can watch the debate by Zoom or Facebook while listening via the aforementioned phone line.

Ruben Diaz, Sr., also a candidate for the office, has not agreed to participate in the debate. (There will be other candidates on the ballot, but they have not mounted serious campaigns as indicated by a total lack of fundraising: Mark Escoffery-Bey, Julio Pabon, Marlene Tapper.)

Gotham Gazette editor Ben Max will moderate the debate, and panelists will include Sierra Straker of The Point CDC's youth advisory group; reporters Daniel Parra of City Limits and Parker Quinlan of the Hunts Point Express and Mott Haven Herald.