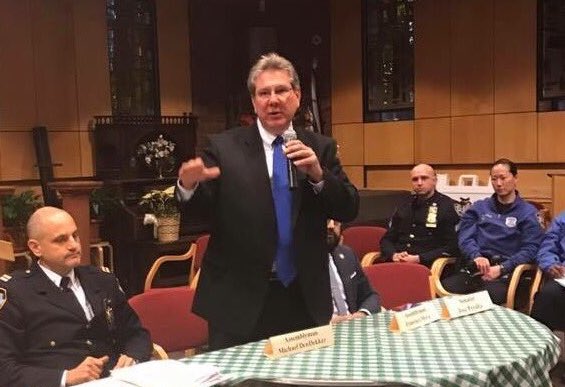 A Queens State Assembly member faces stiff competition this primary election cycle, and for the first time in his 12-year legislative career.

Assemblymember Michael DenDekker, who represents parts of Jackson Heights, East Elmhurst and Woodside in Assembly District 34, is aiming to survive four Democratic challengers for his seat in this month’s party primary election. The race follows a larger trend that accelerated in 2018, with one or more challengers running from the left, and often promising to bring more diversity to government, against a more moderate Democratic incumbent.

DenDekker’s challengers include former Manhattan prosecutor and local civic leader Nuala O’Doherty-Naranjo; former National Latina Institute for Reproductive Health Executive Director Jessica González-Rojas; Uber driver and organizer Joy Chowdhury; and Angel Cruz. Out of the four, Cruz is the only candidate who has not raised any money or spent any money in the campaign, according to New York State Board of Elections data.

While primary day is June 23, early voting will take place June 13-21, and because of the coronavirus pandemic, the governor has ordered all voters eligible to vote by absentee ballot.

The district is one of the most diverse areas in the country, and some of the most important national issues of this election year — the pandemic, police accountability, immigration, access to health care and social services — impact residents in very personal ways.

Over half of the district’s 114,500 residents are Hispanic, and over a quarter are Asian, according to the most recent American Community Survey data. Meanwhile, over 60 percent of the district’s residents were born outside of the United States, and its neighborhoods have large immigrant communities from countries in South America and South Asia.

COVID-19 hit the neighborhoods in District 34 especially hard. Central Queens, dubbed “the epicenter of the epicenter,” has become synonymous with the toll the virus has wrought on New York City, where well over 21,000 people have died of the virus. During the height of the pandemic, one-third all of COVID-19 patients were from Queens.

The pandemic completely changed the dynamic of this year’s elections, as candidates put campaigning on pause to funnel their efforts into supporting the community in more immediate, tangible ways.

Soon after the virus took hold in New York, González-Rojas morphed her campaign to assist residents during the pandemic, delivering groceries, medicine, and supplies to those in need.

“We’ve shifted to doing a community aid effort,” she said in an interview.

González-Rojas, backed by the Working Families Party, is the progressive choice to beat DenDekker, with a platform addressing housing, LGBTQ rights, police accountability, and immigrant and environmental justice. Some of her proposals include free tuition for students at the City University of New York, universal health care, defending state bail reforms that were recently partially rolled back, stronger protections for renters, and limiting Immigration and Customs Enforcement’s power in New York.

“I’m the only candidate with a specific progressive record,” González-Rojas said, noting that she was progressive “before progressive was cool.”

González-Rojas was also endorsed by former Queens District Attorney candidate Tiffany Cabán, who brought progressive policies to the forefront of her race last year. González-Rojas, O’Doherty-Naranjo, and Chowdhury all volunteered with Cabán during her campaign.

She is of Paraguayan and Puerto Rican descent, and underscored the need for a person of color to represent a district that is home to a majority of people of color. “Folks have never seen anyone that looks like them in this race before,” she said.

González-Rojas raised around $125,500 in contributions during this election cycle, and had around $27,000 on hand as of May 22, according to BOE records.

To fight the coronavirus, O’Doherty-Naranjo started a mutual aid network in Jackson Heights, called the COVID Care Neighborhood Network. Separate from the campaign, COVID Care has around-the-clock volunteers who help connect residents to services and assistance during the pandemic. O’Doherty-Naranjo said she has raised $40,000 to go toward COVID Care rather than toward her election, and that she knows she’s running an unconventional campaign.

“Who knew most of my time campaigning would be finding sources of tomatoes and toothpaste and toilet paper,” she said in an interview.

O’Doherty-Naranjo was the first person in her family born in the United States, according to her website. She was active in the district prior to COVID-19, serving as president of local civic organization, the Jackson Heights Beautification Group. Her platform focuses on funding schools, universal health care, safer streets, and better public transportation. This includes reducing class sizes, improving bus service, and heightening traffic safety through better lighting, shorter crossings, and more low speed zones and raised pedestrian crossings.

O’Doherty-Naranjo raised around $39,000 in contributions over the course of the election, and had over $32,000 on hand as of May 22, according to BOE records.

Chowdhury said that he stopped his campaign for a couple of months during the pandemic to help establish the Queens Mutual Aid Network and deliver food to residents in need. An Uber driver, Chowdhury advocates for gig economy workers’ rights, as well as immigrant rights, affordable housing, universal health care, and free tuition to public colleges.

If elected, Chowdhury would be one of only a few South Asian legislators in the state. People of South Asian descent are severely underrepresented in city and state politics, with no South Asians from New York City currently serving in the state Legislature. The first Indian-American to serve in the State Senate, Kevin Thomas, was only elected in 2018.

“We don’t have a single South Asian elected,” Chowdhury’s Communications Director Raihan Faroqui said in an interview. “It’s about time. If not there [in this district], then where?”

DenDekker, who was first elected to the Assembly in 2008, said that his campaign has largely been on pause since March because of the coronavirus pandemic. Instead he has shifted to providing “much-needed” food and supplies to his constituents, he said.

“The need has been overwhelming,” he said in an email interview.

If re-elected, DenDekker said that he is most focused on the major financial impact coronavirus will have on the state budget.

“New revenue must be sought: taxing wealthy and ultra-wealthy New Yorkers, the pied-à-terre tax, marijuana legalization, expanding casino gambling to New York City, online sports betting, and a stock transfer tax should all be implemented,” he said, as the state faces billions in lost tax revenue due to the economic shutdown ordered to support public health efforts.

DenDekker is endorsed by the powerful unions the United Federation of Teachers and 32BJ SEIU, as well as the New York League of Conservation Voters and the Stonewall Democrats of New York City.

This past week, DenDekker drew fire from influential immigrants’ rights group Make the Road New York for taking campaign contributions from law enforcement PACs, as well as not taking decisive enough action to address police accountability. The criticism comes during a nationwide movement to demand an end to police brutality, sparked by the death of George Floyd, a black Minnesota man, at the hands of Minneapolis police officers.

Hundreds marched to DenDekker’s office on June 3 to demand the Assembly member take more action against police brutality. Make the Road Action, the political action arm of Make the Road, endorsed González-Rojas in the primary race.

The same day as the march, DenDekker pledged to give $13,000 of campaign contributions he received from police organizations to local community groups.

Additionally, he has signed on to be a co-sponsor on the bill to repeal 50-a, a state civil rights law that allows records of police misconduct to be hidden from the public and appears to be on the chopping block this week in Albany.

“Police brutality must be prosecuted,” DenDekker told Gotham Gazette. “We have to completely change the directives and policies from the top down. We need police agencies to require that officers report their fellow officers if those individuals are corrupt, racist, disrespectful, or brutalizing the individuals there are sworn to protect. We need an independent commission or board to review all claims of police officers abusing their positions.”