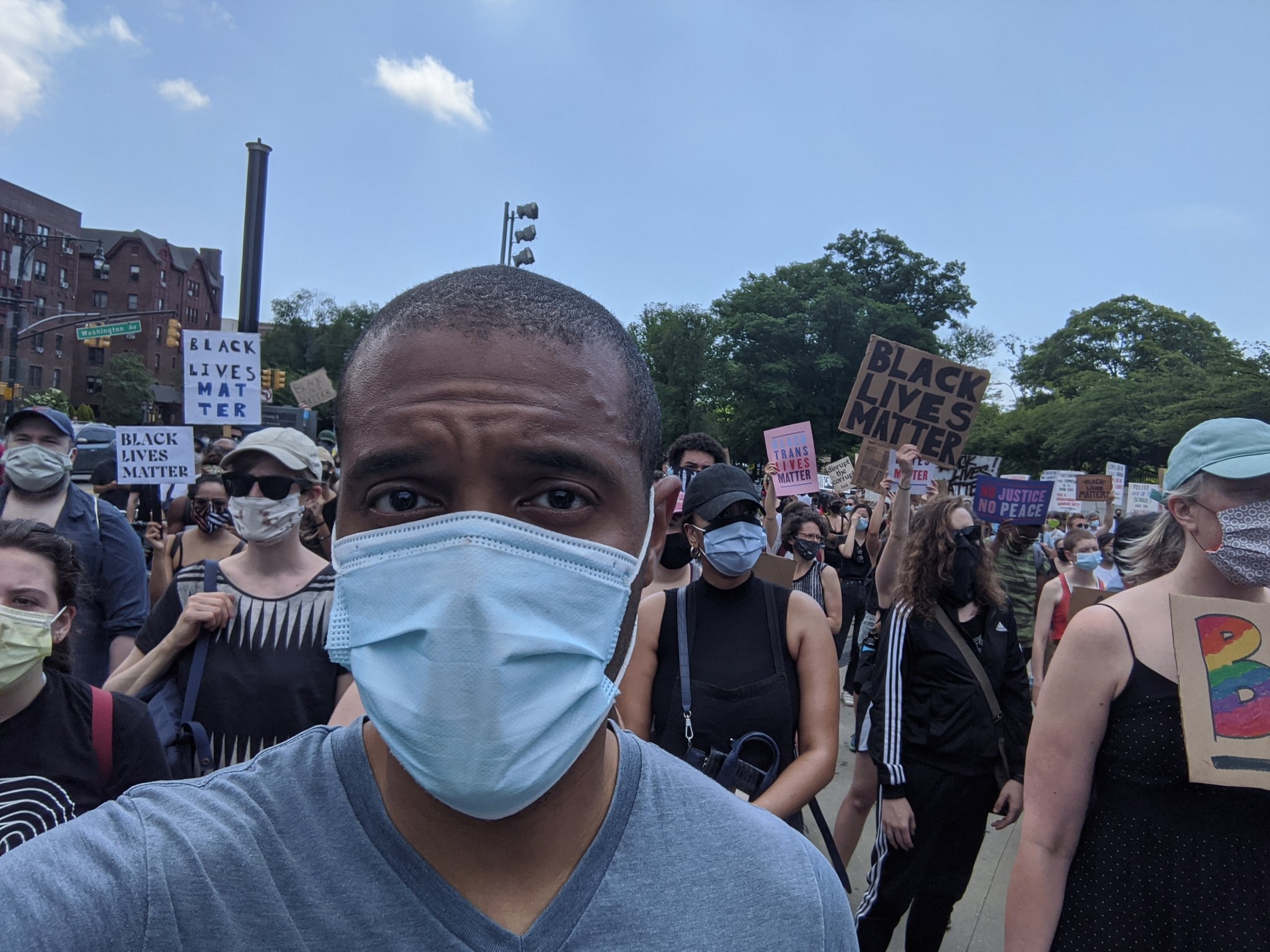 This year’s Democratic primary for Brooklyn’s 25th State Senate District mostly flew under the radar, but was one of the most interesting races in the city, with an energetic activist and teacher, Jabari Brisport, backed by the Working Families and Democratic Socialist of America-New York City, taking on Assemblymember Tremaine Wright, whose district overlaps with part of the Senate district and who had the backing of the retiring senator, Velmanette Montgomery, among many others in the political establishment. Also in the race was Jason Salmon, a progressive with some support trying to make headway against two better-known candidates.

As the COVID-19 pandemic rocked the city and drastically altered campaigning, as well as the elections themselves through the expansion of absentee voting and more, June arrived, and with it the early in-person voting and absentee voting periods, then primary day, June 23.

When the in-person votes were tallied, Brisport appeared on the verge of a major upset, potentially outpacing a sitting Assembly member who had a great deal of local establishment support. While he leads the vote going into the counting of absentee ballots by a 17,113 (52.25%) to 13,301 (40.61%) margin of 3,812 votes, there are still more than 26,000 absentee ballots to be evaluated and counted by the Board of Elections.

In an interview with Gotham Gazette, Brisport said that his campaign is “fairly confident” that he will emerge victorious once the election results are finalized.

Brisport, who unsuccessfully ran as the Green Party nominee in 2017 against City Council Member Laurie Cumbo and clashed with Cumbo during this year’s campaign, is optimistic that he will get to take just one of 63 Senate seats across the state, and join forces with neighboring Senator Julia Salazar, also a democratic socialist, who was elected in northern Brooklyn after beating an incumbent in the 2018 Democratic primary and endorsed Brisport this year. Brisport ran on a far-left platform including the New York Health Act for single-payer health care, a Green New Deal for New York State, and the decriminalization of fare evasion, sex work, and simple drug possession. Housing issues are also at the top of his list, he said.

As with almost every seat in New York City, in the 25th State Senate District winning the Democratic Party is nearly a guarantee of winning the general election, if there is one. The 25th District includes neighborhoods such as Bedford-Stuyvesant, Prospect Heights, Fort Green, Boerum Hill, Gowanus, Park Slope, and Red Hook.

It draws most of its constituents from parts of the 56th and 57th Assembly Districts. Brisport won the 57th handily, earning 59% of the in-person votes there, while Wright won her home 56th District with 53% there.

Brisport attributes his solid showing in Wright’s home district to “a very present campaign” that “brought new people into the political process.” He told Gotham Gazette that left-wing candidates “win by speaking to people,” “not by relying on old political machines that slap a few endorsements together and put out a mailer and call it a day without engaging with constituents.”

Brisport called his dual endorsers of the Working Families Party and Democratic Socialist of America-New York City “a very dynamic duo” and hopes that the two groups continue working together. He was also endorsed by Salazar and Rep. Alexandria Ocasio-Cortez, two officials who won upset primaries in 2018 on similar platforms to Brisport's. He was one of a handful of candidates backed by both the WFP and DSA this primary season, and said he’s “excited” about the prospect of the membership of the two working together to achieve shared policy goals in Albany.

“One of my top priorities is passing ‘good cause eviction,’” Brisport said when asked about pressing issues before the State Legislature. He said there has been “a mass-bleeding of people and predominantly people of color” from areas like his district and “stemming that bleeding” will be among his top priorities as a legislator. The bill, which has been championed by Salazar, would ensure that landlords can only evict tenants for “good cause,” not at their whim.

Since primary day, Brisport has been participating in the “Occupy City Hall” protests demanding defunding of the New York City police department. While the most common call was for reducing the NYPD’s nearly $6 billion annual operating budget by $1 billion, Brisport has called for $3 billion in cuts.

“I believe the police are a fundamentally violent institution,” Brisport said, recounting his own negative interactions with officers, including one in which he had a gun drawn on him in a case of mistaken identity. Brisport believes that “stability is the answer to public safety,” and said “there shouldn’t be cuts to health care or education while the NYPD budget is at $6 billion.”

As a state senator, Brisport would pursue legislation that would “reduce the number of interactions” between New Yorkers and the police, mostly through decriminalization of nonviolent crimes, such as sex work and simple drug possession, which would “reduce the need for cops.” He has also proposed, along with the other DSA candidates running in this year’s primaries, a sentencing reform commission to bring the state incarceration rate to pre-War on Drugs levels.

In the lead-up to a city budget deal announced June 30, Brisport led protesters from the city DSA branch on a march and rally targeting Cumbo, who is the City Council majority leader, outside what they believed to be her Brooklyn home, leading to a heated war of words between the two over the course of weeks. Cumbo, who defeated Brisport by a fairly wide margin in the 2017 race (though he did better than most general election challengers to sitting Democrats), endorsed Wright in this year’s Senate primary. She organized a counter-demonstration at Brisport’s home last Monday, right before the primary.

Cumbo harshly criticized Brisport and accused him of breaking a code among Black people. Cumbo strongly condemned the tactics of Brisport and the DSA, labeling it as “an assault on my safety and that of my child” and a “lynch mob.” At the counter-demonstration, she addressed Brisport in his absence, saying “you have been used, my brother,” and portrayed him as the Black spokesperson for what she described as a mostly white group of DSA activists.

If the Senate results hold through absentee ballots, the two are likely to share a considerable number of constituents for at least a year (Cumbo is term-limited out of the Council at the end of 2021).

Brisport said Cumbo’s telling “was an unfortunate description of the event” and characterized the protest as “a very polite and peaceful demonstration.” He noted that he started the demonstration by thanking Cumbo for supporting defunding of the NYPD by $1 billion. He called the counter-demonstration “a tactic to get Tremaine [Wright] elected and the timing was pretty transparent.”

However, Brisport insisted that “really I just want to focus on defunding the NYPD” and that he doesn’t hold any grudge against Cumbo. “I really don’t worry because I don’t personally have any bad blood with the Majority Leader,” he said, adding he would “love to collaborate with her” in the future.

A gay Black man, Brisport is part of what he described as “a wonderful rainbow wave,” in which Ritchie Torres and Mondaire Jones also likely won their respective congressional primaries in the Bronx and Westchester. Torres and Jones appear likely to be the first openly gay Black men in Congress (Torres identifies as Afro-Latino). Similarly, Brisport will be the first openly gay Black state legislator in New York history.

“So many of these things are interconnected,” Brisport said when asked about the significance of these historic firsts. He pointed to how “queer people of color were severely impacted by Covid” and, as such, politicians like him “understand that intersectionality and can advocate on behalf of marginalized people.”

Brisport’s victory, along with Salazar’s reelection and Zohran Mamdani’s possible victory in Queens over Assemblymember Aravella Simotas, are significant boosts to the DSA, as are showings in other races where the DSA endorsed a candidate, but the outcomes are harder to predict: Marcela Mitaynes is a mere 419 votes behind Assemblymember Félix Ortiz in Brooklyn's 51st Assembly District and Phara Souffrant Forrest trails Brooklyn Assemblymember Walter Mosley by less than 600 votes in the 57th District.

Meanwhile the Working Families Party, Sunrise Movement, and other groups among the ascendent left wing of the Democratic Party also saw a number of their backed candidates do quite well in the primaries, with some races overlapping and others also still to be decided via absentee ballots.

Chi Anunwa, co-chair of the NYC-DSA’s steering committee, told Gotham Gazette that “Jabari’s likely victory represents a big step forward for housing and racial justice politics in New York. With Jabari’s election, New York State will now have two socialists in the State Senate who are champions of the tenants’ rights movement and the movement for more radical police reform. As a longtime racial justice organizer, Jabari is committed to upending the symbiotic relationship between the police and the real estate industry in New York State, and by extension, the political status quo where protecting private property is more important than protecting New Yorkers from the violence of evictions and police brutality.”

When reached to discuss the race, Assemblymember Wright declined to comment, but this week her campaign sent out an email to supporters telling them “the election isn’t over yet” and asking for volunteers to help with the absentee ballot count.

Salmon, who attained about 7% of the in-person vote, conceded the race to Brisport on June 30, saying in a statement “I would also like to congratulate and commend Jabari Brisport who has been a powerful voice for the progressive movement” and endorsing him.