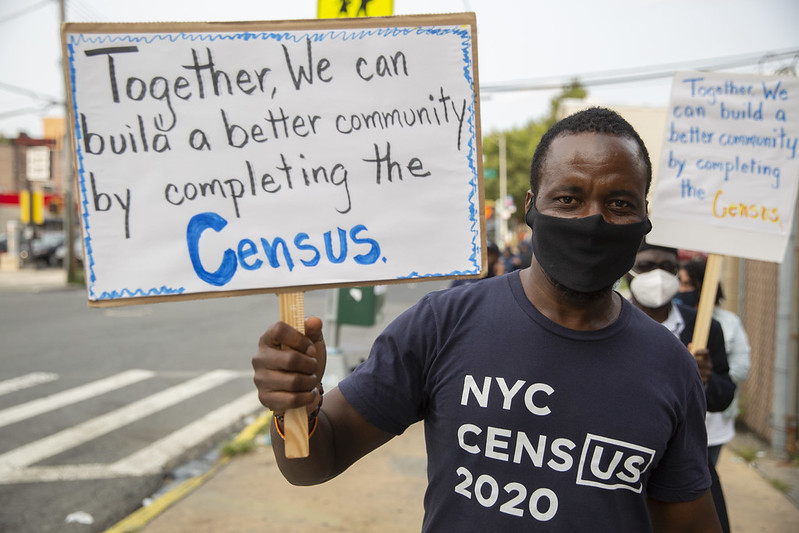 On Tuesday, the Supreme Court allowed the Trump administration to shut down counting of the 2020 Census ahead of the previously-scheduled October 31 conclusion. After several shifts in the deadline, it now appears final that New Yorkers have until Friday morning at 6 a.m. to complete the questionnaire that is required by the U.S. Constitution for counting all residents of the United States every ten years.

As of Wednesday, officials reported the Census completion rate in New York City at 61.4% of households.

The move to shorten the count is likely to significantly impact the counting of communities of color, including undocumented immigrants, and other hard-to-count populations, and will likely have a negative impact on New York’s share of federal funding for the coming decade and, possibly, the number of seats in the House of Representatives allotted to the state.

Due to the COVID-19 pandemic, many door-to-door census outreach operations in New York City were discontinued, primarily from March to May. This, non-governmental organizations and the New York City Census 2020 team said at a Wednesday City Council hearing, may have significantly impeded the process of counting communities of color, including undocumented immigrants, who President Trump has sought to either dissuade from participating or simply not count. Wednesday’s Council hearing on the 2020 Census by tits Committee on Governmental Operations was scheduled before the Supreme Court’s decision, but was part of new last-minute urgency about the final hours of the count.

The de Blasio administration has put together a massive census operation that has helped boost the city’s self-response rate from 2010 levels and close the important city-national gap despite New York being the city worst-hit by the pandemic and a lack of investment by Governor Andrew Cuomo’s administration, which had promised robust efforts but did not follow through.

As of Wednesday, Staten Island topped the city in self-response rate at 66.1%, Manhattan at 62.5%, Queens at 62.3%, and The Bronx at 62% - all an improvement from 2010, Census officials said. Meanwhile, Brooklyn, the city’s most populous borough, had its lowest response rate at 57%.

Census efforts faced a challenge when it came to Manhattan, given officials said many had left the borough in March as the coronavirus outbreak took hold, and had not come back since or had not filled out the census. Last-minute efforts by the city census office are focused on getting more responses from Manhattan and upping the overall count.

“We had heard anecdotally that they had filled it in second locations and not in Manhattan, so we mailed them to correct their location and phone banked and texted them. Manhattan numbers moved as a result but it was and still is a very stubborn problem,” Menin said. Manhattan Borough President Gale Brewer said at the hearing that the hours till the deadline will be crucial in terms of counting and advised looking at schools, synagogues, and churches to reach out.

Corona, Queens was at the bottom of the list among New York City neighbourhoods in terms of self-response rates, according to Amit Bagga, Deputy Director of NYC Census 2020. Much of this was attributed to the pandemic, which hit the area hardest, and efforts focused on immigrant communities turned to reaching out at food and mask distribution events, and phone banking in multiple languages, including Spanish, Mandarin, Cantonese, Punjabi, Hindi, Nepali, Russian, Bangla, and Urdu. Hustle, WhatsApp, and WeChat platforms were also used to text message information about the census.

City Council Member Carlos Menchaca, co-chair of the Council’s census task force, questioned if there were any outreach efforts that didn’t particularly work, noting that ICE raids have been frequent in neighborhoods like Sunset Park, which made communicating census enrollment harder. Menin responded that the biggest problem was misinformation around the census that could have been easily dealt with if in-person canvassing was an option, but phone-banking wasn’t completely effective at dealing with.

On the question of difficult-to-reach populations, Bagga pointed to Doubled Up, a multilingual campaign by the city census office around the thousands of New Yorkers who live in largely illegal basement units, and outreach included landlords who often discourage their tenants from participating in the count. The Orthodox Jewish community, Menin noted, were the toughest to get to participate in the census, but community leaders and local media, particularly radio, were the major movers of the needle. The focus for the final hours will be on phone-banking and door-to-door canvassing.

“This could be a day of celebration of all the work we’ve done, but unfortunately we are talking about another attack by the Trump administration, and yesterday’s announcement was a loss of democracy in this country,” said Antonio Alarcon, census coordinator for Make the Road NY, an advocacy group, during an emergency press conference before the Council hearing. “Any attempt to shortchange the census count is an attempt to shortchange our communities. We are disappointed by the decision for it to be stopped two weeks earlier, and this is once again a direct attack on communities of color.”

“Losing two weeks is critical,” Menin said, adding, “it’s so much we could have done with that time we have now lost. We are going to look at every single legal option if the count is inaccurate or it emerges that New York was undercounted.”

“The money we get for hospitals, affordable housing, Medicaid, school funding, mass transit - every area of life in our city has a federal component, so when we ask for appropriations we need to have the appropriate count,” said Derek Perkinson, NYC Field director at the National Action Network. “That’s the critical threat, apart from losing congressional seats.”

Cuomo put out a press release on Wednesday afternoon urging New Yorkers to fill out the Census before the Friday morning deadline, and reminding them that it can be done online, by phone at 1-844-330-2020, or via the paper form, including with the help of a census worker.

The press release from Cuomo’s office stressed that “The Census asks how many people are living in your household as of April 1, 2020. The Census asks just 10 basic questions: name; number of people living or staying in the home on April 1, 2020; whether the residence is owned or rented; telephone number (only to be used if needed for official Census Bureau business); sex; age; date of birth; Hispanic origin; race; and relationship with other household members.”

It does not ask about citizenship status, political party, or any other characteristics beyond the above.

"The Census only happens once every 10 years and it's one of the most important ways New Yorkers can help ensure the state gets the representation and funding we need in Washington. This process profoundly affects our state's future, and I strongly urge every New Yorker to participate and do it now," Cuomo said in a statement. "As New York continues the fight for aid from the federal government to help us respond to the COVID-19 pandemic, the time is now for New Yorkers to complete the Census."