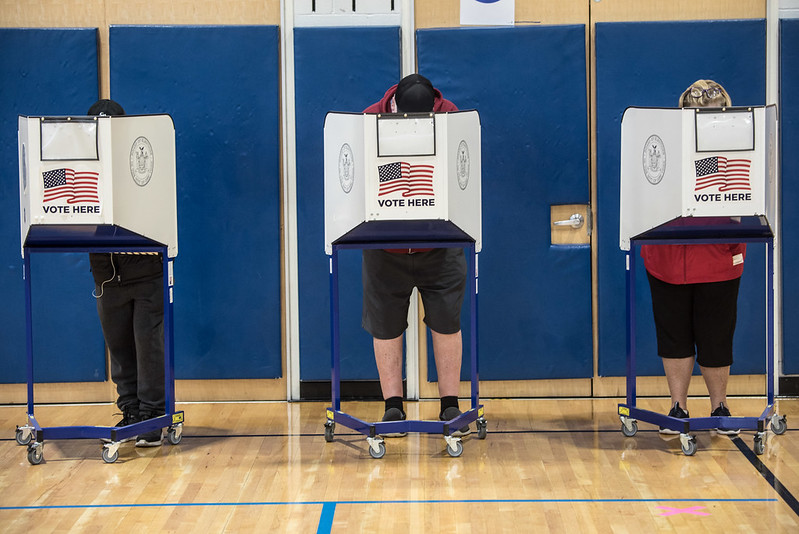 While final results and tallies are still unknown, it appears that the 2020 election has seen an increase in voter turnout in New York, as it has across the country.

As of November 1, the New York State Board of Elections reported there were 5.57 million registered voters in New York City, among 13.56 million across the state. It appears there will be more than 2.8 million votes cast in the city this general election, but the final tally will be heavily dependent upon how many absentee votes are cast and counted. Roughly 6,495,194 were cast in the presidential race across the state as of election night, according to the State Board of Elections.

In the 2016 presidential election, 2.76 million voters cast ballots in New York City -- roughly 56% of registered voters at the time -- out of a total 7.8 million votes cast statewide, a 62% turnout rate.

This year, it appears the city will likely surpass its 2016 vote total, though not necessarily its turnout rate. Vote counting is ongoing, particularly amid an unprecedented expansion of absentee voting, where eligibility was made universal due to the coronavirus.

After polls closed on Election Day, November 3, the city Board of Elections reported a total of 2,346,302 votes cast between the nine-day early voting period and Election Day in-person votes. That number includes more than 1.1 million New York City voters who cast ballots during the state’s first early voting period to occur during a general election for president.

Meanwhile, more than 1 million absentee ballots were requested in the city, and more than 550,000 had been returned by voters and received by the Board of Elections as of numbers released on Election Day, with another day for such ballots to be received in the mail. If most of those ballots are valid, the city could hit and surpass 2.8 million votes. Turnout of 2.8 million would be about 50% of the 5.57 million registered voters in the city (about 600,000 of whom have been deemed inactive due to a lack of recent participation in elections).

In-person voting totals across New York State hit 6,495,194 on election night, per the State Board of Elections, with hundreds of thousands of absentee ballots still to be counted. Joe Biden and Kamala Harris received 55.16% of the vote, with President Donald Trump and Vice President Mike Pence receiving 42.8%. In New York City, Biden and Harris received roughly 73% of the presidential/vice presidential race votes, with Donald Trump and Mike Pence getting about 26%.

More than 287,338 of the votes across the state (170,000 in New York City alone) for Biden and Harris came on the Working Families Party ballot line, which means the party hit the new state threshold and will continue to have an automatic ballot line moving forward, for at least two more years. Trump and Pence received 249,078 of their votes across the state on the Conservative Party line, helping it to also hit the threshold to keep its line. The fate of other small political parties' ballot lines looks doomed.

New York City’s general election early voting numbers dwarfed early voting turnout in the June primaries -- when only 52,000 people took advantage of the option citywide -- and the roughly 60,000 people who cast early ballots last fall, when there was little on the ballot and early voting was first offered in New York.

But not all boroughs saw the same enthusiasm for early voting this year. Brooklyn saw a relatively high early turnout rate of about 22% of registered voters, while the Bronx and Queens showed the lowest participation with roughly 18%, each (Manhattan fell in between with 19% turnout). Staten Island was an early voting outlier with 30% of its registered voters participating. The disparity may have something to do with the availability of early voting poll sites. Staten Island had the fewest number of early polling locations but the lowest ratio of sites to registered voters: about 35,000 voters per location on average. That ratio was more than doubled in Manhattan and Queens, and the Bronx and Brooklyn each had ratios above 1 site per 50,000 voters.

But Staten Island’s participation rates are often higher than other boroughs and this year’s gap may also have had to do with hosting the only competitive congressional race in the city. In New York's 11th Congressional District, spanning all of Staten Island and some of Southern Brooklyn, incumbent Rep. Max Rose, a first-term Democrat, is facing off in a bitter battle with Republican Assemblymember Nicole Malliotakis. The challenger holds a large lead as of election night and declared victory, while Rose pointed to potentially 50,000 absentee votes still to be counted and did not concede.

Roughly 192,000 voters in the district went to the polls when Rose was elected in 2018, defeating incumbent GOP Rep. Dan Donovan, while 232,000 voters cast ballots in the race that gave Donovan the seat in the last presidential election.

A similar dynamic is playing out in State Senate District 22, where first-term incumbent Democrat Andrew Gounardes is being challenged by Republican Vito Bruno. In that district, which covers parts of southern Brooklyn, Gounardes beat then-long-time incumbent Marty Golden, a Republican, in a 2018 race with 66,000 total votes -- just three-quarters of the turnout in 2016, when Golden ran unopposed.

There are many more numbers to crunch in the coming days and weeks, especially as the absentee ballots are counted.

"There are going to be people who haven't voted before," said Jerry Skurnik, a veteran political consultant who runs the Prime New York firm, in an interview with Gotham Gazette. "I think there are two reasons for it. One is the interest in elections and politics because of Trump. And the fact that it's easier to vote this year...Being able to vote absentee without having to really be out of town, or being able to early vote without having to wait online today is a lot more convenient."

According to an analysis of voter history data from Prime New York, about a quarter of the roughly 850,000 primary voters in New York City had not voted in a previous primary over the last ten years. Prime New York will eventually conduct the same analysis of the general election.