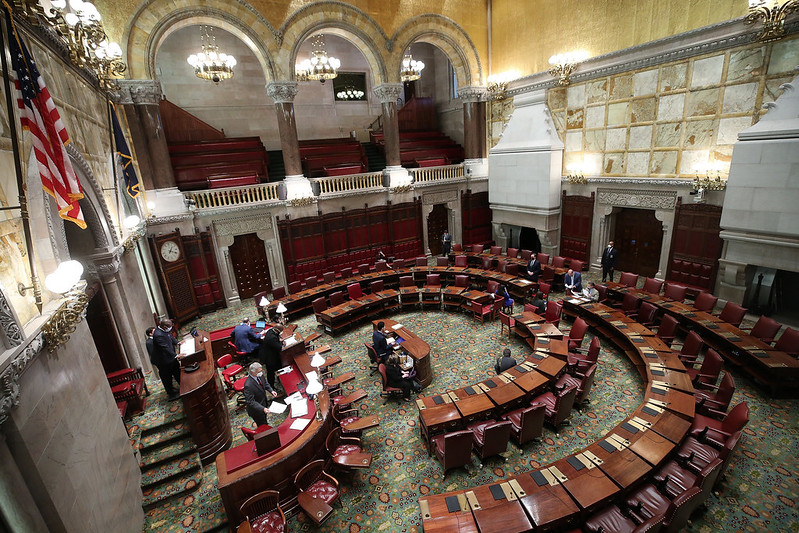 Though hundreds of thousands of votes across New York are still to be counted and many races are not yet called, it appears certain that Democrats will retain the majority in the State Senate that they won two years ago, and by a fairly wide margin. But, Republicans seem poised to regain several seats in the chamber to narrow what has been an exceptionally wide 40-23 seat margin and keep Democrats from expanding it to what they hoped would be a veto-proof supermajority.

With a comfortable hold on the State Assembly and the governor’s office, Democrats will continue to control state government for at least the next two years.

But with the 2020 election heading toward counting of absentee and other paper ballots, a number of State Senate races remain up in the air.

Unofficial election night results showed Democrats winning at least 28 State Senate seats and Republicans winning 9. With about 1.2 million absentee ballots cast statewide in the election and with counting of those ballots set to only begin next week, it’s too early to tell how the rest of the 26 races will end up.

Early indications show that Republicans seem to have a lead in several competitive districts home to first-term Democratic senators, meaning the Democratic majority could be diminished by as many as five seats. Republican Senate Minority Leader Rob Ortt said Wednesday he believes his conference will have at least 27 seats when the dust settles.

Going into the election, Democrats held 40 seats and Republicans held 20 seats in the 63-seat Senate, while three seats most recently held by Republicans were left vacant based on retirements or resignations.

Democrats were hoping to pick up ten seats, particularly “open” seats where there had been Republican retirements and the districts held a Democratic voter enrollment advantage. Democrats were also on the defensive in several seats. It remains to be seen how all those districts will shake out.

“Despite a difficult night for many Democratic candidates throughout the state and nation, the Senate Democratic Conference comfortably retained our majority and will be welcoming a historic group of new upstate Democrats to the Senate,” said Senate Majority Leader Andrea Stewart-Cousins, a Westchester Democrat who was just reelected, in a statement. “With the record high number of outstanding absentee ballots that are overwhelmingly Democratic, we will add even more victories to our majority as the vote counts continue. The Senate Democratic Majority will continue to lead New York State forward as we recover from this pandemic and economic crisis.”

In a Wednesday appearance on The Capitol Pressroom radio program, Deputy Majority leader Mike Gianaris, a Queens Democrat who also won reelection this week, expressed confidence that there are an “overwhelming” number of Democratic votes that were cast in absentee ballots. “Given our projections, we fully expected that some of these close races we were going to be behind on election night and ultimately win,” he said. “That's the posture we're in right now. We secured 36 seats comfortably so the majority is intact with a sizeable cushion. That number is going to grow because there are eight or so districts where we still believe we can overtake the Republicans.”

On the Republican side, Minority Leader Ortt, speaking to reporters on Wednesday morning, saw the early results as an indication that voters are disaffected with Democrats. “What you saw last night was a repudiation of one party rule,” he said, confident that the party will win up to 29 seats once all votes are counted.

Along with the Senate races, he also pointed to the party’s victory in some congressional seats held by Democrats. “That is a huge, huge signal, I think certainly to the leadership of the majority of the State Senate that the people of New York, of all political stripes, did not like what they saw the last two years,” Ortt said. “And they want to see something different. They want to see more balance, they want to see checks.”

In seven districts where Democrats had expressed confidence about picking up seats previously held by Republicans, the results are mixed so far. The in-person vote tallies do not account for significant numbers of absentee ballots, leaving a lot unknown for the time being. The State BOE provided a snapshot of absentee ballot numbers as of November 6, though absentee ballots were continuing to be delivered and those numbers were likely to change.

In three districts, Democrats felt they had a solid chance of flipping Republicans seats but the current vote tallies, without the absentee counts, look promising for the GOP.

In District 4, incumbent Republican Phil Boyle has a strong lead with 69,199 votes, about 55.49%, against Democratic challenger former Assemblymember Christine Pellegrino, who has received 46,464 votes, about 37.26 %. There were 19,717 absentee ballots from the district, including from 9,495 Democrats, 4,747 Republicans and 4,363 independent voters.

Republicans fielded competitive candidates in several races, particularly challenging first-time Democrats elected in 2018 in relatively moderate districts. Almost all of those challenges seem like they could yield seats.

In District 22, Republican challenger Vito Bruno is in the lead with 40,621 votes, about 51.37%, against incumbent Democratic State Senator Andrew Gounardes, who has received 34,586 votes, about 43.73%. According to the New York City Board of Elections, 39,294 voters requested absentee ballots in the district, including 24,689 Democrats and 5,587 Republicans. Of those, a total of 18,524 ballots were returned by 11,622 Democrats and 2,651 Republicans. Another 7,785 independent voters also requested absentees and 3,714 returned them to the BOE.

In District 39, Democratic State Senator James Skoufis, a first-term incumbent, is currently ahead but with a margin that appears too early to call, though the senator did declare victory. He has received 50%, or 54,976 votes, so far, compared to Republican challenger Steve Brescia’s 44.23%, or 48,639 votes. There were 5,432 absentees returned – including 3,069 from Democrats, 927 from Republicans and 1,128 from independents.

In District 40, incumbent Democratic State Senator Pete Harckham, another first-term senator, is trailing with 45.48%, or 58,233 votes, against Republican challenger Rob Astorino, who has received 51.31%, or 65,686 votes, and was previously Westchester County Executive and the 2014 GOP nominee for governor. There were 31,622 absentee ballots returned in the district, including from 17,354 Democratic voters, 5,775 Republican voters and 7,000 independent voters.

The conference is set to have one newcomer in Jabari Brisport, an activist and teacher backed by the Working Families Party and the Democratic Socialists of America, who ran uncontested in the general election for the 25th State Senate District in Brooklyn. Brisport pulled off an upset in the primary, defeating Assemblymember Tremaine Wright, who was supported by the previous officeholder, the retiring Velmanette Montgomery, and a third candidate, Jason Salmon.