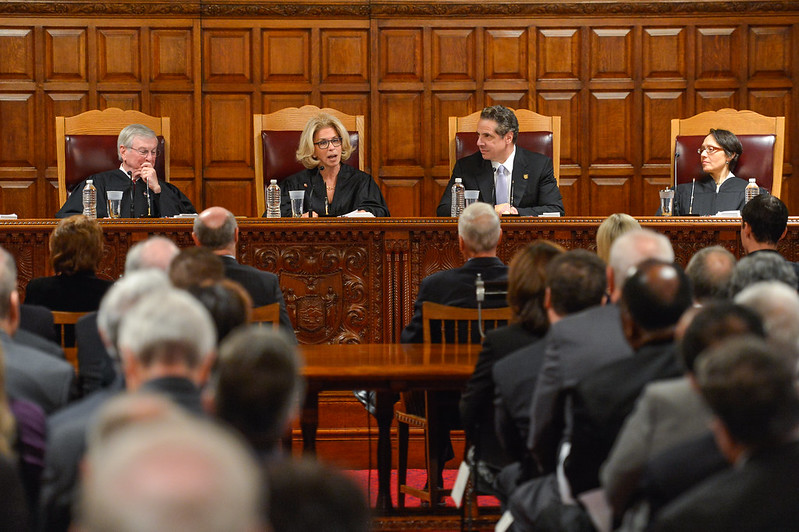 Members of the New York State Assembly’s Judiciary Committee held a virtual hearing on Thursday to examine the impacts of a proposed $300 million cut to the state judiciary’s budget. The reduction, which represents a 10% cut to the court system’s $3 billion budget for the current fiscal year, was announced by the Office of Court Administration (OAC) in September in response to Governor Andrew Cuomo’s directive that all state entities reduce their budgets by 10% to mitigate the budgetary effects of economic downturn caused by the COVID-19 pandemic. The governor has held off on finalizing more sweeping budget cuts while lobbying for a major aid package from Washington, hopes that were buoyed by Joe Biden’s victory in the presidential election.

Witnesses at the hearing, which was led by Committee Char Jeffrey Dinowitz, a Bronx Democrat, warned that the proposed budget reduction could have far-reaching effects on the state’s court system, from exacerbating case backlogs to accelerating staffing shortages. Testimony was focused in particular on the decision by the OCA‘s administrative board not to approve 46 of the 49 older judges who applied for recertification for the upcoming calendar year. Judges who wish to serve on the bench beyond the state’s mandatory retirement age of 70 must apply to the OCA for recertification every two years until they reach 76. Judges who are not granted recertification must vacate their positions by December 31, which is three-quarters of the way through the current fiscal year.

Michael Regan, Chair of the New York City Bar Association’s Council on Judicial Administration, said the impending loss of the 46 judges will further hinder the courts’ ability to process the case backlog created by the pandemic. As of August, the state courts were facing a backlog of nearly 200,000 pre-pandemic cases.

“The loss of these 46 senior and experienced judges will have an immediate and significant impact on our court system,” said Regan. “As proceedings have already been delayed by the pandemic, caseloads and backlogs are rising, there is an increasing demand for access to the courts, and there is a need for an adequate number of experienced judges to handle the growing inventory of old and new cases.”

Representatives of the OCA declined to participate in the hearing, citing ongoing litigation over its decision not to recertify judges.

On November 5, five of the judges who were denied recertification filed a lawsuit against the OCA in Suffolk County State Supreme Court, alleging that the OCA’s “arbitrary and capricious” decision violated New York’s prohibition on age-based discrimination.

Assemblymember Dinowitz and other members of the committee expressed their frustration with the OCA’s absence.

“I am disappointed that OCA has chosen not to participate this morning in the hearting,” said Dinowitz in his opening remarks before the committee. “Time is of the essence on some of the issues, certainly concerning the termination of 46 judges, and waiting several weeks might make the issue moot. And as they say, justice delayed is justice denied.”

New York is currently facing a budget deficit of roughly $14.5 billion for the current fiscal year, with the state’s budget office expecting the deficit to expand to nearly $62 billion between now and 2024. If approved by Governor Cuomo, the proposed reduction would be the largest to the judiciary’s budget since the 2011-2012 fiscal year, when the judiciary lost $170 million from its budget amid a different state budget crisis.

In a letter announcing the planned cuts, Judge Marks said that the OCA’s decision not to recertify the 46 judges would trim $55 million from the judiciary’s expenditures. The court system has also implemented a hiring freeze, eliminated all “non-personal service” spending, and deferred all substantial payments in an effort to limit spending.

Critics of the OCA’s decision charged that the board’s choice not to recertify the judges was premature, given that the proposed budget reductions have not been finalized by the governor and that the state is still waiting to learn if it will receive fiscal aid from the U.S. Congress through a proposed federal stimulus package.

Witnesses also said that the OCA’s decision came at a particularly inopportune moment, as state courts struggle to navigate the legal and logistical difficulties created by the coronavirus pandemic.

“Reducing the number of judges on the bench and their staff should be [the administration’s] last resort when considering budget cuts,” said Hon. Charles C. Merrell, the president of Association of Justices of the Supreme Court of the State of New York. “The courts are overburdened especially with imposed delays and suspensions imposed by the pandemic. When [these restrictions] are lifted, the influx of cases is expected to be staggering. This is not a good time to slash the judiciary by 10%.”

Jesus Zeno, a representative of the Puerto Rican Bar Association, said that loss of the 46 judges, 17% of whom were people of color, also risks exacerbating racial and other demographic disparities on the bench. A study released in October by the Special Advisor on Equal Justice in the New York State Courts found that 58.1% of New York City judges are white, while only 31.7% of the city’s population identifies as white.

“Collectively, the loss of these seven to eight judges of color will diminish the strides that have been made to diversify the judicial positions in the New York State court system,” Zeno said. “As a result, the ripple effects of their loss will remain with us for many years to come.”

Zeno also warned that the budget reductions could create new difficulties for litigants and defendants, including delayed court dates, longer processing periods, and diminished access to state-sponsored legal services. According to Zeno, these difficulties would disproportionately affect low-income communities and people of color who have already been hit hardest by the pandemic.

“It’s going to be devastating to the minority community and to those people who do not have the means for adequate representation,” said Zeno. “Those cases may take longer because many of the individuals who appear in family court are pro se, and many of the defendants in tenant court are pro se, so those pro se litigants who do not have the skills or the means to defend a case, they’re going to put on the back burner.”

The budget reduction would also put a burden on the court system’s approximately 15,000 non-judicial employees, including court reporters, court officers, and judicial clerks, many of whom fear layoffs, pay reductions, or further staffing decreases.

“The reason the judicial system has not been crushed during the pandemic is because we, the court employees, are there,” said Eric Allen, President of the Association of Supreme Court Reporters Within the City of New York. “If layoffs were to occur, and employees are not there, Lady Justice would not only be blind, she would be rendered paralyzed."

Note: this article has been corrected to accurately note the demographics for New York City judges dound in the October report.