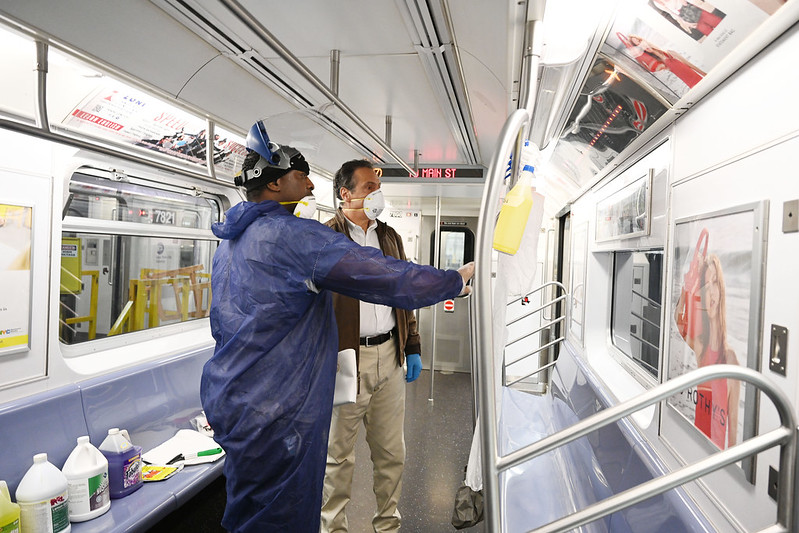 Every night since May 6, a small army of sanitation workers has mopped floors, wiped poles and turnstiles, and wielded electrostatic sprayers and ultraviolet lamps to disinfect New York City’s subway system.

The Metropolitan Transportation Authority expects to spend around $500 million on sanitization in response to the COVID-19 pandemic this year, and a similar amount next year, even as the authority faces the worst financial crisis in its history. The MTA announced on Wednesday that it may be forced to implement sweeping service cuts, including a 40% cut to subway and bus service, in order to save $858 million in 2021.

To facilitate the cleaning, the subway shuts down every night from 1 a.m. to 5 a.m. in the first planned shutdown in its 116-year history. The shutdown imposes heavy costs on late-night workers and on homeless New Yorkers, especially as the nights get colder.

The MTA and Governor Andrew Cuomo's office, which ordered the shutdown, say the disinfection program is a necessary public health precaution during a pandemic. But as a growing body of scientific evidence has shown that surface transmission of COVID-19 is extremely rare, transit advocates and MTA Board members have raised questions as to whether the cleaning is scientifically justified—and have received few answers.

In the early days of the virus there was some scientific disagreement, but in the past several months, a scientific consensus has emerged that COVID-19 is rarely spread through surfaces. “Spread from touching surfaces is not thought to be a common way that COVID-19 spreads,” according to CDC guidance, “Infections occur mainly through exposure to respiratory droplets.”

“I don't really think that they have an appreciable effect on the transmission of Covid,” Dr. Dean Blumberg, an infectious disease expert at the University of California at Davis, told New York Focus, referring to the MTA’s disinfection efforts.

“I think it's overkill. It's unnecessary,” Dr. Emmanuel Goldman, a microbiologist at Rutgers New Jersey Medical School, said. “Normal routine hygiene and maintenance is more than adequate to control this virus on surfaces. You don't need to go to these extremes.”

“It's not his fault, he's not a scientist,” Goldman added, referring to Governor Cuomo. “What the MTA should probably do is speak to scientists—there are plenty of them around in New York.”

Asked whether the MTA is speaking with scientific experts to review the effectiveness of the program, an MTA spokesperson wrote in an email, “We certainly have reached out to experts, and we are working with the U.S. Environmental Protection Agency.”

But in subsequent emails and phone calls, the MTA declined to name any scientific expert or group it has consulted, other than the EPA on disinfectants. MTA spokespeople also declined to provide details on the cost of the program.

Governor Cuomo's did not respond to repeated inquiries, other than to refer New York Focus to the MTA press office.

“The subway system has never been cleaner or better disinfected in its entire 116-year history as a result of the overnight closure,” Ken Lovett, senior advisor to MTA Chair and CEO Pat Foye, said in a statement to New York Focus. “We make no apologies for doing everything we can to protect customer health and safety during this once-in-100-year public health crisis.”

'Why was the Board not consulted?'
Journalists aren’t the only ones having difficulty finding information about the disinfection program. Transit advocates and even members of the MTA’s Board—who are nominated by the governor, with input from the mayor and certain county executives, confirmed by the State Senate, and are responsible for the authority’s governance—say they have also been left in the dark.

The governor announced the nightly closure and cleaning procedures at a press conference on April 30. The news came as a surprise to Andrew Albert, an MTA Board member and the chair of the New York Transit Riders Council.

“I sent the Chairman an email saying that I was blindsided by this. ‘When was the decision made and why was the Board not consulted?’” Albert recounted.

Board members were not notified in advance, Albert said, adding, “Well, maybe the ones that are friends of the Governor were.”

“This is the same story that we've been telling for the past several years,” said Eric McClure, the executive director of the transportation advocacy group StreetsPAC. “Which is that it's Cuomo’s MTA.”

Lisa Daglian, the executive director of the Permanent Citizens Advisory Committee to the MTA, testified to the MTA Board in June to ask for data about the effectiveness of its cleaning initiatives and for metrics on when to restart nightly service. Since then, she said, she has followed up to press for information but has not received answers.

The MTA has said that 24-hour service will resume “when the pandemic is over.” Daglian and McClure have both pressed for more specifics, as have reporters at many news outlets. “They need to give us some metrics and or a deadline for when they plan to do that. It seems really open ended,” McClure said. “We’re concerned that there is not really a serious plan to return the subways to 24-hour service.”

'We will see people die this winter'
Two days before he announced the shutdown, Cuomo held up a Daily News photo of homeless New Yorkers sleeping on subways at a press conference and said, “That is disgusting, what is happening on those subway cars.”

Many transit and homeless advocates say that Cuomo’s primary motivation in shutting down the subways was to address a flurry of negative tabloid coverage of homeless New Yorkers “ruling the subway.”

The shutdown has posed extreme difficulties for homeless New Yorkers who used to sleep on the subways, and who will face even greater challenges as the nights get colder.

“The subways provide a place where folks can at least stay warm overnight by resting their heads against the subway wall or sometimes lying on a bench. And it's a place to be, a place to sleep,” said Craig Hughes, a social worker at the Safety Net Project of the Urban Justice Center. “We will see people die this winter because they are pushed into freezing temperatures.”

In the early weeks of the shutdown, NYPD and Homeless Services met homeless people at end of the line stations, but the program—started by Mayor de Blasio—only offered 281 homeless New Yorkers shelter by the end of May and lacked follow through, according to Hughes.

“People were just dumped onto the stairs of Bellevue hospital. They were put on buses with no heat while the temperature was below freezing.”

A street homeless outreach worker, whose employer is contracted by the city and asked not to be named, said that the shutdown would be especially difficult for her clients in a winter during which, because of the pandemic, “they don’t have hospital ERs or 24-hour McDonalds.”

Late-night workers are also facing challenges. “There are a lot of people whose shifts end at midnight and they need at least an hour and a half to two hours to get home. And they're not able to do that,” said Felicia Park-Rogers of the Tri-State Transportation Campaign.

And many more riders may face dramatic service cuts, some of which could be averted using money spent on cleaning. The “deep cleaning” regimen is projected to cost $500 million this year, though some of that money may be subject to reimbursement by the Federal Emergency Management Agency (FEMA).

In addition to the cleaning costs, the shutdown is costing the MTA money in lost ridership revenue and bus costs. “Trains are actually running anyway,” Albert said, referring to the empty trains the MTA continues to run throughout the night. “We have this very expensive additional bus system. So by running the trains, you might actually end up saving some money.”

This story was published in partnership with New York Focus, an independent, investigative news publication covering New York state and city politics. Sign up for its newsletter here.