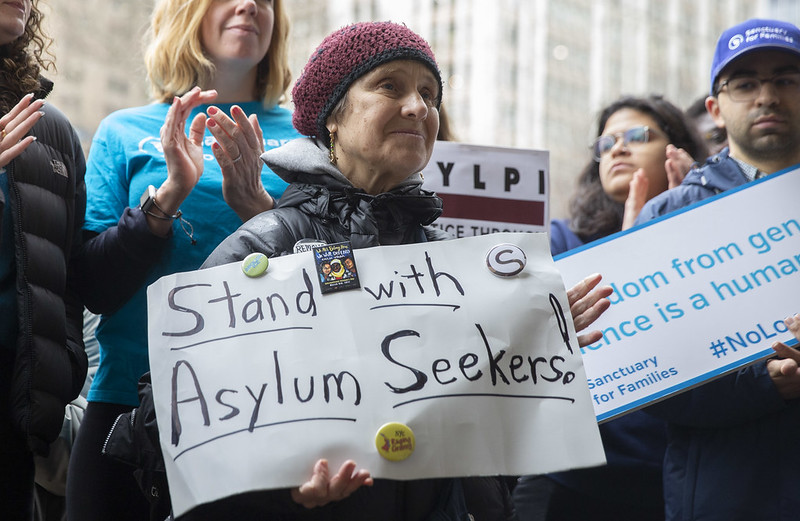 As part of a systematic dismantling of providing asylum to refugees in the United States, the Trump administration in October 2020 reduced the cap on resettling refugees in the country to just 15,000 for fiscal year 2021, which runs from October 1, 2020 to September 30, 2021, down from 18,000 for fiscal year 2020, and from 85,000 in the last year of the Obama administration.

These reductions have a significant impact not only on those seeking refuge in the United States, but also on New York, where many refugees often settle, whether in New York City or places including Erie County and Rochester, where there are significant refugee populations from countries such as Afghanistan and Democratic Republic of Congo. About 1,800 refugees are resettled every year and New York State provides millions of dollars in funding annually to refugee resettlement organizations.

Trump’s move to limit refugees -- people fleeing persecution and armed conflicts -- into the country is part of a larger administration push to limit legal and illegal immigration and to create a broadly xenophobic and nationalistic policy.

The outgoing Republican president, recently defeated by former Vice President Joe Biden, has repeatedly publicly railed against Congressional Rep. Ilhan Omar of Minnesota, who came to the country in 1995 as a refugee from Somalia.

Along with painting refugees as unwelcome outsiders, Trump has argued for the lower refugee cap by indicating he believes it would effectively give more jobs to Americans and save the federal government money.

These claims have been debunked: federal funding for each refugee resettled is limited to only $1,000 if the resettlement is done within or by 90 days, and refugees often initially fill low-skill jobs, with little discernible impact on the larger labor market.

President-elect Biden, a Democrat set to take office January 20, has promised to work with Congress to ensure the United States admits a minimum of 95,000 refugees each year. On June 20, commemorated as World Refugee Day, Biden pledged he would increase the number of refugees admitted to the U.S. annually to 125,000, which would be a historic high.

But it could take months to years to be able to start admitting so many refugees, mostly because so few are in the pipeline after Trump’s policies. To be admitted into the U.S., refugees go through several rounds of background checks, screenings, and interviews under U.S. Citizenship and Immigration Services as well as ongoing vetting by a variety of intelligence agencies including the FBI and CIA. This process can take up to two years.

Along with the damage inflicted on those seeking refuge in the United States who won’t be allowed to resettle in this country, the decimation of the United States’ refugee program and its impact on New York has largely left refugee resettlement agencies dealing with the fallout.

But another significant challenge came from the current state budget, passed in early April amid major coronavirus-related challenges and question marks. Funding for the New York State Enhanced Settlement for Refugees Program (NYSESRP), which supports these non-profit agencies, was slashed by $1 million, cut in half from the $2 million allocated the previous year. Advocates have called for an increase to $4.9 million, but the state’s cuts have compounded the financial pressure on both NYSESRP agencies and agencies that don’t come under the NYSESRP. The state funds at least 11 organizations that have worked for a significant amount of time in refugee resettlement.

Shelly Callahan, Executive Director of The Center, a non-profit NYSESRP agency located in Utica, New York, said everything is in a state of flux at this moment. “Even if Biden wins, the damage this administration has done cannot be undone,” she said in late October. “To get back to the point where we can settle 110,000 refugees a year, it’s going to take a lot of time. We went from resettling 400 refugees before the cap was reduced, and this year we did 104. We also have huge lack-of-workforce issues across the state, we also get secondary migrants — refugees who come from other parts of the country. We’re not keeping at pace with the population growth that we need in these areas.”

There are high rates of secondary migration by refugees to New York, mostly from Texas and Tennessee, according to Callahan. While The Center and other resettlement agencies provide services to them as well, it is an additional stressor and a great deal of work for which they don’t receive funding from the government. New York is recognized as being hospitable and welcoming to refugees (and immigrants generally), and the NYSESRP funding was instituted after the Trump administration's actions in 2017.

“For an agency like mine $2 million [in the state budget] meant $200,000 a year,” she said of the portion of overall state NYSESRP funding that her agency received until last year. “Even though the number of refugees has been cut significantly, our services have increased, especially when covid happened. But now, we have to find money from other places, reduce programs, and that won’t be good for the community.”

As for non-NYSESRP agencies, Isabel Miller, Executive Director at Saint’s Place, based in Pittsford, New York, is relying largely on donations from loyal philanthropists and emergency covid grants from the state. “When the [refugee] numbers started to decline, we made a pivot to focus on refugees that have already been resettled,” she said. “We haven’t had to stop our programs, though part-time staff were let go. Our peak was about four years ago where we helped 1,200 refugees, most from Cuba and Afghanistan. Once the latest lower cap was put into order, we are expecting maybe 120, and only 30 have arrived so far.”

“The pivot we made to focus on existing refugees in the area was not due to lack of funding, it was lack of refugees,” Miller continued. “If we didn’t make the pivot, we would not be of any use. We hear in different areas that people have cut back on staff significantly. We have a lot of volunteers of 150 refugees who help us, and just five others on staff. There are many refugees who have been vetted, but are not allowed to come into the country, so they’re just waiting.”

Anthony Farmer, a communications officer for the state’s Office of Temporary and Disability Services, under which the New York State Enhanced Services to Refugees Program (NYSESRP) functions, said that the program was created in response to the federal government severely limiting refugee admissions, something no other state has done. “NYSESRP has enabled refugee resettlement agencies across the state to continue actively serving refugees, in spite of the federal government’s callous action, with some even expanding their scope by serving refugees who have resettled more than five years ago,” he said in a statement.

State Senator Andrew Gounardes, a Brooklyn Democrat who has led the effort to increase state funding for resettlement and whose district is home to many Syrian refugees, among others, said in a statement to Gotham Gazette: "The gap in funding for refugee services will affect not just these families but the local economies of the communities in which they live. It is urgent that funding be restored as soon as possible."

Donald M. Kerwin Jr, Executive Director of the Center for Migration Studies, believes that “minimal infrastructure” must be in place for Biden to be able to successfully keep his promise to increase refugee numbers. “By minimal infrastructure, I mean vetting, the procedures that ideally shouldn’t take years,” he sad, “and a smoother process for them to resettle.”