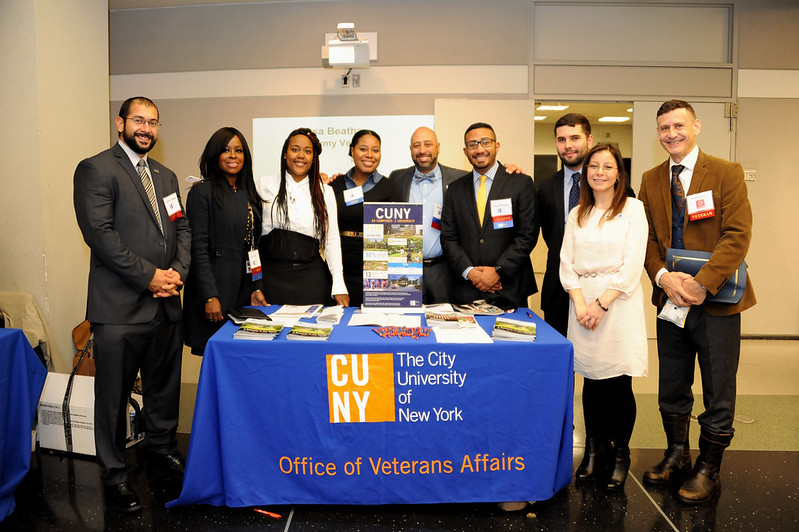 Amid the coronavirus pandemic, Thomas Donaldson pondered whether to take out a loan or pay his master’s degree tuition bill with a credit card. As a military veteran whose government benefits had run out, a husband, and a father paying his way through his education seemed impossible, even with his NYPD salary.

In an effort to meet this need for higher education tuition help that many veterans face, the newly-created Beshar Scholars Military Service Award offers student veterans at CUNY’s John Jay College both financial and moral support as they pursue their degrees.

Created by Sarah and Peter Beshar, the $2,500 scholarship is open to matriculated undergraduate and graduate student veterans and active duty members who demonstrate financial need, maintain at least a 2.0 (undergraduate) or 3.0 (graduate) GPA, and demonstrate good character. Of the 530 veterans enrolled at John Jay––which has been deemed “military friendly” with a Bronze distinction by veteran-led small business Viqtory––the 2020 Beshar scholarship was awarded to 10 students.

The Beshars say one motivation to fund the award is a desire to “meet the moment.” “We do feel very strongly that John Jay is such an amazing institution and has an incredible array of wonderful veterans in all sorts of different disciplines,” Sarah Beshar said in an interview. “We know that this is a really tough time in New York, so it just felt right to bring those different focuses together.”

Peter Beshar, who serves as a Trustee and Chair of the Veterans Committee at John Jay, pointed to the very practical need to ease financial burdens for military veterans and current service members trying to earn their degrees, while showing gratitude for their service. “What's motivating this is that we want the student veterans and military students to feel seen and to understand that there are so many people who are rooting for them; that hopefully that makes them feel empowered and ready to overcome some of the obstacles that either the commitments that they have in their life with working––many of these students are working concurrently––or have been caused by the pandemic,” he said.

For recipient Lorraine Gonzalez, a Private First class 42A Human Resource Specialist for the Army Reserve, the Beshar scholarship allows her to complete her education while also relieving her disabled father, who is also a veteran, of contributing to her tuition payments. Following in her father’s military footsteps and aspiring to make him proud and to make her own way, she detailed the scholarship's impact in a profile interview with John Jay, saying, “I want him to see how dedicated I am. I want to be a role model for others. I want to show him that all the sacrifices he made for me didn’t go to waste. I want to be great for him. This award has cleared the path for me to succeed in life. Because of the Beshars’ generosity, I’ll be able to earn my degree and achieve my dreams; and my dad will be able to enjoy his retirement in peace.”

Gonzalez explained to Gotham Gazette that as a member of the Reserve, her active duty service hours do not yet add up to the minimum service requirement to be eligible for the G.I Bill. The Beshar scholarship works to fill in the holes that veterans assistance programs don’t, such as cases like Gonzalez’s.

With the scholarship, the Beshars also intend to assist in the process of veterans integrating into civilian life. “We have a civilian world on one side, and a military world on the other side, and these two groups don't actually intersect as much as they should,” Peter Beshar told Gotham Gazette. “It's hard for a veteran to capture on their resume the skills that most employers might look at...They can be...extremely humble and understated about the rather remarkable things that they've done in the course of their military careers. Trying to urge them to be a bit more expansive about the types of projects that they undertook when they served in the armed forces, that then I think when they say that, it really triggers in the HR department or the person who's looking to hire folks, a better appreciation for the breadth of their skills. Project management, leadership, communication skills."

In an interview, Donaldson discussed the difficulties of transitioning out of the army  “In June of 2009 I was in Northern Iraq. I was in a very dangerous area. I was in charge of 11 other people and $4 million worth of equipment. Fast forward to September of 2009, I'm living on Long Island, and I'm going to community college with 18-, 19-year-old kids and it's a culture shock,” he said. “All your friends––my brothers that I spent six years with, I spent every day with, we ate together, we slept in the same room together, we worked together, we had Thanksgiving dinner together––I left them. It was like ripping off a Band-Aid and it was very difficult. And while the military may make an attempt––between resume writing classes or interview classes––they don't prepare you for that.”

The Beshar scholarship allows Donaldson to balance his responsibilities and get a degree that he hopes will help him one day develop an efficient and reasonably-priced plan to protect schools, he said, while also providing him with a sense of support. “I think a lot of times people feel that there's a lot of benefits and [veterans] are OK, we're handled, somebody else has got it,” he said. “When people come out and kind of bridge that gap, it's amazing. I'm very humbled that I got the scholarship and to be a part of what these people do.”

For recipient Dr. Michael Isom––who, with a 20-year military career, is a retired major in the U.S Army National Guard, a counselor in Alaska, and graduate student in forensic psychology––his degree will help him achieve his goal of further protecting the Alaskan Native community. “I have worked with the Alaskan Native American Indian population on child abuse and neglect cases throughout the tribal system here in Alaska,” he said. “What this scholarship is allowing me to do is continue to support our indigenous population in a way that they'll have, hopefully, someone who is skilled and culturally sensitive, and understands the needs of tribal sovereignty and also tribal family constructs, in the legal system to protect their rights as families and tribal members.”

He told Gotham Gazette that the award served as a “circular” moment for him, reflecting on his parents; when he was younger his mother was incarcerated and his father was an aspiring attorney in California. “The scholarship is coming from an attorney who’s practicing, and who, in essence, is how my mother––and I’m not blaming the legal system, my mother committed a crime and she must atone from that––but it's the same system that was established that wound up having my mother placed in jail for 10, 13 years of my life. Being a defense attorney, as the granter is, and having to go through that process, I think it is circular."

In an interview with John Jay, Peter Beshar told a story of a military phrase he heard during his time as a Special Assistant with the United Nations. “Each year, the Army invites 100 civilians to join senior members of the military—typically Colonels—as they complete a nine-month course in strategy, leadership, and military history. I was assigned to a “full bird” Colonel [the insignia for a full Colonel is an eagle] in the Air Force. He was seated directly behind me for the opening session. Just as the program began, he leaned in and said, ‘I’ve got your six.’”

That notion, Peter Beshar told Gotham Gazette, is at the core of the motivation to create the scholarship. “These brave men and women in the armed forces have had our six, they've had our back for all these years. It just seemed so obvious and natural that now it's our turn to have their back and give them support. These scholarships are so modest in scale compared to the need, but as Sarah says, particularly with the pandemic, at least it's a step to make veterans' lives a bit easier at John Jay.”