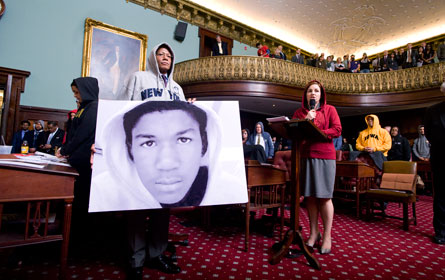 “It’s not easy for a visually impaired person to get around New York City today,” said Councilmember James Vacca, who chairs the Council’s Transportation Committee.

The councilman recalled his blind father listening at street corners for the sound of approaching cars to know when he could cross. Nearly 200,000 New York City residents suffer from visual impairment.

The other bills (Intros 449-A and 745-A) would include the right to a wheel chair accessible car to the livery passenger’s bill of rights and require that the Department of Transportation inform people with disabilities about changes to sidewalks because of construction on its website.

The Council also voted to override the mayor’s veto of two parts of the Fair Parking Legislative Package passed in January. One of the package’s provisions (Intro 490-A) called for traffic enforcement agents to automatically cancel parking tickets issued while the driver was getting a pass from a Muni-Meter.

The mayor contended that the bill would lead to illegally parked drivers trying to cheat their way out of tickets. Council Speaker Christine Quinn said that this would be impossible because those getting a ticket would have to provide a Muni-Meter pass issued no later than five minutes after the ticket.

She added that giving a reprieve to someone ticketed while trying to get a parking pass was simply common sense.

Another of the package’s provisions (Intro 747) prohibited the city’s practice of putting stickers on vehicles in violation of the alternate side parking rules. Mayor Bloomberg said that this practice helps keep New York’s streets clean. But Speaker Quinn said that the mayor’s past Street Cleanliness Scorecards don’t support that claim and added that the hard-to-remove stickers are an unnecessarily harsh punishment.

The mayor is also expected to veto another bill the Council passed today that would require a prevailing wage for maintenance and security employees at certain buildings developed or leased by the city government.

Under the legislation (Intro 18-A) employees at buildings where the city leases a majority of the space and at least 10,000 square feet, and projects that receive at least $1 million in city funding, would be eligible for the prevailing wage. The bill would raise the wages for more than 100 workers by more than 35 percent at qualifying buildings that are not fully unionized.

Speaker Quinn said that the Council was concerned about the possibility of non-unionized workers with lower salaries dragging down the wages of other workers in the building services industry â€“ an industry that provides jobs for the city’s working class people.

“We should be treating workers fairly by paying them a decent wage. Our taxpayer dollars shouldn’t go toward undercutting working families in a race to the bottom,” the speaker said.

The wage increase would come at minimum cost to the city, according to the Council, and would amount to less than one percent of what the city spends on leasing office space.

The Council also passed the proposed redevelopment plan for the former location of St. Vincent’s hospital in the West Village.

Several residents of the community booed the decision from the upper balcony of the council chambers.

Speaker Quinn said that the redevelopment project would include an intensive care center to replace St. Vinvent’s. But Councilmember Charles Barron said that the facility was not big enough or properly equipped to replace a full service hospital. He called the project a case of the city government capitulating to rich private developers.

“You have a community that now needs to travel too far to get basic medical services. This is a life or death matter,” said Barron, who, along with other council members, was wearing a hoodie in a show of support for the family of Trayvon Martin.

Several members of the Council participated in a remembrance ceremony on the steps of city hall before the council meeting for Martin, an innocent teenager shot in Florida last month by a community patrol officer.

The Council passed a resolution supporting the federal Justice Department’s investigation into Martin’s killing. In addition, the Council also passed two other resolutions urging the state government to pass the Dream Act and the New York Dream Fund Commission for the children of undocumented immigrants.