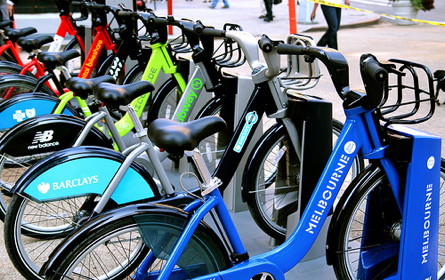 NEW YORK â€“ On a recent Sunday afternoon at the outdoor flea market along the Williamsburg, Brooklyn waterfront two blue bikes splashed with the Citibank logo stood under a tent awaiting riders.

As hundreds of people walked among the flea market vendors, a few peeked in to check out the cycles. One guy said the bikes "ride pretty smooth."

The unisex, 3-speed, bell-and-light-laden upright bikes were being demoed to give New Yorkers a chance to try out the city's big bike share before it gets up and running later this summer.

Once it has been completely rolled out, the program will likely be the largest of its kind in the nation â€“ and New York City will have finally joined other cities in the U.S. and in Europe, where such systems have been around for years.

If the $41 million program makes it in the city, it could potentially transform the way that New Yorkers get around the metropolis with hundreds of thousands of new bike trips being taken each year.

But will the Big Apple's collective psyche shift from the bike being perceived as a tool of recreation and exercise to that of a more utilitarian or alternative form of public transit?

Will it be safe, in a city that is notoriously peevish toward cyclers?

Simply put, will the share program usher in broader acceptance of the bike?

Josh Moskowitz, project director for the Capital Bike Share program at the Washington D.C. Department of Transportation, has no doubt that the answer to that question is an "unequivocal yes."

"We've seen daily bike trips in D.C. grow from 3,600 rides per day in 2011 to 6,800 rides per day so far this year," Moskowitz said, adding that DC commuters often jump on bikes near subway stations to complete their jaunts to work.

A NEW FLEET OF PUBLIC BIKES

New York's  24-hour-a-day program, known as Citi Bike Share, will eventually include 10,000 bikes and 600 bike-docking stations throughout parts of Manhattan, Brooklyn and Queens.

The solar-powered, wireless docking stations will be located on sidewalks, curbside road spaces, plazas and other locations suggested through a community-driven process.

Each station can accommodate between 15 and 60 bikes. They are self-contained and require no utility connections. Installation can be completed in minutes.

Oregon-based Alta Bike Share will be running the system and splitting profits with the city.

Annual memberships cost $95. There will also be price options for day and weekly memberships. Members must be at least 16 years old and are entitled to unlimited use of the system for individual bike trips of up to 45 minutes.

It is generally assumed that, like the D.C. program, Citi Bike will likely be used primarily for short trips. The DOT says around 54 percent of all "trips" taken within the city are between two points less than two miles apart.

"The city has no additional exposure related to the bike share," he said. "Other bike share cities have not had claims either."

The nonprofit Transportation Alternatives, which advocates for better bicycling, walking and public transit, had been advocating for a bike share program in New York for years.

The group even conducted focus groups before talking to the DOT and city planning officials. Efforts for a large-scale bike share were based in great part on the belief that such a program would lead to a more bike-centric New York City, much like the situation the group had witnessed during a visit to Paris in 2008.

Most of Paris' 273 miles of bike lanes within the 40.7-square-mile city were built after 2001. But, eventually, transportation officials realized that most Parisians simply didn't get what the lanes were for.

"They didn't have a culture for commuter cyclists," said Caroline Samponaro, director of bicycle advocacy at Transportation Alternatives.

Since 2007, when the bike share program was introduced, the City of Paris has seen a 41 percent increase in the number of cyclists on its streets. A recent proposal before the Paris City Council called for expansion of the bike lane network to 435 miles.

Samponaro thinks the city could see a similar reaction.

"Given its geography, the distance of our trips thanks to high density, New York City has the potential to be the biking capital of the world," she said.

She reasoned that when you don't have a bike, and you see all the new bike lanes you may wonder, hey, what does this have to do with me?  What's the point of this? But suddenly with the bike share, observers who may not have cycled in the city before will experience eureka moments where they realize that they too can use the bike lanes.

The city is committed to having 1,800 bike lane miles on streets, parks and paths by 2030, according to a 2012 Department of Finance briefing paper. The DOT plans to install 50 lane miles each year until the citywide network is complete. The 2012 DOT fiscal budget includes over $6 million â€“ mostly federal funding â€“ to expand the network.

But Samponaro said one key to full saturation of all those lanes might be the full integration of the bike share with public transit. A key model is the Paris bike share, Velib.

The program has six bike stations around each of the city's 385 metro stops, according to Thomas Valeau, who was in charge of the bicycle project in Paris for JCDecaux, the vendor that runs the program there.

Valeau, who now manages customer relations for 14 similar programs in cities across France, said the Paris system made for a very dense network.

"Many customers use our bikes for going to work, and take a bike in the morning for going to the closest metro, then take the metro and/or finish their trip by bike or walk to their final destination," Valeau said.

Perhaps the biggest obstacle standing in the way of fully tipping New York's collective psyche towards cycling are the perceptions that is unsafe.

That includes safety for bicyclists, as well as the safety of pedestrians.

But the DOT statistics also show the number of New York cyclists quadrupled over the last decade. During that time, the rate of risk to cyclists was down by 75 percent.

Still, New York bike lanes are pocked with hazards in certain parts of town. As any cyclist will lament after a rush hour trip down a bike path on Broadway between 42nd and 14th streets, the green strips clearly marked for bikes often turn into sidewalks, filled with talking, texting or camera-wielding pedestrians.  That, coupled with occasional errant delivery men on bikes heading the wrong way or a car that turns in front of a cyclist, the lanes can be rife with potentially hazardous situations.

Observers from Stringer's office charted 741 instances of pedestrians encroaching upon bike lanes, including over 275 occurrences of motor vehicle blockages, among them police cars and school buses.  The study also found 242 cyclists riding the wrong way in a bike lane; 237 cyclists riding through red lights; and 42 instances where cyclists rode on the sidewalk on streets with a bike lane.

Stringer's office hasn't collected data on bike lane congestion since the 2010 study, though a spokeswoman said the office knows from recent reports that safety issues related to cycling continue to be a concern for New Yorkers.

At a February 2012 City Council hearing on traffic enforcement, the executive officer of the NYPD Transportation Bureau, Deputy Chief John Cassidy, said the police issued 48,556 summonses to bicyclists in 2011. The Department only issued about half that number, 25,000 tickets to truck drivers.

The NYPD did not respond to repeated requests by phone and email for comment.

"It is a fact in major urban areas that less people opt to ride simply because they do not feel safe," said Ryan Zagata, founder of  bike company Brooklyn Cruiser.

But he said education is critical. Zagata also said cyclists have an obligation to obey all traffic laws, as if they were driving a vehicle  â€“ and that includes riding with traffic as well as stopping at all stop signs and lights.

Jim Brown, communications director for the California Bicycle Coalition, said with all the new cyclists or cyclist trips each day on city streets, the new bike share program has the potential to eliminate at least some hazards since more bikers on the road ultimately affect traffic speed and pedestrian patterns.

"It's well understood that increased bicycle ridership correlates to a lower incidence of collision between cars and bikes," Brown said.

Still, he said in places like New York that are making fast strides with bike planning, it may still take time for cyclists, drivers and pedestrians to figure out how to share the road effectively.

For its part, the DOT said it continuously works with the NYPD on cyclist safety in general and it did so during the planning of the bike-share program as well.

In one list of rules from the DOT, taxi cabs drivers are told it is illegal to drive, stop or park in a bike lane and punishable with a $115 fine. Drivers are cautioned that  "dooring" â€“ opening of doors onto a bike lane â€“ can be fatal. And drivers are expected to yield to cyclists when turning.

As Transportation Alternative's Samponaro noted, the streets haven't been so fundamentally changed in close to 50 years.  She said the bike share will show New Yorkers whether or not biking is something that makes good sense to them.

"People are used to doing things a certain way but pedestrian lanes, dedicated bus lanes and safe bike lanes are all essential to keeping the city moving forward, " she said.