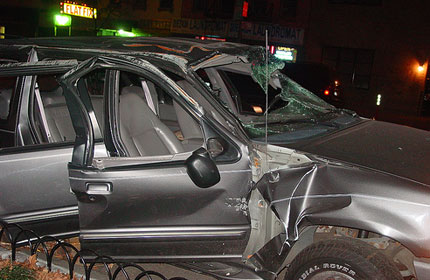 "If you ever need to kill someone in New York City, do it with a car," Aaron Naparstek recently advised on the urban planning news site Streetsblog.org.

Rather than offering a tip to murderers, Naperstek was making a rhetorical point. He is one of many livable streets advocates who have started to see traffic laws, and their prosecution and enforcement, as the next front in the sustainable-transportation fight -- and with good cause. Since the start of this year, a spate of high-profile pedestrian crashes has grabbed headlines, irreparably altered the lives of those close to the victims and gone all-but-unpunished.

On Jan. 6, 9-year-old Ibrahim Ahmed was killed in a crosswalk in Ozone Park, Queens. Alexander Aponte, who hit the boy, was driving City Council candidate Mike Ricatto's campaign bus and had a suspended license. He raced to beat a red light and struck Ibrahim in broad daylight. Aponte did not face charges in the boy's death. He was arraigned for driving with a suspended license.

Two weeks later, preschoolers Diego Martinez and Haley Ng were killed on a Chinatown sidewalk while walking with chaperones and classmates. A delivery van left unattended and in reverse by its driver, Chao Fu, hopped the curb killing the two children and injuring 11 others. Chao was not charged.

Even when drivers who kill pedestrians are prosecuted, sentences are often little more than a slap on the wrist, according to many of the victim's families and safe-streets advocates. They cite the case of George Andersen, the CEO and founder of a software technology company. In January, he received a 16-day weekend jail sentence, 250 hours of community service and a $350 fine after killing Florence Cioffi with his Mercedes SUV. Anderson was driving at 60 mph through the narrow streets of downtown Manhattan when he struck Cioffi. He fled the scene. When he eventually returned, he refused a breathalyzer. Hours later, when an intoxication test was finally administered, it confirmed that Anderson had been driving drunk.

"The city doesn't take traffic enforcement seriously enough," said Wiley Norvell of Transportation Alternatives. "The Bloomberg administration is doing a great job building bike lanes and pedestrian spaces, but without real efforts from the NYPD, the district attorneys and legal reform from Albany, changes to the built environment can only do so much to keep New York City pedestrians safe."

Advocates see the steps for reducing the deaths as bound in a circle: Tougher laws would allow prosecutors to do more in the courtroom, which would motivate police to investigate aggressively, which would give prosecutors more to work with, which would validate and inspire tougher laws, which would empower police, and so on. Accordingly, these advocates want to address each component of the problem in hopes of affecting the entire issue.

Steve Hindy, who became an advocate for street safety after his son was killed in a cycling crash in 2007, cites the 2008 investigation of Rasha Shamoon's death as illustrative of shortcomings in police procedures. In an open letter to Police Commissioner Ray Kelly, Hindy wrote, "When she was struck and killed by an SUV traveling northbound on Bowery, police interviewed the 21-year-old driver and his two young passengers who blamed the unconscious and dying woman. No other witnesses were interviewed, even though several people reported the crash to 911. No skid marks were measured. Remarkably, although the SUV driver had six prior motor vehicle convictions, he was allowed to leave the scene after giving a statement."

Hindy's letter goes on to ask for a more comprehensive accident-report form that would prompt officers to thoroughly investigate such incidents. He believes that if prosecutors had additional information, they could bring more appropriate charges against drivers who kill. The police department has yet to respond to his letter.

Even when there is enough evidence to charge a driver involved in a fatal crash, prosecution can be difficult, according to a 2004 interview with Maureen McCormick, who now leads the Vehicular Crimes Unit in Nassau County, but was in the Brooklyn district attorney's office at the time of the interview. According to McCormick, under current laws, "a criminal prosecution requires showing that the motorist ran the red light because of more than carelessness or inadvertence." This requires determining the driver's state of mind, and that, she said, "is a difficult thing to prove. They don't generally yell out 'I'm going through this light on purpose.'"

Peter Goldwasser, general counsel at Transportation Alternatives said that proving criminal negligence, then, often involves applying the 'rule of two' to show that a driver acted with a sufficient disregard for the safety and well-being of other road users. "An assistant district attorney believes that in order to convict a driver of criminally negligent homicide, that person must have committed at least two simultaneous and unrelated traffic violations, regardless of how dangerous one violation may be. Now, it's my opinion that this is case law based on an incorrect reading of a 50-year-old court decision, nonetheless it has guided prosecutors for some time," Goldwasser said.

In addition to protesting at the district attorney's offices and peppering district attorney candidates about these issues, the families of victims and advocates have started pressuring lawmakers in Albany to reform the legal system so that drivers who kill pedestrians can be charged more easily.

Paul Steely White, Transportation Alternatives executive director has cited Oregon's "vulnerable user law that 'requires the court to impose sentences of traffic safety course, community service, fines of up to $12,500, and suspension of driving privileges for one year," if a driver injures or kills a pedestrian or cyclist while driving carelessly.

At the behest of his constituents and in the wake of Ibrahim Ahmed's death, Assemblymember Robert Sweeney introduced legislation that would "penalizes crimes of vehicular assault and vehicular manslaughter as felonies when such crimes are committed while driving with a suspended or revoked license."

Advocates insist that these and other reforms, like more comprehensive analysis of traffic violations and legislation similar to Manhattan Borough President Scott Stringer's proposal for installing speeding and red light enforcement cameras throughout the city, also are essential to making streets safe for pedestrians.

Although efforts are underway on many fronts, that's hardly a salve for those most-affected by unsafe streets. Earlier this month, about 70 New Yorkers joined the families of Hayley Ng and Diego Martinez, the two preschoolers killed struck and killed by the van in Chinatown, to demand that the Manhattan district attorney's office convene a grand jury to fully examine what happened on the tragic morning of Jan. 22 when these two youngsters lost their lives.

It was a tear-filled gathering rife with emotional pleas. "Accidents happen, but someone still bears the burden of responsibility," Lauren Ng, Hayley's cousin, said to the morose crowd. "What kind of city is this that does not protect its most vulnerable citizens?" she asked.

Jon Adler, speaking on behalf of the victims' families, demanded that the district attorney find something, "even if it's a misdemeanor, something to charge this man for making that decision, to leave that vehicle on."

It seems that no one could understand how justice had been served.

Haley's aunt, Sui Der, told CBS News, "This will haunt us for the rest of our lives. The happiness in our family is totally gone. We were a happy family."

Speaking on the phone a few weeks after the rally, Adler said, "Unfortunately, there has been no immediate sign of progress among those who claim to be concerned. Hopefully, working with groups and those who truly are concerned, we'll be able to bring about real change."

Certainly, families and friends who have lost loved ones agree.