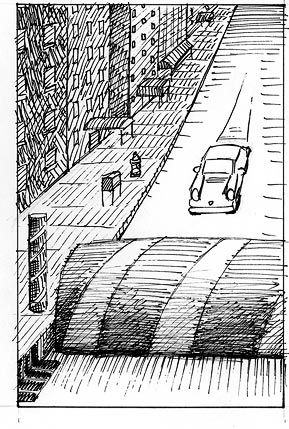 For years, Moseley Avenue in the Annandale section of Staten Island was a dead-end street, probably not very attractive to speeding motorists. But last year, the street was connected to Richmond Avenue. Shortly thereafter, while most of Moseley remained two-way, one block was turned into a one-way street.

And that, residents told the Staten Island Advance, started the problem. Drivers do not see the sign alerting them of the one-way street, enter the wrong way and then speed through in an effort to get out. The issue came to a head when a driver going the wrong way on the street hit four parked cars.

To solve the problems residents want better police patrols — and speed humps, little hills in the road designed to slow traffic. The neighborhood has appealed for the humps — known in transportation circles as a traffic calming device — but a spokesperson at Community Board Three in Staten Island said the application is still pending.

According to the city Department of Transportation, speed bumps, about 12 inches wide and three to six inches high, force traffic to slow to about 15 miles per hour. Because they can damage cars and cause motorcycles and bicycles to lose control, they have been replaced on city streets by speed humps, which are as wide as the street, slightly longer than an average car and slow traffic to about 25 miles per hour.

Transportation Alternatives says that calming devices, such as humps, provide the best means of slowing traffic. Unlike traffic signals which are designed to control traffic flow, bumps and humps were developed to slow cars. And they do not need a police presence to make them work.

But traffic calming has created groups of opponents who are anything but calm about the prospect of bumps or humps being put on their streets. "In a democracy you punish the guilty," one such opponent told a reporter. "Speed bumps punish everyone."

When a city tries to install a speed hump, "you generate complaints from neighbors who want to speed," Transportation Alternative Executive Director John Kaehny says.

To try to get a speed hump installed, the transportation department advises writing to the commissioner of transportation at 40 Worth Street, New York, NY 10013. It suggests applicants provide evidence of community support, such as petitions, a resolution passed by the community board, or a letter from a local elected official.

The department says speed humps should go only on local or residential streets — and definitely not on bus routes, truck routes, snow emergency routes or other major thoroughfares.

But Kaehny says that, despite such advice on the department web site, it does not have specific guidelines for speed humps, nor are there federal guidelines that it can rely upon. Without that, he says, city officials do not have the ammunition to fight speed hump opponents and so have been reluctant to install them other than around schools.

About 95 percent of residents may support a speed hump, he says, but "the very vocal minority can carry the day when it comes to stopping things in New York City."

(Do you have problems with speeding drivers in your neighborhood? Tell us about it by going to the Community Gazette for your area.)