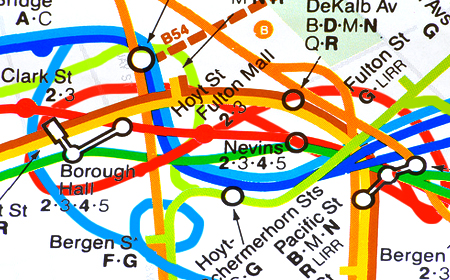 An aura of exasperation hung over Senate Majority Leader Malcolm Smith and Assembly Speaker Sheldon Silver as they left a leaders meeting on Monday evening. The topic was a plan to rescue the financially strapped Metropolitan Transportation Authority, and as they spoke to reporters it quickly became clear that their discussions had not produced an obvious way forward.

"It's not about merit, it's just about what gets us there with the votes that we need to get it passed," Smith told reporters.

His statement confirmed the fears of many transportation advocates and straphangers. The negotiations to address the MTA's finances and the impending fare hikes and service cuts no longer center on the best way to address the problem. Instead they are about how to appease fickle legislators who are taking advantage of the slim Democratic majority in the Senate.

After the leaders departed, Gov. David Paterson came out to briefly address reporters. He was dripping with frustration. "I think the issues could be resolved," said Paterson. "But the issue of voting seems to be the major issue, and I'm somewhat just offended by that at this point, because as professionals we've got to resolve this. Every day that we don't we're losing money."

Paterson arranged the leaders meeting in an attempt to devise a plan that he and both legislative leaders could agree on. Not only did Paterson's attempt at consensus fail, but it also became clear on Tuesday that Smith's effort to force a rescue plan through the Senate this week would not work. Changes made to the bill in committee probably mean the bill cannot be voted on until next week.

The bigger issue could be that a majority of senators cannot seem to reach consensus on any significant rescue plan. Meanwhile, in his desire to get something -- anything -- through the Senate, Smith seems to be trying to push measures without approval from Paterson and Silver —a move that does not sit well with the governor and his aides.

Advocates, who remain ever hopeful, have lowered their expectations as the clock ticks down to doomsday. Early on Monday the MTA had more sobering news about its finances: Its deficit will increase by $621 million even after pending service cuts and fare hikes are implemented in June. "Without assistance from Albany we are back to the only weapon in our arsenal," said an MTA spokesperson. "We are back to service cuts and fare increases."

Experts have proposed solutions to the MTA's financial problem, but all would require politicians to make some hard decisions.

Last year Paterson announced his support for the Ravitch plan, which was designed to bolster the MTA's finances by instituting a payroll tax in the 12 counties that are served by the MTA; instituting approximately $5 tolls on the East River bridges and smaller ones on the Harlem River crossings; and moderately increasing fares. The idea was to have all interested parties pitching in to support the MTA. When it became clear that a number of politicians would not support $5 tolls , Silver offered up a compromise version of the Ravitch plan that would toll East River bridges at $2, or approximately the amount of a transit ride.

Things quickly fell apart in the Senate, though. A number of Democratic senators refused to support any plan that featured tolls on the East River bridges. Smith cobbled together another plan, which was mocked by critics as being a half measure. It did not include tolls but had a payroll tax and proposed moderate fare increases. Many questioned whether these measures would produce enough money to prevent the dreaded fare hikes and service cuts. Smith countered that the MTA's long term funding problem might not be as dire as the agency has claimed. He insisted the Senate needed more time to explore the MTA's finances and called for more auditing and further regulation of the authority.

Advocates feared that the plan would fracture the idea of shared sacrifice. And it did. As talks continued, suburban Senate Democrats said they would not vote for any plan that included a payroll tax. Then, early last week Smith introduced a new plan that featured a payroll tax, fees on driver's licenses and vehicle registrations, a tax on rental cars, the stipulation that the Senate could audit the MTA and what proved to be a very unpopular $1 per drop-off fee on taxi drivers. Many legislators said the plan was dead on arrival.

So with the MTA's finances deteriorating and with the Senate clearly at an impasse, what can we expect the legislature to do?

"It's the kind of question everyone has been trying to avoid answering," said Neysa Pranger of the Regional Plan Association, "either because we don’t like the outcome or we don’t know the answer."

As the negotiations have gone on it has become increasingly clear that Smith does not have the votes to pass a serious solution that addresses the MTA's finances in the long term or even the significantly weaker plans he has presented. Pranger fears a watered down, short-term fix may be all the Senate can muster.

"They can implement a short-term fix and that gets us back where we started," said Pranger. "The MTA's finances have gone downhill quickly." She said the agency's announcement of its deepening woes should underscore the problem.

Pranger said she thinks legislators, including Republicans, need to make hard choices now. "They might as well just do it now and make unpopular choices far enough away from the election cycle," said Pranger.

It is difficult to know, though, what that plan might be. Currently at least four Democratic senators will not support any plan that includes a payroll tax. More Democratic senators say they won't vote for a plan that contains bridge tolls. There also is growing resistance among legislators to the $1 per drop-off fee on taxi drivers. A brigade of yellow cabs from New York City circled the capitol on Tuesday to protest it. The fee is designed to provide funding to upstate roads and bridges since Republicans have said that they can support an MTA rescue plan only if it includes funding for upstate roads and bridges.

Advocates have been steadily applying pressure on legislators and raising public awareness. They have held funerals for the subway and had transit riders send their legislators mock invoices for the cost of the fare increases they may have to endure. The Facebook page 1,000,000 People Against the NYC MTA Fare Hikes was created, as its name suggests, to organize actual demonstrations that have taken place in Albany and New York City. And then there are those ubiquitous "WTF?" MTA posters.

"This campaign has been going on since November, and that is part of the reason why the pressure is still going," said Pranger, "People are saying, 'This is MTA doomsday and we don't want this.'" Groups involved in these actions go well beyond transit advocacy groups and include the Working Families Party the United Federation of Teachers.

Mayor Michael Bloomberg, after being criticized by the New York Times and others for not heavily lobbying Republican legislators to support an MTA bailout, also got into the act this week. Bloomberg signed a letter with United Federation of Teachers' president Randi Weingarten and Partnership for New York City president Kathryn Wylde asking legislators to move on a bailout plan. Jimmy Vieklind reported in The Politicker that aides to Smith are currently negotiating with representatives of the mayor’s office to have Bloomberg endorse part of Smith's plan. Earlier Bloomberg had criticized the taxi fee and the viability of Smith's plan.

With the budget out of the way, legislative leaders seemed focused on the MTA issue as they returned from Easter vacation last week. And legislators like Sen. Kevin Parker, who came out earlier in the year against any plan that contains bridge tolls and had a no-rush attitude with regard to the MTA now seem to have been motivated by their constituents' outcry.

Smith and Paterson, however, should be especially motivated to seal the deal. They both deeply need a win. Smith wants to demonstrate an ability to pass controversial legislation despite his slim majority, and Paterson needs to look like a leader to bolster his image and combat his sinking poll numbers. But their apparent desperation to look like leaders on the MTA rescue plan has caused friction between the two and perhaps even hampered the process.

On Friday Paterson strongly criticized Smith's MTA rescue bill and seemed to acknowledge it did not have enough support to pass in the Senate. A call between negotiators representing Paterson, Assembly Speaker Sheldon Silver and Smith reportedly fell apart after Smith revealed he had introduced a bill without Paterson's input. Sources in the Senate griped to reporters that Paterson was hampering the process by not lobbying senators on the issue and not coming out in full support of Smith's plan. This prompted Monday's leaders meeting where the leaders apparently failed to reach agreement.

Also on Monday, the Senate, in a vote along party lines, moved the bill out of the Transportation Committee. Republicans slammed the bill. Even Sen. Martin Dilan, the Democratic committee chair, said he thought the $1 fee on taxi drop-offs was too much.

On Tuesday the Finance Committee passed the bill. Republicans attacked it. Still, a vote seemed set this week.

However, thanks to changes made in committee, which would exempt livery and limousine drivers from the taxi fee and make an audit of the MTA mandatory rather optional, it now appears that the bill cannot legally be voted on until next week. And even then it is unclear whether the bill will have anywhere near enough support to pass. There has been talk that the bill will be amended to make it more appealing to legislators, but so far the changes that have been made in committee have not been game changers. On Tuesday a spokesperson for Paterson said that negotiations are continuing.

Is it Already Too Late?

Pranger said that legislators are playing a dangerous game by letting whatever solution they reach come down to the wire. The MTA has set June 1 as the day fare hikes and service cuts start to go into effect. "The MTA really is moving ahead and the closer we get to June 1 the harder it is to undo this," said Pranger. "I've spoken to MTA representatives about how much time they would need to reverse course, and they would need just about as much time as they did to put it into effect, so they need to know by the end of the month."

Aaron Donovan, an MTA spokesman, confirmed some of Pranger’s concerns. "Every day that we wait it becomes more difficult to undo the actions that were approved by the board," said Donovan. Commuters who buy their tickets in advance for the Metro-North and Long Island railroads will begin to see fare increases in early May, he said. NYC Transit officials say that the process of writing and implementing a fare hikes takes about six to eight weeks. Officials have been working for some time to implement the changes, which would mean fare increases of up to 30 percent, and that process would have to start all over again if the legislature comes up with a more modest fare increase. "It’s not as simple as hitting a button," said Donovan.