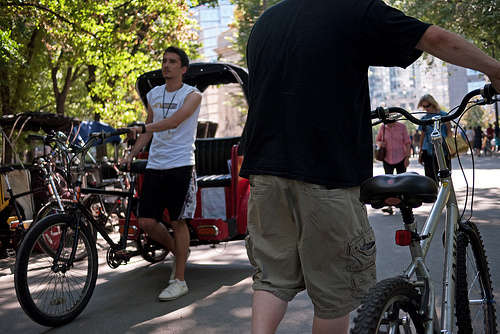 NEW YORK — Too many tourists are being taken for a ride by pedicab drivers charging excessive fees, city officials say.

After one vacationing couple made tabloid headlines for being scammed into paying over $400 for a 12-minute pedicab ride, City Council members introduced a bill aimed at stopping such exorbitant fees. The new bill is on its way to being voted on by the City Council at tomorrow's stated meeting.

While the case of the $400 pedicab ride is extreme, the bill's sponsor, Councilman Dan Garodnick, said today at a committee hearing that the "outrageous fares" are not uncommon throughout Central Park and Times Square, an area he calls "Mid-town's Wild West." Tourists often begin a pedicab ride with the expectation of paying $30 to $40, when at the finish they end up paying anywhere from $90 to $15, he said.

The bill calls for making it impossible for pedicab drivers to stack on any added fees.

Intro. 0597 - 2011 is part of an amendment to a local law to the administrative code of the city of New York and was debated in the Committee on Consumer Affairs. It is designed to eliminate confusing pedicab rates and fees and to simplify what the committee's chair, Garodnick, describes as having become "predatory business practices."

HOW IT WILL AFFECT NEW YORKERS

This bill aims to make it mandatory for pedicab drivers to use a timer during all rides, fastened within clear view of the passengers. It would also require that pedicabs charge a per minute rate only and to post the rate on the side of the pedicab.

Information cards must be supplied to all passengers listing the per minute rate, along with the name and license number of the pedicab driver as well. There will be no more hidden fees, surcharges, taxes, or mandatory gratuity added on to the final cost.

The bill is being sponsored by Garodnick and is backed by the city council committee on consumer affairs, including city Councilman Charles Barron and Councilwoman Julissa Ferreras.

Councilman G. Oliver Koppell said he believes the issue would be better handled under the NYC Taxi and Limousine Commission, as pedicabs are now to be priced the same way regular taxicabs are.

The New York City Pedicab Owners' Association has endorsed the bill, saying it will help the sector to maintain a good reputation.

The Department of Consumer Affairs, which would be responsible for developing a "pedicab information card" that would display basic consumer protection information, has supported the bill.

The bill was approved at today's committee meeting and goes to the full Council hearing tomorrow.