Public funding for transportation goes back further than the eye can see, from building the Erie Canal to construction of the New York City subway and Interstate highways. In each case, the decision to expend public monies was based on pressing public needs for expansion of canal, transit and highway systems and the belief that public investment would pay dividends in economic growth.

New York and New Jersey officials are now faced with deciding whether privately operated ferries should be next in line for public funding. New York Waterway, which currently carries 32,000 passengers a day, primarily from New Jersey to Manhattan, is experiencing acute financial difficulties. The company’s president, Arthur Imperatore, announced this month at a City Council hearing that, “New York Waterway is dying.” The company has closed some routes and is planning to shut down additional routes later this month.

As with the region’s bus, subway, rail and highway systems, proponents of public subsidies argue that ferries provide a vital transportation service and spur economic development, in this case, along the New Jersey waterfront. Without the ferries, as many as 5,000 cars now parked near the New Jersey shore might travel into Manhattan each day, further burdening already congested tunnels and bridges into Manhattan. And ferries provide important redundancy in the transportation system, a fact graphically highlighted on September 11, 2001.

Ironically, NY Waterway, established in 1986, has long been hailed as a model of private entrepreneurship. Imperatore’s father set up the company to provide easy access to Manhattan for his New Jersey residential developments. The company offered not only ferry service but also bus service in Midtown to access West Side ferry terminals.

At first glance, ferry service might seem to be an ideal candidate for private operation. Ferries serve a niche market of customers who lack ready access to New Jersey’s bus and rail networks or who prefer the ambiance of waterborne transportation to the crush of PATH trains. Ferry riders are generally well-paid professionals. And by increasing access to Manhattan jobs, the ferries make private residential developments on the Jersey side of the Hudson River more attractive and valuable.

NY Waterway’s current troubles were spawned by decisions intended to build on its own success. Ferry ridership doubled after the 9/11 attacks, which closed the PATH system’s World Trade Center station. Both the company and public agencies leapt at opportunities to increase ferry services by adding routes and revamping ferry terminals. But after NY Waterway took on $33 million in debt to buy new boats, PATH reopened ahead of schedule, Manhattan job losses produced a drop in the number of commuters, ridership fell off after the Hudson River froze for two weeks last winter, fuel prices doubled and the company spent $4 million in legal fees over a dispute with the federal government over billing practices for post-9/11 service.

Some officials are now calling on government agencies to keep the service running. Hudson County (NJ) officials formulated a plan to buy the company and operate it in concert with Hoboken and Weehawken. But state officials last week nixed that plan.

Some Hudson County and New York City Council officials are calling on the City of New York and the Port Authority of New York and New Jersey to step in. New York City Councilmember David Yassky urged the city to waive docking fees that total $1.5 million a year. Council members also urged the Port Authority to authorize subsidies amounting to $16.6 million a year. Tom Fox of New York Water Taxi, a competitor to NY Waterway which is putting together a plan with three other ferry and sightseeing cruise companies to take over NY Waterway routes, said subsidies are needed to compete with the heavily subsidized PATH lines. 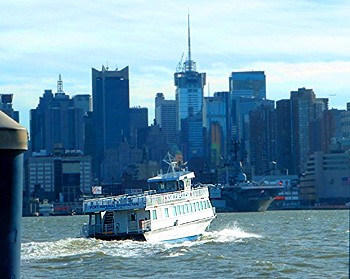 The City Transportation Department responded that the Council would need to offset the revenue loss if landing fees were waived. The Port Authority was noncommittal, calling for a “multiagency review of ferry service throughout the region.”

The Port Authority also pointed out that it has invested, or plans to invest, more than $100 million in ferry terminals, roadway upgrades and other infrastructure costs. Thus, the issue is not whether privately operated ferries should receive public subsidies, but what form of subsidies, and how much, and who will pay.

The most fundamental question is whether public agencies should subsidize specific ferry routes to keep them running. On the one hand, equitable treatment of commuters suggest that the public should subsidize ferry travelers. After all, the PATH system and NYC bus system only recover 41 percent of their operating expenses and even the NYC subway, which leads all transit systems in the U.S. in farebox cost recovery, only pays 67 percent of its expenses from fares, according to federal data (In PDF Format) summarized in a Brookings Institution study.

On the other hand, would political considerations overwhelm business decisions about which routes to keep, which to close and which to expand, leading to an inefficient and heavily subsidized ferry network that drains the public till?

The reticence of the Port Authority and NYC Transportation Department to agree to operating subsidies is well founded. The Port Authority has increased its funding for PATH while keeping PATH fares relatively low. Under pressure from Staten Island voters and elected officials, the Giuliani Administration abolished the Staten Island ferry fare. The average trip on the S.I. ferry costs $2.95, all of which is paid by the city, none by riders. The City Council recently adopted a bill to increase late night service and some rush hour service at an additional cost of $5 million a year.

The test for public officials is now to find a way to support continued ferry service where it provides substantial public benefits while maintaining the market-driven sensitivities to both changing demand and opportunities for service that are the hallmark of private companies. This is a difficult task, made more so in the current crisis-driven environment, as NY Waterway totters on the brink of closure.