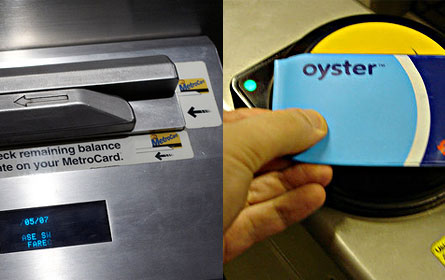 The Metropolitan Transportation Authority needs to find at least $15 billion to fund its next capital plan, debt service on previously issued bonds continues to climb exponentially, and pension costs are skyrocketing. More than 8 million people depend on MTA services each day, and state legislators seem to prefer charging the authority with mismanagement and malfeasance to really grappling with its serious fiscal problems. It couldn’t have said all of that in the job posting that Jay Walder recently answered, but a man of his experience no doubt knew what he was getting into.

Walder, Gov. David Paterson's pick for MTA chairman, has a resume tailor-made for the post. He’s a native New Yorker, hailing from the Rockaways, with childhood memories of riding the el. He studied at the Kennedy School of Government at Harvard, where he later taught. Through the 1980s and 1990s, he climbed his way up the ladder at the MTA, from financial analyst to chief financial officer, before heading to London’s transportation agency, where, under former MTA chairman Bob Kiley, he worked on congestion pricing, a large expansion of the bus system, the introduction of a high-tech no-swipe fare-card called the "oystercard" and the agency’s first issuance of Municipal Eurobonds.

Presuming that Walder is confirmed by the state legislature, a process that some recalcitrant elected officials imply may be more like a late night G-train ride than an express trip, he’ll be filling two vacancies. That alone gives some indication of the post’s instability.

Walder’s job combines the role of chairman, previously held by Dale Hemmerdinger, with that of chief executive officer, a position formerly filled by Elliot "Lee" Sander. It was created as part of the MTA bailout legislation passed this spring, which also mandated an end to Hemmerdinger’s tenure. Although the new post comes with a six-year term intended to shield appointees from day-to-day political worries and short-term concerns, the experiences of his predecessors suggests something very different.

Sander’s resignation, which seems to have come reluctantly -- in a departing interview, he called it "my dream job" and expressed "a feeling of disappointment" -- came a day after state lawmakers approved the very publicly debated MTA bailout and just hours after the governor promised new leadership at the top of the agency. Although it’s common for governors to choose top MTA players -- both Hemmerdinger and Sander were appointed by former Gov. Eliot Spitzer -- the two resignations and their replacement came so long after Paterson became governor and so close on the heels of the funding debacle that it's hard not to read them as an indicator of the political perils faced by the authority's top officials. Walder, then, if appointed, might truly serve at the pleasure of the governor.

The problem with such an arrangement, especially at a time when gubernatorial pain is more likely than pleasure, is that it can leave the chairman facing the choice of keeping his job or making the unpopular decisions that are essential to the betterment of the authority. Many of these decisions, like instituting bridge tolls, fare hikes, new issues of bonds, new taxes or other funding mechanisms, have an impact on pocketbooks, polls and Election Day results. All the evidence -- despite public promises to the contrary -- suggests that Paterson or his successor could all but send Walder packing if the going gets tough.

As if that weren’t trouble enough, the MTA-funding crisis also helped empower a group of state senators dubbed by readers of the urban planning website streetsblog.org as the "Fare Hike Four" and now more widely known as the leaders of a coup that stalled the state capital for weeks this summer and solidified Albany’s role as the poster child for dysfunctional government.

These renegade senators -- Pedro Espada Jr. and Hiram Monserrate, as well as Carl Kruger and Ruben Diaz Sr. -- smelled their power in the East River bridge toll debate, tasted it in overthrowing Malcolm Smith and the Senate leadership, and by all logic, will revel in it at the next critical opportunity. That will likely come on Walder’s watch.

Despite this spring’s bailout, the authority is in rough financial shape. It is short at least $15 billion for its next capital plan, has very recently passed the hat and tapped new resources, and still is paying off the debt incurred during the massive borrowing that took place under former Gov. George Pataki. It will almost certainly need to establish new sources of financing soon.

In the minds of most experts, the biggest challenge facing the new MNTA board chairman is figuring out how to close the budget gap without reigniting a "debt bomb" like the recently exploded one lit by Pataki-era bonds. One possible solution would be for the state to issue bonds that would benefit the MTA, as opposed to the MTA issuing its own. The debt service would have less impact on state’s balance sheets than on the MTA's, but issuing such bonds requires approval by the state government.

The state legislature, including the Fare Hike Four, is responsible for the bond sales, levying taxes and just about every other likely MTA revenue stream. Espada and his colleagues have made it abundantly clear that they believe the MTA’s budget troubles have much more to do with mismanagement and allegedly dodgy books than the economic downturn. They also have made it apparent that creative revenue generators, like the congestion-pricing program that Walder used to help balance the budget in London and East River Bridge tolls, are a non-starter.

The next MTA chairman will also have a new Transport Workers Union contract to negotiate in the first few months of his term. As of last year, personal service costs, including salaries, overtime, health insurance, pension contributions and fringe benefits consumed two thirds of the MTA's $10.8 billion annual operating budget, according to Comptroller Thomas DiNapoli. More than $861 million went to pension contributions alone in 2008 -- a $552 million increase over 2003 levels.

One of the simplest and most effective ways to lower these numbers is through smart negotiations with the Transport Workers Union. Unfortunately, Walder may have a tough time with that too.

Soon after his appointment, the Daily News’s Pete Donahue wrote, "Bus and subway workers could be in for a bumpy ride if former London transit chief Jay Walder becomes MTA chairman, a London labor leader warned Tuesday." The story went on to paint a picture of an "evasive" character only concerned with the bottom line.

For a chairman of an organization that employs nearly 70,000 mostly unionized people, that kind of publicity could prompt the union, already one of the city's more confrontational, to adopt a hard-line approach.

Of course, Walder’s greatest challenge may come from the people he has been hired to serve -- the people who will ride his subways, trains and buses. The MTA has an image that only a public relations consultant on retainer could love. Long-disproved rumors about two sets of books and rampant waste circulate widely, fueled by legislators and the press. That these are untrue has no bearing. That they're talked about is everything. If Walder wants to set the MTA straight, he'll need to figure out a way to have people associate the authority with progress, professionalism or something else positive.

Walder recognizes as much. In the news conference following his appointment, he said, "Any long-term solution to funding requires us as the MTA to show people we are using funding as efficiently and effectively as possible." That is another way of saying, we need to win, or at least not lose, the media war.

In his relatively short tenure, Sander tried. He installed managers on each line, publicly cut hundreds of administrative positions and even got in front of the cameras on occasion. Unfortunately, all of that proved insufficient when the MTA ran into fiscal chaos and fare hikes, and service cuts became the meat and potatoes of every story.

Perhaps Walder will have better luck, both financially and practically. His technical savvy won hearts and minds in London -- the "oystercard" grabbed headlines around the world -- and congestion pricing naysayers were neutralized by reams of evidence and analysis. In New York, though, particularly in these politically treacherous and tight-fisted times, the opportunity for such victories may prove elusive.