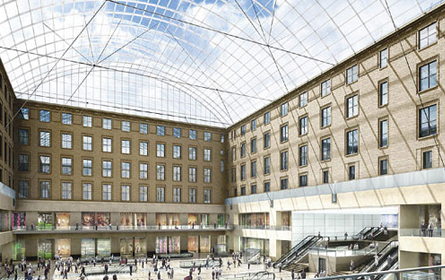 Religious rhetoric often seems to find its way into discussions of Moynihan Station, which makes a good deal of sense if one subscribes to the notion that, in the historical schema of civic architecture, grand cathedrals were replaced by train terminals and post offices. Moynihan Station involves both: Its most current iteration calls for the construction of a railroad station inside of the eastern half of Farley Post Office, which would then be known as Moynihan Station.

Speaking of the project that would come to bear his name, the late U.S. Sen. Daniel Patrick Moynihan intoned at a 2002 press conference: "In the old time, you arrived at Pennsylvania Station at the train platform. You went up the stairs to heaven. Make that Manhattan. And we shall have it again. Praise all."

The old time, of course, referred to the era of old Pennsylvania Station: the Beaux-Arts masterpiece designed by McKim, Meade & White in 1910, where Moynihan sold newspapers and shined shoes as a boy fresh to the city from Tulsa, Okla. It was replaced by the new Penn Station in the mid 1960s, an act that the critic Lewis Mumford then characterized as "irresponsible public vandalism," and is now seen as a catalyst for the architectural preservation movement in the U.S. The two stations are so drastically different that the Yale architecture professor Vincent Scully once compared the old to the new by saying, "One entered the city like a god; one scuttles in now like a rat."

A Return to Grandeur 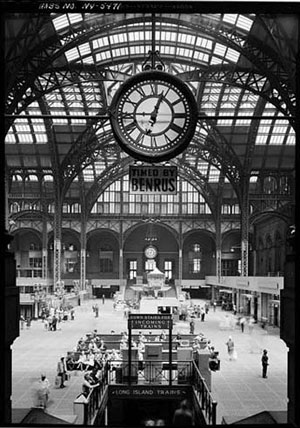 Moynihan's plan to restore Penn Station's greatness -- which has been stalled so long that it's hard not to see the whole thing as some sort of civic penance -- has always aimed to turn the Farley Post Office across Eighth Avenue -- a McKim, Meade, and White Beaux-Arts building designed to match its former neighbor -- into a grand railroad station befitting New York. Over the years, the proposal has called for a variety of anchor tenants, including Amtrak, New Jersey Transit and the Long Island Railroad, and a litany of additional components such as a relocated Madison Square Garden, 850,000 square feet of commercial space, 5.5 million square feet of towering office space, and much more. Despite all of the permutations, state funds, private money, a few environmental impact statements, and even an engraved marble cornerstone that has gone missing, the project never managed to get off (or into) the ground.

Earlier this month, Gov. David Paterson and Sen. Chuck Schumer started up the Moynihan chatter once again. After six months of negotiations with Amtrak, parties reached a preliminary agreement for the company to relocate its operations to the Farley Post Office, if a train station were to be built there. That move improved, but by no means guaranteed the prospects for federal stimulus funds for the construction needed to turn the post office into Moynihan Station.

The long holdup has nothing to do with a lack of support. Since Moynihan started to champion Amtrak's suggestion that the Farley Post Office serve as New York City's new train station in 1993, civic groups and elected officials have crowded on board as though the plan was Noah's ark. At times, perhaps, all this enthusiasm has caused problems. When Assembly Speaker Sheldon Silver shot down one of the biggest iterations of the project, known as Plan B, in 2006, it was not because he was opposed to the development, but because he thought one of the cooks in the kitchen, the Empire State Development Corp., wasn't doing its job well.

One Step at a Time

The real trouble, though, has been getting all of the project's financial ducks in a row, a dilemma that this latest try seems eager to best with a piecemeal funding strategy. The New York Observer reported: "One official involved with the project called this approach moving beyond 'the Big Bang theory,' the method of executing everything at once, which has failed so many times before."

The current iteration of the Moynihan station project is expected to cost between $1.1 billion and $1.5 billion. There is already more than $200 million in federal funding earmarked for the project and on September 15, the state applied for nearly $100 million for necessary below-ground work through a stimulus-bill backed program called Transportation Investment Generating Economic Recovery or TIGER, a discretionary grant directly overseen by the Obama administration.

In addition, "[State] officials are planning a second application for a to-be-determined amount of money from the $8 billion set aside in the stimulus for high-speed rail projects," the Observer reported. It cited a preliminary application that the Paterson administration put forward earlier this year seeking nearly $400 million of those high-speed rail dollars.

Of course, given the current economic situation and the money's relatively well-publicized availability, there is stiff competition between state transportation departments all around the country for both the TIGER and high-speed rail funds.

At this point, it seems like if any those dollars make it to New York, it will be on a wing and a prayer, which, given all that has been written about Moynihan Station, is perhaps fitting.