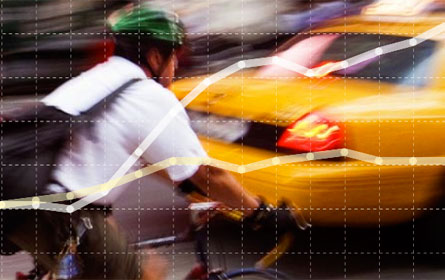 This is one in a series, to run between now and Election Day, examining Mayor Michael Bloomberg's record in key areas. For more on the mayor's eight years see:

Governing a City of Newcomers: Always a supporter of immigrants, Michael Bloomberg during the election season, has announced more initiatives to aid the foreign born -- and advocates will be watching to make sure these go beyond campaign promises.

Although Mayor Michael Bloomberg's reputation as a bona fide straphanger suffered a bit after the New York Times revealed that two Chevrolet Suburbans regularly ferry His Honor from his home on 79th Street to 59th Street where he catches the Lexington Avenue express to City Hall, it would be unfair to paint Bloomberg as nothing more than a grandstanding populist who only swipes his MetroCard for the cameras.

After eight years in office, it is undeniable that the mayor wants to tackle traffic and improve biking, walking, and public transportation, even if it means ruffling feathers along the way. If Bloomberg's tenure were to end in November, his impact on the city's pedestrian spaces and bicycle infrastructure would surely be on his list of legacies.

That said, he lost the fight for congestion pricing -- easily his most publicized transportation initiative -- and the financial forecast for the Metropolitan Transportation Authority, which serves 14.6 million people with 2.6 billion trips around the region each year, is grim to bleak, at least in part because of funding choices made by the mayor.

Bloomberg by the Numbers

The most comprehensive analysis of the administration's transportation record is, like so many other comprehensive analyses offered by the administration, an internally authored document. Released in December, the Department of Transportation's Sustainable Streets Index tracks transportation trends over the past decade. It's a well-designed, fact-packed, reader-friendly report that unsurprisingly depicts the agency that authored it quite favorably.

That is not to say the department doesn't deserve to toot its own horn. Since Janette Sadik Khan took over the department in April 2007, it has converted acres of street space to pedestrian plazas, installed hundreds of miles of bike lanes, piloted a new bus service that is significantly speeding commutes in the Bronx, launched the wildly popular Summer Streets initiative, and made the city safer for pedestrians and cyclists.

The index includes a slew of figures detailing these facts, but the most staggering, and the one that casts Bloomberg in the best light, is that transit ridership increased by nine percent between 2003 and 2007, while citywide traffic volumes remain the same. As the report points out: "These years mark the first time since World War II that the city experienced a period of entirely transit-centered growth, where non-auto modes absorbed all growth in travel in New York City."

Bloomberg has always fancied the English. Back in his private-sector days, his media empire's second largest office was in London, and one of his first transportation-related rows as a public figure came over toll for the East River bridges, an attempt to emulate the then brand-new congestion charge that revolutionized transportation in London. The phrase "congestion pricing" even made its way into a 2002 proposed budget, but after it proved poisonous in public opinion polls, the initiative was dropped, at least for a few years.

In 2007, congestion pricing came crashing back onto the scene, stealing the show from all 126 other points in Bloomberg's omnibus sustainability initiative PlaNYC. For months advocates and newspapers opined. Depending on whom you asked, the proposal was either a regressive tax on the working class or the city's salvation. In the end, the plan died in Albany, as did an attempt, launched by a blue ribbon panel earlier this year, to charge drivers to cross the East River bridges.

The pieces of New York City's transportation pie that Bloomberg directly controls have been handled very well, according to most advocates and urban planners. His transportation department has garnered more positive media attention than any in recent memory and truly revolutionary transformations are underway on streets throughout the five boroughs. On the other hand, the single most significant actor in our urban transportation drama, the Metropolitan Transportation Authority, has had no shortage of trouble in the past eight years.

Although the authority is far from under the mayor's control (his appointees fill only four of the board's 17 seats), its successes and failures are intensely intertwined with the city's well-being and Bloomberg's transportation track record.

The 2005 transit strike stalled the city during one of the busiest shopping weeks of the year. It was only the third strike ever against the MTA, and as such it is imprinted in the minds of millions of straphangers with heavy ink. A New York 1 poll taken during the transit strike showed mixed opinions about Bloomberg's actions: Fifty-one percent said his handling of the situation was not so good or poor, while 45 percent said it was great or good.

The authority's financial standing did see some good years under Bloomberg. The real estate boom helped the MTA unload large parcels of land for big bucks. That balanced the books for a bit, but when the bubble burst and dedicated tax revenues dropped precipitously, the authority was back in the red.

During those long-gone good years, Bloomberg cut the city's contribution to the MTA. It is now about $60 million a year, or just 1 percent of the authority's capital budget. Previously, the city's contribution equaled about 10 percent of the MTA's capital budget. The cut has inspired some advocates, like John Petro of the Drum Major Institute, to claim that Bloomberg is "shortchanging mass transit" and others like Veronica Vanterpool of the Tri-State Transportation Campaign to call for the city to increase its aid to the MTA.

Certainly, Bloomberg has campaigned as though the decrease hadn't happened. In August he released Moving NYC, a populist, voter-friendly, MTA-dependant transit platform that suggests a slew of new proposals, like free cross-town buses, that are either inspired ideas or empty promises.

If the voters re-elect Bloomberg in November, we'll have four more years to find out if he is really the MetroCard Mayor or merely another politician in a big black SUV.