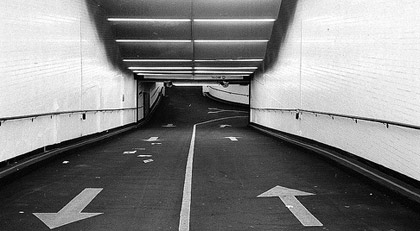 The Bloomberg administration has been on a traffic-taming tear since PlaNYC was announced in April 2007, but many of those efforts could be for naught, according to a new study by Transportation Alternatives.

"Suburbanizing the City: How New York Parking Requirements Lead to More Driving" argues that New York City zoning rules will bring 170,000 additional cars to city streets by 2030. These rules require that developers build parking lots along with new buildings-regardless of their proximity to transit or the anticipated demand for the spaces. As the new parking lots make car ownership easier by decreasing the time and financial costs of owning a car, they encourage more New Yorkers to drive.

Of course, both Mayor Michael Bloomberg's PlaNYC and the parking requirements that allegedly undermine many of PlaNYC's goals stem from a root concern: the influx of residents and cars to New York City. So what can be done to make room for the arrivals while keeping the city sustainable?

Bloomberg introduced PlaNYC and its most contentious component, congestion pricing, by asserting that one million more residents would live in New York City by 2030. To avoid near-constant gridlock, the environmental impact of traffic jams and the $13 billion price tag stuck to all the delays, the city had to charge people for driving and adopt other measures that reduce the amount of vehicle miles traveled.

Although congestion pricing did not make it through the State Assembly last spring, the mayor and the city Department of Transportation have continued to enact measures that discourage driving in hopes of taming traffic.

Broadway was put on a "road diet" earlier this summer when the city replaced two lanes for cars and trucks with a pedestrian island and a traffic-protected bike lane between 42nd Street and 35th Street. The city also narrowed and simplified the Madison Square Park intersection at Fifth Avenue and added colored bike lanes and pedestrian plazas that removed space for cars.

Bloomberg has also looked to parking reform as a traffic reduction measure. Last January he announced a plan to limit free parking permits issued to city workers -- known as placards -- as part of "efforts to reduce traffic congestion, decrease the city's carbon footprint, encourage the use of public transportation and reduce the demand for curbside parking in connection with city business."

"A reduction in placards isn't just about opening up curbside parking spaces," said Transportation Commissioner Janette Sadik-Khan. "It also speaks to the city's efforts to be smarter about the allocation of our transportation resources and to a transportation policy that aims for a greener, greater and less congested New York."

It was with this sentiment in mind that the Transportation Department introduced its "Sustainable Streets" strategic plan, which calls for initiating "citywide parking policies to help reduce cruising for parking and congestion." The agency is looking to "exploring new curbside management'' that could "even cut back on congestion by reducing the need to circle for a parking spot."

With all this afoot, how could the city miss the mark so badly in the eyes of the authors of the Transportation Alternatives report? Simple: When planning for new developments - an estimated 265,000 additional dwelling units are on their way by 2030 - the city requires too much off-street parking.

If You Build It, They Will Come

Broadway's "road-diet" and the reduction in parking placards make it easier for pedestrians and cyclists by creating and preserving dedicated space for them. The policies also discourage car use by taking away traffic lanes and generating longer wait times for drivers. Although it might seem counterintuitive to reduce traffic by decreasing driving and parking space for cars, there is a time-tested and well-documented logic behind it.

When parking and road space is free or cheap and when other transportation is available, as it is in most neighborhoods in New York City, two additional factors affect whether or not people choose to drive: the amount of space available for driving and parking, and the user's available time. Once space becomes limited, the amount of time it takes to drive and park increases until it reduces the demand for driving. Adding traffic lanes or parking spaces creates more capacity for vehicles and so reduces the amount of time it takes to drive. This encourages more car use until the roads once again become packed.

In other words, people will only wait in line for a free ice cream cone for so long. After a while, the time you waste waiting in line is more valuable than the free ice cream and so you end up skipping out on a treat. If another person starts passing out free ice cream, the line won't be so bad but eventually, more people will get in it and soon things will be just as bad as they were to begin with.

So, when the city zoning rules set minimum requirements for off-street parking requirement, say .39 parking spots for every new unit, which is the case in the Williamsburg-Greenpoint developments, they create more space for cars and thus take away one of the limiting factors on car ownership. According to the study, residents of new development are at least 40 percent to 50 percent more likely to own automobiles than today's New Yorkers, about 45 percent of whom own cars, according to census data.

What's more, "Under the current zoning regulations, mandating parking at new residential developments will add over one billion annual vehicle miles traveled. This is 40 percent to 50 percent more than if the city were to maintain its existing rate." All of that additional auto use would add 431,000 metric tons of carbon dioxide by 2030, a figure that significantly overshadows the 351,000 tons of carbon dioxide that the green taxi and fuel-efficient black car initiatives will take away by the same year.

Still more troubling, when parking space is included in the cost of developing housing and/or in the cost of renting or buying a home, the price of housing increases and the cost of car ownership decreases. That affects not just people who own cars, but those who wish to live without them. The authors of "Suburbanizing the City" write that in bundling parking with housing, "both markets are distorted and likely result in both lower rates of homeownership and higher rates of car ownership than would be seen if the uses and costs were unbundled."

Getting Parking on Par with PlaNYC

What explains the disconnect between off-street parking regulations and the goals of PlaNYC? Rachel Weinberger, a professor of urban planning at the University of Pennsylvania and one of the study's authors, cites a lack of information available to policy makers in the Bloomberg administration.

"Public transit is in the hands of the Metropolitan Transportation Authority, city streets are under the purview of the transportation department, and off-street parking information and regulation is controlled by the Department of City Planning," she said in a phone interview. "The information that one needs isn't integrated anywhere."

"Although the city is becoming increasingly aware of the effects of on-street parking on traffic and congestion, they seem to be ignoring the possibility that off-street parking can generate car trips," said Lindsey Lusher of Transportation Alternatives.

In a section of the report titled "What the City Doesn't Know," the authors write, "In developing the research reported in this study ... every possible data source on residential off-street parking was consulted .... Unfortunately, we found these data woefully inadequate for the task of developing citywide policy on parking."

They go on to discuss "grave inaccuracies and omissions" in the available records such as erroneous or unverifiable garage locations and thousands of additional square-feet dedicated to parking that were not unreported. The report concludes: "We were also unable to uncover any analysis or methodology that would lead to parking policy decisions."

A Department of City Planning spokesperson responded to a request for comment by email: "In order to minimize car use and create a more sustainable city, we are encouraging growth near mass transit while directing it away from auto dependent areas. DCP and DOT are also studying mechanisms for reducing the number of cars on city streets to achieve the mayor's PlaNYC goals. We are reviewing off street parking regulations, but most areas south of 96th Street in Manhattan do not require any parking, and in other neighborhoods, lack of parking is a frequent community complaint."

"Suburbanizing the Streets" paints a grim picture of the relationship between land use planning and transportation planning in the city today. Certainly there is plenty of evidence to suggest that the Bloomberg administration is serious about taming traffic and its attendant ills, and it is certainly impressive how much officials have accomplished in so short a time. This report, however, suggests that there is still a great deal more work to do.

With millions coming, there is no time like the present.