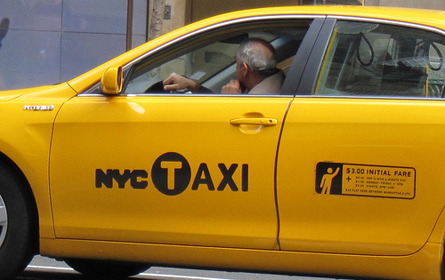 Mohammad Chowdhury bears the scars of his profession. A long scar stretches across his throat, a memento of a five-inch knife wound he received during a March 28 attack. It took 18 stitches to put him back together. Chowdhury is not a police officer, a solider or emergency responder. He drives a cab.

At 4:30 a.m. as Chowdhury, off duty, headed home at the end of his shift, two women asked him to drive them to the Bronx. One of the women started to urinate in the cab. Chowdhury pulled over and demanded that she use a restroom. The woman opened the door and urinated on the sidewalk, and Chowdhury repeated his request that she use a nearby bathroom. That is when the woman grabbed him by the head and started assaulting him, eventually using a utility knife to slash his throat. Chowdhury was rescued by emergency medical workers who saw the attack.

The general public might not think driving a cab is particularly dangerous, but cabbies say that their profession is one of the most hazardous in the country. The New York City Police Department estimates that around 100 cabbies have been robbed this year but the New York City Taxi Workers Alliancesays that a large number of attacks go unreported by cabbies.

A 2002 report by the U.S. Department of Labor found that drivers who work 12-hour shifts are 60 percent more likely to be killed on the job than most workers.

In an effort to help change that, State Sen. Eric Adams and Assemblyman Rory Lancman have proposed the Taxi Driver Protection Act, which would make it a class D felony in New York State to assault a cab driver, even if only minor injuries are incurred, and would mandate that signs be placed in every cab warning that "Assaulting a Taxi Driver is a Felony Punishable by Up to Seven Years in Prison."

The new law might not punish Chowdhury's attackers anymore than they normally would be because of the brutal nature of their assault but there is hope that having a stiffer law on the books and the warning sign would deter future attacks. Taxi driving is routinely ranked in the 15 most dangerous jobs in America. It was estimated in 2008 that 19.3 cabbies died for every 100,000 drivers. They carry cash, they travel all over the city, and their backs are constantly to the people they are serving.

While attracting support from drivers and some officials, the measure is by no means assured of passage. The bill enjoys considerable support in the Assembly, where it has multiple cosponsors, but so far the Senate bill has no cosponsors.

The head of the city Taxi and Limousine Commission, David Yassky endorses the legislation. "Taxi and for-hire vehicle drivers provide an important public service to our city, and we need to maximize their safety. The Taxi Driver Protection Act will send a strong and clear message that violence of any kind against drivers will not and cannot be tolerated," said Yassky.

States including California and Illinois have stiff felony penalties for assaulting drivers, and other states employ warning signs.

Those expressing reservations about the bill question whether the state should distinguish between the job of the victim in setting penalties.

"There is always a concern about legislating for each individual profession in the state. We don't want a bill for each one," said Assembly Minority Leader Brian Kolb, who said he is not sure whether he will support the bill. "Having said that, they have a bill for transit workers, and taxi workers are certainly in more danger than most because of the situation they are in -- with their backs to riders. It is dangerous, and in general we have to do something about it."

But that something is not necessarily voting for the Taxi Worker Protection Act. Kolb said he needs to reconcile his concerns about the legislation before deciding how he will vote. Senate Republicans have similar concerns and said they would need more time to consider the legislation.

In 2008, as Kolb mentioned, the legislature passed a law that makes it a class D felony to assault transit workers, including bus drivers, station agents and traffic enforcement agents.

Lancman said that law makes Kolb's concerns moot. "The debate has been resolved. The only question that remains is if taxi workers fit into the class of workers who are in more danger than most others. And I think it is pretty clear they are. This is really a no-brainer," Lancman said

"There are other people on the other side of the aisle that say we shouldn’t give stricter penalties for attacking people of one profession," said Adams, "but we already have the precedent so there is no argument.”

"You can't ever predict what is going to happen in Albany, but we are pushing this as hard as we can," said Adams.

Assembly Speaker Sheldon Silver's office would only comment to say that the bill is in the "committee process." A spokesman for the Senate Democrats said he was not familiar with the bill

Mohammed Chowdhurry was by no means the only cabbie at Tuesday’s rally with scars and stories to tell.

Nearly 100 other cab drivers took the day off from work to drive to Albany to lobby on their own behalf. They circled the Capitol in a motorcade, honking their horns. And then they took to the capital to tell their stories.

Mamnun Ul Haq told the crowd that, in 2005 he drove himself to get help after a passenger stabbed him in the back with a 10-inch hunting knife. The knife grazed his lungs and came near to his spine. He figured he would die on the operating table. He survived but spent years working his job afraid that he would be attacked again. He has recently taken up a different trade.

The stories go on and on.

Legislators and drivers admit that the legislation will not stop all violence against taxi drivers, but they hope it will go a long way to deterring at least some of it.

"We are impatient," said Lancman. "This is not some kind of esoteric debate. This is going to change people's lives. We feel a real sense of urgency to get this passed because we are sure it will save someone's life."