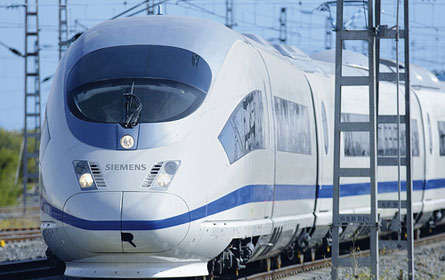 Photo by Worklife Siemens
Will fast trains such as Spain's Velaro, be coming to New York?

Imagine making the trip from New York City to Albany by train in under an hour. For politicians, lobbyists, reporters and business people, it would be a godsend. Currently the trip takes two-and-a-half hours.

And there are grander reasons to hope cities across the state will soon be connected by high speed rail according to Sen. Malcolm Smith. First, he said, it will create jobs, some 200,000 of them by Smith's estimate, "from construction to finance and other things." Second he said, it will improve the environment. And lastly, he said, "This will bring the state together. It will make the concept that we have been talking about of one New York a reality. This will be one New York, for real."

To jump start this process Smith plans to introduce legislation as early as Friday to create a committee under the state Department of Transportation to recommend ways to fund high speed rail in New York. The committee would also determine the proper kind of entity to oversee high speed rail and possibly issue bonds to fund it.

Gov. David Paterson has his own bill that would accomplish the same thing.

Smith's idea is not entirely new. Creating a high speed rail system across New York has been on the agenda for decades without getting anywhere. What’s put the project back on the agenda in Albany is the Obama administration’s offer of an incentive to kick start the development of speedier train service throughout the country. Earlier this year, the administration offered $8 billion in grants to states that want to update their rail systems.

When the grants were handed out, however, New York wound up getting only $151 million of the $4 billion it had applied for. California, a state with a well-crafted high speed rail plan, received over $2 billion; Florida and Illinois will receive around $1 billion, Wisconsin $822 million, Washington $590 million.

Although New York lacks the sort of comprehensive plan California has developed, officials here say New York is taking incremental steps toward initiating its plan. Legislators including Smith and U.S. Rep. Louise Slaughter say they expect the state to apply for more federal money. They will have a chance to do that, as $2.5 billion in federal rail funding will be up for grabs this summer during another round of funding. Applications are due this summer.

If $151 million doesn’t sound that paltry, a lot more is needed to move Smith’s vision toward reality: $90 million of the funds New York has been awarded will go just to build a second track from Rensselaer to Schenectady. The state is expected to spend $58 million to build an 11-mile high speed test strip in upstate New York.

Why was New York shorted during the first round of federal funding? Many rail experts say New York did not present a plan that met the terms of the available grants, didn't have a single agency taking charge of the project and lacked an agreement with CSX, the company that owns the rails along which the state would like to build its high speed system.

"There were a couple of conflicting factors," said Yoav Hagler, an associate planner with the Regional Plan Association. "They didn't have an environmental impact statement and the timelines didn't work."

A few weeks ago, New York and CSX came a notch closer to removing one of those impediments, as they agreed to allow the state to do an environmental impact study on running another line along the CSX routes. CSX has said in the past that adding a passenger line would be unsafe.

High speed rail would initially run somewhere around 110 mph. Eventually as the system improved, the speeds would increase. The goal would be to create a high speed corridor running from Buffalo to New York City. The fast trains would eventually run through the northeast corridor, making train travel between major northeastern cities much faster, cutting the trips from New York to Boston and Washington by hours.

How to Get Federal Funds

On Monday, over 200 people gathered in Albany for a high speed rail summit to discuss ways to fund the project and how it will help business in the state.

After the summit, Smith said mimicking California could help get the state more federal funding. That state has a complete plan as well as a separate entity that controls its high speed rail project. "I would like to follow the California model very closely," said Smith, adding, "At the summit we were talking to representatives from the Obama administration about what we need, if we are on track. There was no 'yes' or 'no,' but if we are doing the right things ... we do need a separate entity to take on this massive endeavor."

Bruce Becker of the Empire State Passenger Association agrees. "We support an independent board to oversee high speed rail. Nothing against the Department of Transportation, but they have other interests, and thruways are their main concern," he said.

Dennis Mullen, chairman of the Empire State Development Corp., said he thought a single entity overseeing the project could only help a massive undertaking such as creating a high speed rail system in New York.

Other funding ideas are also on the table. Smith said that a delegate from China who was visiting the Capitol this week told him that his country is interested in funding New York's high speed rail projects. He also thinks the possible authority which could be created by his bill could issue bonds to fund the trains.

Certainly, the project would require large amounts of additional funding. As of now, Paterson's budget contains only about $50 million in funding for all rail projects â€“- not just high speed -- to be stretched over the next two years.

At Monday’s summit, Mullen talked about how the Empire State Development Corp. could help businesses tap into the excitement high speed rail will generate. He noted that a number of employers around the state manufacture rail equipment. One company with a New York presence, Bombardier, has shrunk from 1,000 to 200 employees over the last decade. Mullen said he thinks that workforce could grow again if New York and the rest of the country get on the high speed bandwagon.

"I'm very optimistic," said Hagler about the prospects of developing high speed rail in New York and the Northeast Corridor. "We are certainly in a better place than we were two years ago. States are working together now."

If New York and surrounding states can establish a high speed corridor Hagler thinks the New York economy would benefit, as would the crowded transit system. "The New York region is the bottleneck in the system. Any plan that improves the rail system or installs high speed rail is going to benefit New York. Being able to reach Washington in an hour and a half is certainly going to benefit New York's downtown business district," he said.

A recent study by the U.S. Conference of Mayors backs Hagler up. The report states that high speed rail throughout the country could create 150,000 new jobs and $19 billion in new businesses by 2035. The report details how upstate regions could be sucked into New York's economic sphere thanks to fast travel times, with commerce spreading at faster rates.

The Long Road Ahead

While the northeast holds the greatest potential for high speed rail in the U.S., Oliver Hauck, CEO of Siemans AG, told the New York Times that the Northeast Corridor is the high speed route furthest from actually being built.

Politicians repeat their mantra that the progress toward high speed rail in New York is incremental. Existing rail lines need to be improved, studies need to be conducted, and the project needs funding. "Coming from the private sector into the public sector, I think we do a bad job of managing expectations," said Mullen. But, he added, "It's good that we have to follow the processes required by constituents. We have these processes for a reason."

Becker agrees, "We support incremental steps. Perhaps in scope we have to start small, but we can't wait for the first groundbreaking in the projects to signal to New Yorkers that the process has begun after decades of study and inaction."

Others, though, are concerned that New York is more concerned with getting federal money to maintain its existing rail structure than actually planning for high speed rail.

"We should be deliberate," said Hagler. "But I disagree with some folks who want there to be incremental steps but say we can't move ahead with high speed rail plans simultaneously. If we want to meet the demands of 2040 and 2050 we need to start planning now."