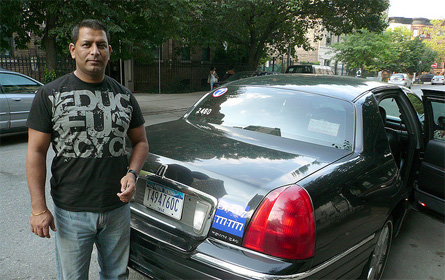 Photo by mandiberg
Currently so-called black cabs or gypsy cabs cannot pick up passengers who hail them on the street. A proposal by Mayor Michael Bloomberg seeks to change that.

Traveling in the back of elusive black cabs in the outer boroughs could become a lot more legitimate.

In his State of the City speech on Staten Island today, Mayor Michael Bloomberg is expected to call for a new class of black cab, better known as livery or gypsy cabs, which will be allowed to pick up passengers hailing on the street in the outer boroughs for the first time. In exchange, Bloomberg will require these livery cabs to have meters, GPS systems and a uniform color or marking, according to a memo on the proposal provided by the Taxi and Limousine Commission.

“And why shouldn’t someone in Queens, Brooklyn, the Bronx, or Staten Island be able to hail a legal cab on the street?" Bloomberg is expected to ask today, according to an excerpt of the speech. Currently, passengers in the outer boroughs must call a livery or black car in advance to arrange a ride. Jumping in one on the street is illegal.

"This year, we’ll establish a new category of livery cars that can make on-street pickups outside of Manhattan -- just like yellow cabs do," the mayor will say. "It will give New Yorkers in all five boroughs another safe, reliable and convenient option for getting around. Because whether you’re standing on 42nd Street in Manhattan, or 42nd Street in Sunset Park, Brooklyn, or 42nd Street in Sunnyside, Queens, you ought to be able to hail a cab."

Hizzoner will likely have an uphill battle. Already industry officials are pumping the brakes. Representatives of yellow cabs fear livery cabs could steal their fares, while livery cab companies are wary of the new regulations.

"Legalizing an illegal activity because it's been done for so long will immediately cut into fares, especially during the rush hours when yellow cab drivers who live in the outer boroughs pick up fares at the beginning or end of their shifts," said Bhairavi Desai, executive director of the New York Taxi Workers Alliance, a union that represents yellow cab drivers. "As liveries bring more riders into Manhattan, what guarantee do we have that the city will stop the illegal activities in Manhattan or the airports? Already, the city has turned a blind eye on such activity throughout Manhattan and the airports, which cuts deep into taxi driver incomes. This is a slippery slope with long-term implications."

Under the proposal, the new livery cab will still be banned from picking up fares in Manhattan and at the city's airports.

The Details of Legit Liveries

According to the Taxi and Limousine Commission, the city has nearly 38,000 "for hire" vehicles in the outer boroughs, including black cars, licensed liveries and limousines. Of that, between 26,000 and 27,000 are licensed livery cabs. In 2010, the commission issued 2,854 illegal hail summonses.

Under the mayor's plan, which has not been completely spelled out yet, passengers in the outer boroughs could still use any of those services. All they have to do is pick up the phone.

The proposal, which is cast as a sustainability initiative to get cars off of the streets, would create an additional class of vehicle. Cars already licensed by the Taxi and Limousine Commission could opt to join, but they would have to abide by the criteria, including the meter.

These new livery cabs would have to have credit card readers (now used in 40 percent of rides in yellow cabs). By requiring clearly marked cars, the proposed program would increase passenger and driver safety, according to the memo. It would also ensure passengers -- especially tourists -- get charged a fair fare.

Some livery companies, though, aren't buying it.

Anthony Amaro, an assistant manager at Arecibo Car Service in Park Slope, said it's safer and more economical for outer borough residents to call for his black cars.

"If you put in meters, it's basically going to be another yellow cab," said Amaro. His service provides outer borough residents a cheaper alternative, Amaro said. Arecibo charges a $16 flat rate from Park Slope, Brooklyn to Lower Manhattan. When asked if the service would support the program, Amaro said: "I don’t think so."

The preliminary proposal does not spell out whether the fare structure would be the same as a yellow cab. That would be established by the Taxi and Limousine Commission, according to the memo.

There has been no discussion of limiting the number of vehicles in the program, a TLC official said. An official also said these licenses would not be used in the same way as taxi medallions, which are expensive and limit the number of yellow cabs on the street.

To move forward, the proposal will have to have City Council approval.

“He is proposing a transformation of the taxi industry, and I think this is a proposal that has to be looked at carefully," said Vacca. "Is the medallion as valuable as it once was?" he asked. "From the livery cab industry perspective, they are going to say, 'Our business is going to decline if all you have to do is go out on Queens Boulevard and hail a cab.'"

The city points out that the practice of illegal hailing black cabs is already rampant. Critics of the plan counter that that doesn't mean the city should make the practice legal.

Doing so would devalue the yellow cab medallion, said Ethan Gerber, the executive director of the Greater New York Taxi Association, which represents a coalition of taxi owners. "It ruins the credibility of the city going forward," said Gerber. "If the TLC would simply enforce its own rules, the problem would go away."

The proposal is one aspect of the mayor's annual address this afternoon at the St. George Theater. Yesterday, the mayor was mum on what else he might propose.

"But if you come," he said to reporters on the speech, "I’d be happy to have you."