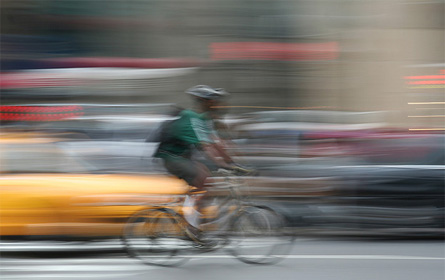 In the latest iteration of the bike lane debate, the City Council unanimously approved a package of legislation Wednesday to force the Bloomberg administration to report on pedestrian and bike-related accidents.

One bill requires the Police Department to update statistics on pedestrian or bicycle related traffic citations, accidents, injuries and fatalities online monthly. Another will force the Department of Transportation to track bicycle crashes for the first time.

The legislation is part of a larger citywide dialogue on bike regulations and the number of bike lanes the Bloomberg administration has created. While bicycle advocates claim the lanes have increased traffic safety and encouraged more New Yorkers to trade in their four wheels for two, some communities have vehemently opposed their construction, contending they take away parking and present a safety hazard.

Yesterday, Council Speaker Christine Quinn said the information gleaned from the legislation would help the city determine where bike lanes and other traffic calming measures should be.

"Getting people out of cars and on to bikes is a good thing," said Quinn. But, she added, "Bike lanes work great in some neighborhoods and don’t work well in others."

Last year, Stuart Gruskin, then 50 years old, was walking to lunch in Midtown when a deliveryman on a bicycle struck him. Gruskin lost his life due to injuries from the accident.

His wife, Nancy, joined the City Council yesterday to applaud the approval of the bike bills package, specifically legislation (Intro 374) that would compile collision statistics involving bicycles, including those between bikes and pedestrians, in an annual report.

"There were no accurate bicycle versus pedestrian statistics," said Gruskin. "These statistics are the foundation on which policy is built."

In addition to the bike crash bill, the package (Intro 370-a) will require the police department to post moving violation data on its site every month. The data will reveal who was involved, whether bike, car or pedestrian, and what the contributing factors were.

The final bill (Intro 377) forces the Department of Transportation to explain to community boards why it rejects a certain traffic measure in a neighborhood, which was proposed by the board itself or a councilmember.

The bike debate has heated up in recent months as communities question whether the lanes actually make riders, walkers and drivers safe. Some residents have called for the removal of bike lanes, while at least one councilmember wants to force all adult bicyclists to register and have licenses.

On Wednesday, both the speaker and the council's Transportation Committee Chair Jimmy Vacca said once the data is released the city should consult it before installing any more bike lanes.

The city's leading bike advocacy organization, Transportation Alternatives, says studies have shows bike lanes actually reduce the frequency of reckless riding. The group supports all three bills and suggests once the data is released it will support their side.