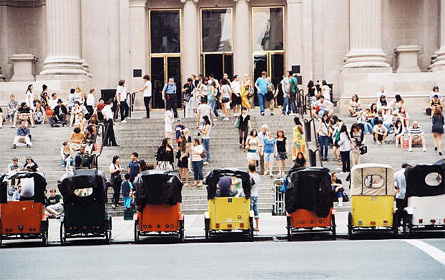 The council capped the number of pedicabs at 850 and made it easier for the city to suspend pedicabs' licenses after drivers receive multiple violations.

The move was the second attempt by the City Council in two years to curtail the growth of pedicabs, which up until 2009 were completely unregulated.

"We are at our saturation point with pedicabs," said Councilmember Dan Garodnick, the bill's sponsor, who represents Midtown East. "This is not the appropriate time to issue new licenses.

In addition to the pedicab proposals, the council also approved legislation that could ease alternate side parking regulations across the city.

A spokesperson for Mayor Michael Bloomberg said the administration supported both measures.

Stop by Central Park and you can't miss them.

The oft-colorful wheeled wagons shuttle tourists and Midtown revelers from the park to Broadway to restaurants. While the human-powered taxis are often full, residents and the taxi industry have complained about them for years, citing safety hazards.

The council initially attempted to regulate pedicabs in 2007, but the rules were struck down in state court.

In 2009, the council successfully established a licensing system for the industry for the first time.

Under the current system, pedicab operators had a limited time frame to apply for a pedicab license at the Department of Consumer Affairs. The pedicabs must stay out of bike lanes, pass inspection, and have seatbelts, tail lights and insurance.

On Thursday, the council went a step further. Under the legislation, which was approved by a vote of 44 to 1 with Councilmember Charles Barron dissenting, the city will not issue new pedicab licenses unless the number of vehicles falls below 840.

The new proposal would rescind a pedicab's registration plate for a year if it receives three violations within one year. Those violations could include broken seatbelts or brakes.

The Department of Consumer Affairs also would have the power to revoke a pedicab driver's license if he or she operates the vehicle twice in one year without a valid driver's license or with a suspended license.

The council also approved legislation to force pedicabs to abide by the city's parking regulations. Pedicabs would no longer be able to park in no standing or no parking zones, and they would have to steer clear of fire hydrants.

But not everyone in the industry has lent their support.

"I think its pretty unnecessary," said Robert Tipton, the owner of Mr. Rickshaw, a pedicab company, of the parking regulations. "There are other issues that are more pressing, one being the driver's license issue."

Currently, to obtain a pedicab license you only need a driver's license that is valid in New York State, which would include those issued in other countries. Tipton suggested the city should only allow drivers with U.S. driver's licenses.

From Pedicabs to Parking

Moving to the curbside, the council also approved legislation to allow community boards to reduce the number of days for alternate side of the street parking if the neighborhood meets certain cleanliness standards.

The street would have to obtain an average 90 percent cleanliness record for two consecutive years before the community board could move to reduce the number of alternate side days.

Under the legislation, which was passed by a vote of 44 to zero with one abstention, no street would be allowed to go below one alternate side day per side.

The city initially piloted reduced alternate side in Brooklyn starting in 2008. The council also approved legislation to require the Department of Information, Technology and Telecommunications to create an interactive map that would keep track of all street closures.