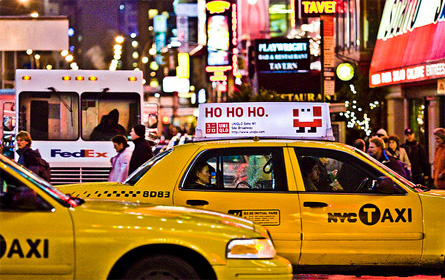 The City Council wants to slam the brakes on the taxi industry's bad apples.

To ensure taxi drivers do not discriminate against passengers' destination -- or race -- the council approved legislation Wednesday that would drastically increase fines for drivers who refuse certain passengers. The bill, which was approved unanimously, is part of a larger effort by the Bloomberg administration to ensure residents of the outer boroughs receive taxi service like those in Manhattan.

"You wait around, your arm out and a taxi finally drives up," Council Speaker Christine Quinn said. "You try to get in the car, and the driver won't let you. You say, 'Queens,' and the next thing you know the cabbie just drives off."

The council's proposal, Quinn said, would deter this practice.

The city's taxi drivers, however, criticized the measure, arguing it exaggerates the prevalence of driver refusal and distracts from the real issue discouraging drivers from outer borough trips: the economy.

The proposal is the latest battle between the City Council, the Bloomberg administration and the taxi industry within the last month -- disputes that have gone from fare hikes to a new class of cab.

No Right to Refuse

The legislation, which the mayor is expected to sign, would also affect drivers who overcharge passengers and who illegally ask riders where they are going before entering the vehicle. Asking the destination before entry, said council officials, is often seen as a way to avoid outer borough rides.

According to the City Council, the 311 system receives about 300 overcharging complaints a year. For refusals, council officials said 311 receives between 200 and 300 complaints a month.

"They've overstated the problem," she said. "Refusal summonses are actually fairly low when you consider the hours people work and the trips they complete."

The alliance has released its own proposal to spur rides in the outer boroughs. Desai said the Taxi and Limousine Commission needs to first approve a fare hike, which would make trips to Brooklyn or Queens more economical for drivers.

The alliance submitted a fare proposal to the commission last week. It includes a 50-cent increase for mileage cost, from $2 to $2.50, and a 10-cent increase in the waiting time fare -- from 40 cents to 50 cents. For the night surcharge, which runs from 8 p.m. to 6 a.m. daily, the alliance proposes a 50 cent increase, bringing it up to $1. The drivers are also asking for the first time for a morning rush hour $1 surcharge.

The Taxi and Limousine Commission has two months to consider the proposal, Desai said. If they decide to move forward with it, it would then have a hearing and eventually go to the commission for a vote.

To further increase service in the outer boroughs, Desai said the city should create pick-up stands around commercial or nightlife areas.

Back in January, the administration proposed allowing livery cabs to pick up street hails in the outer boroughs as a way to increase service. The practice is currently illegal -- livery service must be prearranged.

After the yellow cab industry and some City Council members expressed opposition, the administration went back to the drawing board.

Currently, said Taxi and Limousine Commissioner David Yassky anything is on the table. He is meeting with stakeholders to consider proposals -- from creating a new class or outer borough medallion to upping regulation of livery cabs.

"Our bottom line goal is to get decent taxi service in all five boroughs," Yassky said. "We're working daily with elected [officials] both in the City Council and the State Legislature to hash through the details of the plan that gets us the service we want."

In addition to the taxi legislation, the council also approved its largest rezoning, covering South Jamaica. The rezoning would preserve the area's low-density character, officials said, but also allow for larger building heights on main thoroughfares.