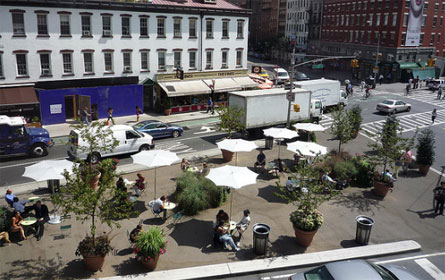 Photo by New York City Department of Transportation
The transportation department has created pedestrian plazas, like this one on Ninth Avenue in Manhattan, throughout the city. The porgrm has won wide praise, but area residents do not always approve.

The City Council yesterday flashed an orange light at a city Department of Transportation that some members see as ignoring warning signs in its push to make city streets more hospitable to pedestrian and bicyclists.

By unanimous votes, the council approved two measures, sponsored by transportation committee chair James Vacca, on projects that reconfigure city streets One measure looks forward, the other back, but both reflect the feeling among some council members and residents that the transportation department under commissioner Janette Sadik-Khan has become an agency with a mission that forges ahead with its plans for plazas and bike lanes without benefit of consultation or facts.

In Vacca's view, these bills would change that. "The days when the Department of Transportation could unilaterally reconfigure our streetscapes are gone," he said.

The first bill -- Intro 626A -- would require the transportation department to consult with other city agencies, including Small Business Services and the police and fire departments, before it reconfigures streets. It also would have to report to the City Council and relevant community board on the results of those talks.

City Council Speaker Christine Quinn and Vacca said the measure was prompted in part by complaints from small businesses.

"Many of the bike paths, many of the pedestrian plazas negatively impact small businesses and their ability to survive in the City of New York," Vacca said.

In addition, people with disabilities -- particularly the visually impaired -- have told council members that "pedestrian plazas have not been constructed in a way so that it is safe for them to move through the plaza," Quinn said.

The second measure â€“ Intro 671 -- requires the transportation department to provide statistics on the effects of the street change within 18 months of when the reconfiguration went into effect. This would include data on traffic flows, accidents and emergency vehicle response times. Quinn said was in part a response to complaints from residents of the Borough Park section of Brooklyn that the establishment of a pedestrian plaza there had slowed response time for emergency vehicles.

The administration has come under fire for its use of data to justify its ambitious street changes. When it announced the establishment of a pedestrian mall around Times Square, the said its would improve traffic flow. While the mall has done many things, it has not, by the city's own account, reduced gridlock or increased traffic speeds. The city first tried to keep that data private and then, when it finally was released, sought to dismiss the importance of its numbers.

Putting on the Brake

Yesterday's votes are the latest in a series of attempts by council members to slow down the transportation department's plans. Earlier this month, the council unanimously passed a bill requiring that the department give community boards advance warning of any planned bike lanes in their area and that the department participate in any hearing on the proposal the community board might wish to hold. Mayor Michael Bloomberg has signed the bill.

In February, council members approved a measure, later signed by the mayor, requiring the city to report on pedestrian and bicycle accidents â€“ including those in which a cyclist struck someone on foot -- as well as automobile related accidents. Those backing the bill, including the widow of a 50-year-old man killed when he was hit by a bike said more accurate figures could help the city craft a better policy on bike lanes.

As the administration has stepped up its effort for pedestrian plazas and especially bike lanes â€“ it has added some 250 miles of the lanes in the last four years -- opposition has increased as well.

Along with taking issue with the street enhancement themselves, opponents have criticized the administration for not adequately consulting with people in neighborhoods about where the bike lanes and plazas should go -â€“ or it they should be there at all.

"Bike lanes drop out of the sky without any notice to the community," Council member Lew Fidler, the sponsor of the bill requiring consultation with community boards, said last year.

While supporters of the recent council bills -- including Fidler -- deny they are anti-bike lane, some doubt it. Bicycle advocates said the measures would subject the lanes to a level of scrutiny not seen on many other projects. "No other safe-street improvement seems to get that kind of treatment," Michael Murphy of Transportation Alternatives told Capital.

As the debate has grown increasingly acrimonious, bike and pedestrian advocates say city residents want to slow traffic and make street safer for those who walk or bike. They cite a poll released in October, which found that 58 percent of New Yorkers support the bike lane program.

"Most New Yorkers like bike lanes," Noah Budnick, deputy director of Transportation Alternatives, has said. "I don't know anyone who s pro-crash or wants to see more injuries and deaths on our roads. Streets with bike lanes in New York City are 40 percent safer than those without."

Murphy expressed concern to a reporter that bills such as those passed yesterday might slow down the installation of new bike lanes. Of course, some council members might say, that's the idea.