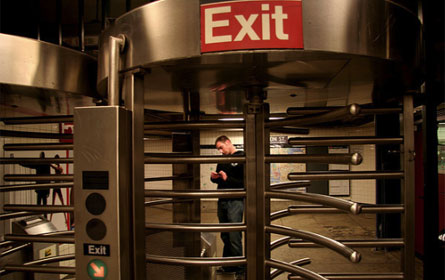 Sometimes it’s the little cases that go to the highest courts and establish new and surprising law. That’s what happened last month in the 2009 case of People v Joseph Hightower in which a New York City unlimited MetroCard was actually put to unlimited use. About ten million weekly swipes in the city’s transit system are on monthly unlimited cards, a card can only be used once in an 18 minute period at the same transit stop.

Hightower, a New Jersey resident, then 28, had purchased the unlimited use card but used it to sell discounted rides to travelers other than himself. He was arrested and by pleading guilty was eventually convicted of the misdemeanor of petit larceny. While the use of the card is transferable, selling rides on the card is prohibited.

An interim appellate court had upheld the conviction. But writing for the Court of Appeals, Chief Judge Jonathan Lippman, rejected the prosecution theory of larceny although conduct of the same type had long been treated as larceny. Citing the state Penal Law, Lippman held that no property or money had been taken from the New York City Transit Authority because they had never actually received money from the purchasing passenger. Had Hightower been charged with accepting money for the use of the card that would have been upheld. Although in addition to the larceny he had been charged with unauthorized sale of transportation services and also illegal access to Transit Authority services, he hadn’t been convicted of the charge of the unauthorized electronic swipe of the card.

The definition of larceny requires a taking. When, with intent to deprive another of property or to appropriate the same to himself or to a third person, he wrongfully takes, obtains or withholds such property from an owner thereof.”

While lawyers for the Manhattan District Attorney argued that the defendant deprived the Transit Authority of a portion of its business, Lippman’s Opinion rejected that theory, citing cases in which unpaid taxes could not be considered property stolen from the state. Here, the judge wrote in the unanimous opinion, “defendant was not in possession...of monies owned by the NYCTA.”

Hightower’s case was dismissed and with it his conviction. He had spent a day in jail. Counsel for him was Adrienne Hall of the Legal Aid Society.