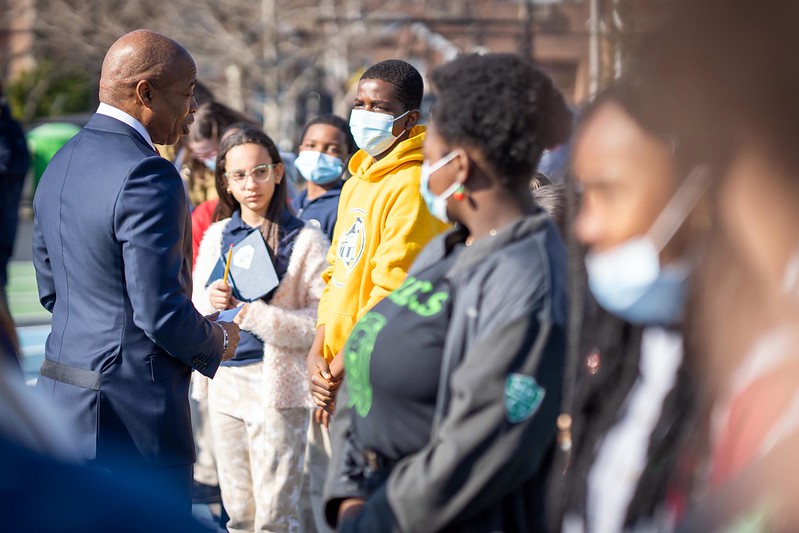 On September 29, the Adams Administration announced changes to the high school and middle school admissions process for the 2023-24 school year. Most significantly, middle schools, which had been unscreened for the last two academic years, can resume academic screening of fifth-grade students in admissions if the district superintendent so chooses.

Admissions to New York City high schools are the nation’s most competitive. The most coveted schools admit students on the basis of grades, state test scores (when available), and sometimes school-specific interviews, evaluations, and essays. The “winners” of the competition receive a free ticket to an education comparable to elite private schools. For those students who come from poor and working-class families, admission to “brand name,” well-resourced public schools can be life-changing.

But what of the “losers” who vastly outnumber the “winners”? As one high school student observed: “People say numbers don’t lie. Good, smart students get good grades and are thereby entitled to the city’s bulk of resources. The rest of us are left to fight over the scraps. That is the logic of our school system.”

Even some winners pay a heavy price. Black and Latino students who are offered the opportunity to attend one of the highly selective New York City high schools (including but not limited to the specialized schools such as Stuyvesant and Bronx Science) can feel marginalized. One Black student reflected: “Everyday walking through those doors I feel alienated, like a single piece of black pepper in a sea of salt…School should be considered your home away from home, yet all I can feel at school is out of place.”

High school screens will remain in 2023-24, with one substantial tweak: students whose grades are in the top 15% of their school–or in the city as a whole–will have priority in admissions to the city’s most coveted public high schools. This change could, in theory, increase racial and ethnic diversity in these schools to a certain extent, since middle schools are highly segregated by race and class.

However, coupled with other changes to the admissions process, a Department of Education (DOE) spokesperson told Chalkbeat New York that the city expects the changes to increase racial and socioeconomic diversity of students at screened schools as compared to before the COVID-19 pandemic, but not compared to last year.

In my research on historical and contemporary segregation in New York City schools, it became clear to me that students wish to attend a school where they feel a part of a community, and one that has sufficient resources. Finding such a school has long proven elusive for many Black and Latino students.

They may attend a co-located school that shares its building with five other schools; the demographics of these schools and the resources allocated to them often are starkly different, highlighting the vast disparities in the system.

Most devastatingly, Black and Latino students may feel their schools are “not good enough” for white students. As one former student told me about her “mainly Black and brown” school: “If you saw any white kids in the school it was like…‘What happened?’ It’s almost like: ‘How’d ya get here?’ You’re supposed to be in a better school with better academics. And because they were white, a lot of the kids just assumed they were a lot smarter than us. They put [the white students] on a pedestal–because of how much of our academia was lacking.”

These are the fruits of segregation and excessive screening. By late 2017, former Mayor Bill de Blasio had brought hope to integration activists by launching the School Diversity Advisory Group (SDAG) and naming Richard Carranza as Schools Chancellor. SDAG’s extensive recommendations to reduce segregation and increase equity resulted in little concrete action, an occurrence that echoed the demise of previous city panels on integration. Carranza spoke passionately about the need for integration, insisting in Spring 2019 that “we will not wait to dismantle the segregated systems we have!” By August, he conceded: “If I integrated the system, the next thing I’m doing to do…is walk on water.”

Shortly thereafter, SDAG released its second and final report on school diversity. Among its recommendations were the unscreening of all middle schools and some high schools. In the six months before the beginning of the COVID-19 pandemic in March 2020, de Blasio said virtually nothing about any such changes being implemented. However, in a covid-era change that integration advocates hoped would become permanent, mIddle-school admissions for the 2021-22 and 2022-23 school years were unscreened.

Those desires were dashed by the current administration’s recent announcement. Despite Adams’ insistence last November that city schools are “segregated intentionally,”

his administration has revealed little appetite for meaningful school reforms aimed at increasing integration and equity. At the recent news conference announcing the admissions changes, School Chancellor David Banks justified rigorous screening by arguing that hard-working students with high grades “should not be thrown in a lottery with just everybody.” It is wrong to classify students whose grades do not reach the top tier in this way. The less-than-stellar grades of a 12-year-old should not relegate them to the school system’s “scraps.”

There is a lot of work to be done in a school system with 1 million students, 85% of whom are students of color and more than 70% of whom are low-income.

District superintendents should resist pressures by influential parent groups to resume screening of 10-year-olds for middle-school admissions. The un-screening of middle schools brought some promising, if modest, changes to the racial and economic demographics of the most highly-regarded middle schools–at least in districts with considerable diversity. The system didn’t collapse.

Thoughtfully and deliberately increasing racial and economic integration in schools remains a crucial step for the city to move beyond its longstanding model where there are a smattering of “great” schools for the “winners,” and a much larger number that are short-changing their students.

***
Christopher Bonastia is Professor and Chair, Department of Sociology, Lehman College, and Professor, CUNY Graduate Center. He is the author of The Battle Nearer to Home: The Persistence of School Segregation in New York City (Stanford University Press). On Twitter @Uno_Collison.