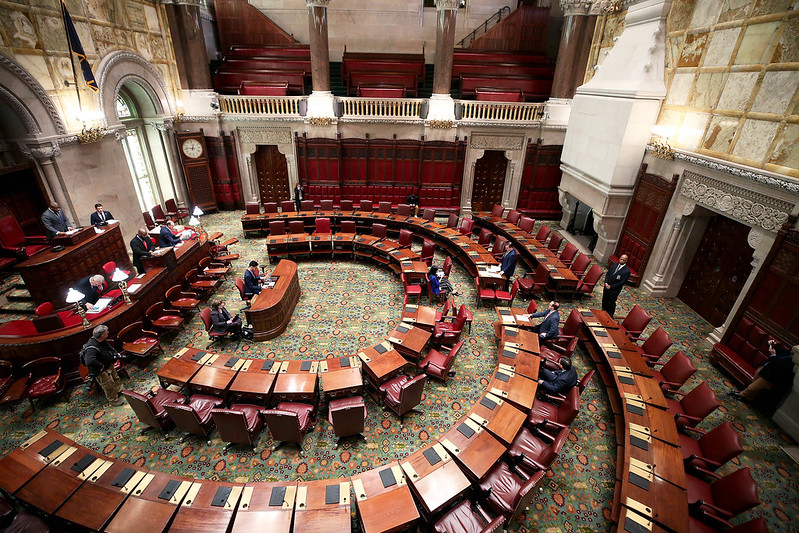 The United States Census released the nation’s population data by congressional and state legislative district on August 12, setting underway the re-districting of legislative seats, controlled by each individual state. The process will now unfold in New York and around the nation, with control of the House of Representatives and state legislatures on the line.

Major internal population shifts within New York State have profound implications for redistricting. New York gained about 823,000 people, an increase of 4.25%, between 2010 and 2020. All of the growth was downstate, as discussed in an outstanding summary of New York’s changes by John Bacheller, and shown in brief here:

This significant population increase downstate compared to Upstate likely means a decline in the power of the Republican Party in New York. Its power base has been Upstate, and,until recently, Long Island, and this redistricting cycle marks the end of GOP control of the lines of State Senate districts, which it held through most of the twentieth century, and for 2002 and 2012.

Additionally, since 2012, the year new district lines were put in place in New York based on the 2010 U.S. Census, New York’s redistricting structure has changed. A 2014 Constitutional Amendment created an Independent Districting Commission. New York is now one of 13 states across the nation that have such a commission. It will have the initial authority to draw the district lines for New York’s House seats and the seats in the Assembly and Senate.

The commission has already held public hearings and, in fact, commission staff confirmed to me that the first preliminary maps from the new body will be made public on September 15, 2021. The commission, whose members consist of equal numbers of Democrats and Republicans, along with several members jointly selected, is designed to draw fair districts and avoid partisan gerrymandering. It must produce maps no later than January 15, 2022.

If the commission fails to produce maps, or if two-thirds of both houses of the State Legislature reject the commission’s maps pursuant to a schedule over this coming winter, the Legislature has the power to draw new lines that must be signed by the Governor.

Since the 2014 constitutional amendment that was approved by voters and created the commission, Democrats gained a two-thirds majority in the State Senate, and kept the one they already had in the Assembly. Those majorities will await commission action, or inaction. Whatever changes they make to lines drawn by the commission are, of course, subject to court challenges.

Another constitutional amendment changing elements of the redistricting process is on the ballot in the November general election this year. It would speed up the timetable for approval and alter the threshold for the Legislature to reject the plans and draw its own lines, a change that is currently moot since in the intervening time the Democrats secured the double two-thirds majority.

During the 2012 redistricting, Republican and Democratic majorities controlled the redistricting process for the respective legislative houses where each held a majority of seats. The Democrats have controlled the New York State Assembly since they won the majority in 1974, and have had two-thirds majorities going back 30 years. The former Republican majority in the State Senate, however, had been under major threat for decades, and by the election of 2010 it held a razor-thin, 32-30 majority, to draw the 2012 district lines.

To preserve power, the 2011-12 Republican majority decided to create a 63rd State Senate district (an action permitted under the state constitution) in Upstate New York. The Senate Republicans’ goals necessitated putting smaller populations in the Upstate Senate districts than in the rest of the state. The drawing of state legislative districts is unlike congressional districts, for which nearly identical one-person one-vote populations per district are generally required. The rules for drawing of state legislative districts have allowed fairly wide population deviations from a strict one-person one-vote standard.

The table below shows district populations in the New York State Senate in 2012 and in 2020. On the left are 24 districts in Upstate New York, starting with the 40th district, most of which is north of Westchester County, all the way to the 63rd district in Western New York.

In the middle are 26 New York City districts, including two in the Bronx that extend into Westchester County. On the right are the 9 Long Island districts, as well as several districts in Westchester, Rockland, and Orange Counties.

At the bottom of the columns are the population sums for the various areas of the state, as well as the population averages for the districts in the separated areas, for both 2012 and 2020.

It’s always important to keep in mind the one-person one-vote standard that would create districts with even population totals. For 2012 that would be 307,589 New Yorkers per Senate district, and the new 2020 standard is 320,655. 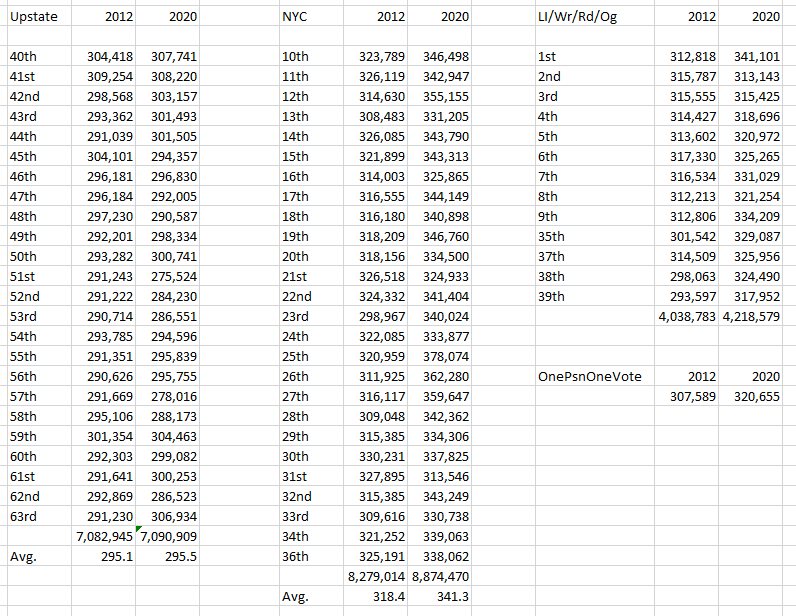 Despite the effort of the Republican majority in 2012 to preserve power by dropping the Upstate district populations below the standard, the plan didn’t work. The Democrats won a 33-30 split. However, a faction of the Democratic majority, known as the Independent Democratic Conference (IDC), then aligned with the Republicans and helped them preserve power all the way into 2018, when they finally realigned with the Democrats. Six of the 8 IDC members were defeated in Democratic primaries that same year, and another has since left the Legislature. After the general election in 2018, Democrats had won 41 of the 63 seats in the Senate, and via the 2020 elections, 43 of 63, reaching a two-thirds majority.

The new districting commission’s mandate is to produce fair districts, and having every district virtually identical in population, a pure one-person one-vote, is as fair as can be. Given 2020 Census numbers the new norm is now a little over 320,000 persons per district, up from over 307,000 based on the 2010 Census. The populations of the Upstate Senate districts now have an average of 295,500, about 25,000 persons below the one-person one-vote norm of 320,655, or a sum of 600,000 persons, nearly two Senate districts. New York City districts have a surplus above the 320,655 standard of about 538,000, about one and two-thirds Senate districts. The Metro suburbs have the remainder. Effectively Upstate New York must lose two Senate districts.

In the New York Metro area there are only five Senate districts still represented by Republicans, four on Long Island and one on Staten Island. The other 15 are among the 24 that lie mostly north of Westchester and Rockland Counties. As Bacheller pointed out, the population losses even within Upstate New York are concentrated in the rural areas; urban metro areas gained 1.2% in population, rural areas lost -3.6 % of their population. That is reflected in some of the Upstate Senate districts with losses; six districts are now below even 290,000 in population, some even below 280,000. Five of these six districts with the lowest populations are represented by Republicans.

Some analysts predict the equal representation of Republicans and Democrats on the districting commission will result in the failure of the commission to have a majority vote in favor of a districting plan, thus defaulting to the Legislature (which could reject even a plan that had been voted upon). I served with two of the Republicans on the commission, Charles Nesbitt, who had been the Assembly minority leader, and Willis Stephens, a lawyer from Dutchess County who is a sharp debater.

Nesbitt was, and I am sure still is, a decent and gracious man. But will he and Stephens vote to wipe out two of the last remaining 20 Republican Senate districts in the state, or vote for any plan likely to eliminate even one? I don’t know the answer to those questions but the Republicans have tougher choices ahead than the Democrats. Even if the districts were drawn neutrally and fairly, the Republicans are likely to be the inevitable losers. If the Legislature draws the lines, the Democrats in the Senate might be motivated to avenge many a redistricting wrong from decades past, or just address the population problems to shore up their Upstate incumbents while consolidating the Republicans into fewer rural districts.

The population shifts will also add at least one more Assembly district in New York City, whether the lines are drawn by the commission or the Legislature. In the suburbs the increasing presence of diverse populations could also strengthen Democrats. Most of what the Assembly Democrats have to worry about is where to put their surplus districts and members.

The result of redistricting internally in New York will be to consolidate urban and suburban power; House of Representatives seats for Congress are more likely to be the scene of bitter conflict over the future of the Democratic majority in the House in the national midterms in 2022.