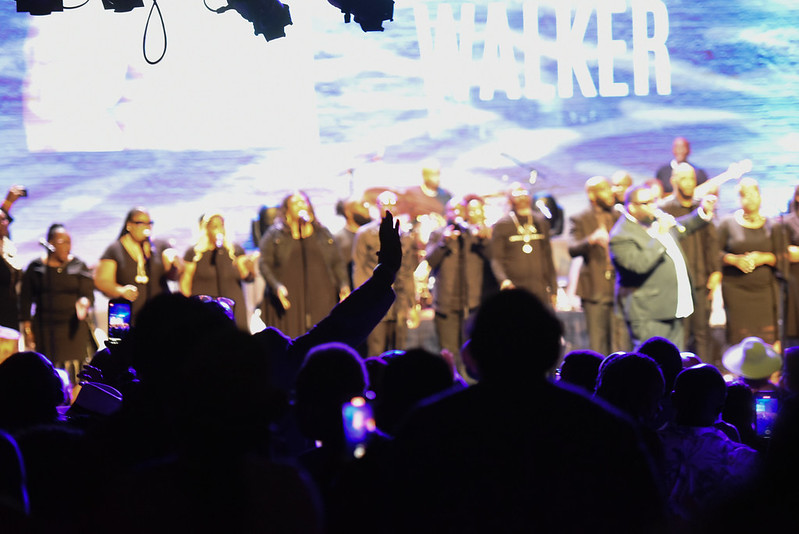 New York City was the epicenter of the deadly COVID-19 pandemic as it began in the United States. It recorded its first death from the disease on March 1, 2020. The city’s economy also suffered a massive setback during the lockdown in the early months of the pandemic.

A full job recovery is still several years away and the major problems that predated covid and persisted through it — poverty, homelessness, affordable housing, unemployment and under-employment — are still with us in the city and across the nation. Nonetheless, the drive to vaccinate the residents of the city is showing substantial success. If this achievement continues, the city’s ability to control the harm from this deadly disease will give the local economy a real chance to recover and, along with it, a chance for the city to get on top of its many problems, especially compared to many other jurisdictions in this country.

Interpreting New York City’s vaccination results is complicated because of under-reporting of vaccination rates by ethnicity, as well as the fact that the city is using older Census data. I have included a note on New York City vaccination data at the end of this article to discuss this concern.

The City’s Economic Recovery from Covid is Weaker Than the Nation’s
New York City needs as much public health and safety as the vaccines can give its residents because the city’s economic recovery is very weak compared to the nation as a whole. U.S. Bureau of Labor Statistics data shows the contrast — see employment recovery from the depths of the pandemic in April 2020 for New York City and the nation:

The data above show the city lost 927,000 jobs, 20% of its payroll employment, between February and April 2020. By August 2021, it had recovered 454,000 jobs, nearly half of those lost. The nation lost more than 21 million jobs in those first two months of the pandemic’s hold, over 15%, but recovered 17 million jobs, nearly 77%, by August 2021. Jobs dependent on social gathering, like in schools, and the economy’s weak links, like tourism, leisure and hospitality, the arts, recreation, and entertainment, need public health and safety. Policies at all governmental levels and in the private sector, to promote vaccinations will ultimately drive the economic recovery in New York City and elsewhere.

Tourism, Leisure, and Hospitality
A report on the impact of COVID-19 on New York City tourism by State Comptroller Thomas DiNapoli indicated this sector lost about 90,000 jobs in 2020. The sector has picked up in 2021 and President Biden’s authorization for vaccinated foreigners to resume travel to the United States begins November 8. Leisure and hospitality employment as a whole dropped over 300,000 — two-thirds of the total — from February to April 2020 and has still only recovered about half those jobs. International travel should stimulate the city’s economy and has significant secondary economic impacts on sectors like retail because international visitors spend plenty of money.

Vaccine Mandates
Vaccination mandates are foundational for the city’s economy. In July 2021 the city initiated a mandate for all its 300,000+ employees that they get vaccinated or get tested weekly, and then followed up with a full mandate for its school system employees to get vaccinated. Courts have so far upheld the city’s school employee vaccine mandate and the de Blasio administration reported that as of October 4, 95% of school system employees have received at least one dose of the vaccine.

The mandates are intended to stabilize and sustain in-school learning and assure parents of their children’s safety. As parents return to the labor market over time, employment in the city as a whole should gain.

On October 20, the city broadened the vaccine mandate to all its employees, beyond schools and its own health care workers, effective November 1. About 160,000 employees are newly covered; the de Blasio administration stated that about 70% of those newly covered have already received at least one vaccine dose. The unvaccinated employees can get $500 if they receive a vaccine at a city-run site by October 29. About 70% of the Police Department and 60% of the Fire and Sanitation Departments have at least one dose already. Based on the experience of the school system, it’s likely that an overwhelming portion of the remaining employees will comply.

The city has mandated proof of vaccination for many indoor locations, including restaurants, theaters, museums, concerts, gyms, and others. Mayor de Blasio said that vaccinations had risen 45% since the various mandates began being issued in July, through the end of September. The vaccine mandates are coinciding with the re-opening of Broadway and the cultural sector.

The Office Sector and Remote Work
There were 1.6 million office workers in New York City in 2019, according to a report on the impact of COVID-19 for this sector of the economy issued by the State Comptroller in September. This sector only lost 6% of its employment in 2020. The financial industry held most of its employment and contributed extensively to the tax base during the pandemic because most high-paying jobs continued. Remote working enabled much of the office-based workforce to continue their activity. In fact, by September 2021 only about 30% of office work had returned in person on a regular basis. A survey of major employers in this analysis reported on both remote work and vaccination policies:

The survey shows that remote work or hybrid remote and in-person work will continue for many major employers. Although many employers are not imposing vaccine mandates, the federal government’s mandate, not yet in effect, will ultimately affect many tens of thousands of office workers. The widespread vaccination rates in the city and its suburbs indicate many office workers will already be vaccinated upon their return and that many office spaces will have very high portions of their workers vaccinated and enjoy safe returns.

A Resilient City
The city is fortunate that such a major portion of the resident population has enough common sense to embrace getting vaccinated, despite the protests of a tiny minority. This common sense, in combination with the immense effort to distribute and administer the vaccines, may yield an extraordinary percentage of the population fully vaccinated sometime in 2022. The city’s residents and leaders may demonstrate yet again the resiliency that will enable it to match the recoveries from the Fiscal Crisis, 9/11, and the Great Recession.

An Important Note on NYC Vaccination Data
The city Department of Health (DOH) is continuously reporting covid vaccination data on its website, and there is certainly major progress in getting a very large majority of the city’s population vaccinated. As can be seen from the table below, taken from the website updated as of the morning of October 12, 84.1% of the adult population has received at least one dose of the vaccine, and 76.5% is fully vaccinated:

One concern I have is that the percentage of the population vaccinated may be overestimated, but not by a large amount. DOH reports it is using a U.S. Census 2019 population estimate for the city, which is 8.336 million. The U.S. Census population data for 2020 released in August 2021 showed 8.804 million, almost 500,000 more persons than the number being used by DOH.

DOH also reports that move-out and move-in data from the Post Office are not being used. These data indicate that the pandemic affected out-migration from the city in 2020, although some of that may have been temporary. Applying a ratio that adds the nearly 500,000 persons from the 2020 Census to the rates brings first doses and fully vaccinated down about four percentage points each, for one dose to 80% of adults and fully-vaccinated to 72.5%; still better than national rates, which as of October 12 were 78.4% for adults with one dose and 67.9% fully-vaccinated.

Vaccination Rates by Race
DOH also provides demographic and borough breakdowns for vaccinations. However, it is acknowledged in notes on data that vaccinations by race may have omissions from non-reporting. Race/Ethnicity is self-reported, but a person may simply not state their race at the time of vaccination, and/or the health care provider submitting the information to the city may not report the person’s race.

An October 12 DOH table for vaccination rates by race/ethnicity and by gender shows the following: 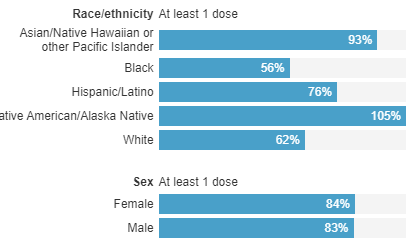 The race/ethnicity vaccination rate data are not consistent with a population that is 84% vaccinated with one dose. The 2019 Census data used by DOH show New York City is 32% white, 24% Black, 28% Hispanic, 14% Asian, and 2% other. Applying the vaccination rates to these proportions brings the adult one dose vaccination rate to 67%, way below the city’s reported 84% number.

I estimate one dose vaccination rates are more like 80% for whites and Hispanics, close to 70% for Blacks, and 90%+ for Asians.