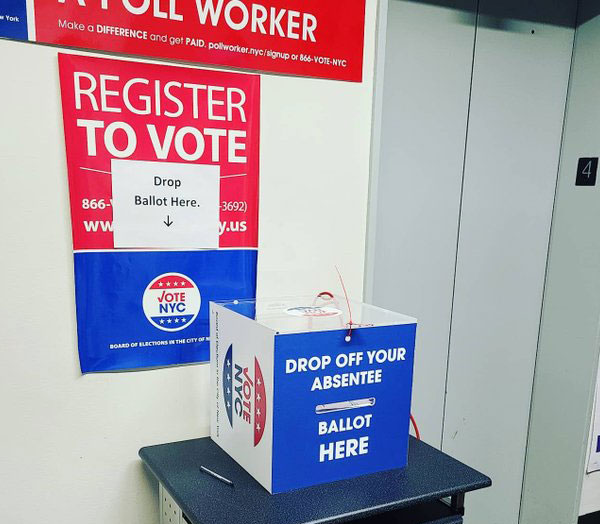 Three proposed amendments to the New York State Constitution, two on expanding voting rights and one on legislative redistricting reform, were defeated by the voters in this year’s general election. Two other ballot proposals were passed. In order to appear on the ballot for voters to approve or disapprove, all five proposed amendments had to pass two consecutive classes of the state Legislature.

We are still awaiting the full counting of many thousands of absentee ballots, but preliminary numbers based on in-person voting provide unofficial results.

Proposition Four, an amendment to permit no-excuse absentee voting, would have eliminated the longstanding requirement that a reason is necessary to vote by mail. During early voting and on Election Day, it lost 1.57 million to 1.21 million votes statewide, or 56.5-43.5%. Meanwhile, 350,000 voters did not cast on a vote on the proposal, leaving it blank.

The votes on Proposition One, which included several changes to legislative redistricting, and Proposition Three, repeal of the current constitutional 10-day deadline to register to vote before an election, had similar results. They carried in New York City but were defeated outside the city nearly two to one. Proposition Four, which would have paved the way for continued use of voting by mail on a wide scale, was defeated during in-person voting in 54 of the 57 counties outside the city, carrying only Westchester, Ulster, and Tompkins Counties.

The mail ballots now being counted will shift the margins on Propositions One and Three as well, likely in favor of both proposals but unlikely enough to get either approved.

The rejection of Proposition Four was particularly galling for me, as I had been the sponsor of this constitutional amendment in the State Assembly for many years before my retirement in 2016 after serving 32 years.

In early 2009, after becoming impressed with how voting by mail was increasing voter participation in states like Washington and Oregon, I introduced the bill and carried it for eight years before finally getting it passed the State Assembly in 2016, the year I left. Getting a constitutional amendment on the ballot is no easy task; it takes two successively-elected classes of both Houses of the Legislature passing the proposal each term to place it on the ballot for the people to vote on. It took a Democratic Party takeover of the State Senate before no-excuse absentee voting could pass in that house.

The proposal was voted on by both state legislative houses in the 2019-2020 term and again in the new term in 2021 to reach the ballot this fall.

How could giving people the unimpeded right to vote by mail have lost in heavily Democratic New York, just a year after a presidential election where the COVID-19 pandemic resulted in a massive expansion of vote by mail, in New York and across the whole nation?

Voting by mail was a major national issue, seen as a dramatic way to protect public safety during the pandemic. Donald Trump spent months both before and after the election denouncing mail balloting. Regardless of Trump’s ranting, 46% of the American electorate voted by mail in the presidential election, and in some states voting by mail was nearly universal. In New York, where Biden won 61% of the 8.7 million votes, more than 1.7 million New Yorkers voted by mail, about 20%.

Biden won 76% of New York City’s 3 million votes, and an extraordinary 23% of the city’s voters, 663,000, voted by mail. The expansion of mail ballots in New York had begun after COVID-19 exploded. New York’s April 2020 presidential primary was delayed until June. Then-Governor Cuomo issued an emergency order permitting COVID-19 as a reason to vote absentee and ordered the state’s election boards to send out absentee ballot applications to every Democratic voter (the Republican presidential primary was cancelled). There were 1.7 million votes in the Democratic presidential primary despite the fact that Joe Biden had already effectively won the nomination.

The margins by which the propositions were defeated are likely to still tighten as mail ballots are counted and given that they are disproportionately Democratic. It would be a surprise if the people who voted by mail just now, would vote “no” on voting by mail. Unfortunately there probably aren’t enough mail ballots to alter the outcomes.

There were only 75,000 mail ballots in New York City, a little less than 8% of the 1 million votes counted in person in the five boroughs. There were 2 million in-person votes outside the city, according to election night results from the State Board of Elections, again without counting the mail ballots. Even if mail ballots were an additional 10% of the vote outside the city, or 200,000, even lopsided "yes" votes for the proposition would not be enough for all the mail ballots to alter the outcome, although they could cut into the margin of defeat substantially.

Then there is the New York City election itself. In the city, Democrat Eric Adams had 676,000 in-person votes. “Yes” on Proposition Four had 479,000 votes, 200,000 fewer than the number who voted for Adams and roughly the same number as left the proposition blank. “No” on Proposition Four has 335,000 votes in the city, similar to the vote for Republican nominee Curtis Sliwa, who has 293,000 votes for mayor prior to the absentee count. Conservative Party nominee Bill Pepitone got another nearly 12,000 votes. That means the “no” vote was essentially a Republican vote.

There was little meaningful publicity on the propositions. I received calls from local residents asking about them on Election Day because they had not heard of them, and my wife said she had heard nothing about the propositions when I mentioned them to her about two weeks before the election. She is an avid follower of political news. The New York Times editorial board buried its support for the propositions by subsuming it in a late October piece about how bad the New York City Board of Elections is, even though reform of the Board of Elections was not on the ballot.

Meanwhile, on Long Island: Nassau County Executive Laura Curran, a Democrat, is losing to her Republican opponent Bruce Blakeman by about 12,000 votes out of 260,00 cast there, with about 21,000 mail ballots still to be counted this week. In 2020 in Nassau County, there were about 731,000 votes cast in the race for president, meaning the vote this year dropped by a staggering 60%.

The “no” vote on Proposition Four in Nassau was 151,000, the “yes” vote was 87,000, more than 35,000 votes below Curran herself. About 20,000 in-person voters in Nassau left Proposition Four blank. It looks like all the Democrats needed was a little information. If the New York State Democratic  Committee had just done one mailing, even to just the 1.7 million Democrats who voted in the presidential primary last year, that might have been enough.

Being able to vote by mail as an integral part of the election process is still an extraordinary benefit and believers in good government and healthy democracy should not give up.

Governor Newsom just signed a new law in California requiring every voter to get a mail ballot for every election. New York has made some good changes regarding mail ballots. Every election board must now have an online application, but requiring a reason to vote by absentee will continue. In 2020 and 2021, COVID-19 qualified as a reason not to physically vote in person, but one hopes covid will go away sooner rather than later.

I hope Assemblymember Clyde Vanel, the sponsor in that house, and State Senator LeRoy Comrie, the sponsor in the Senate, will continue their efforts. My successor in the Assembly, Robert Carroll, is actually the sponsor of the amendment repealing the 10-day registration deadline, and he has made clear he will keep fighting.

Next time let’s hope supporters of the measure don’t take victory for granted.