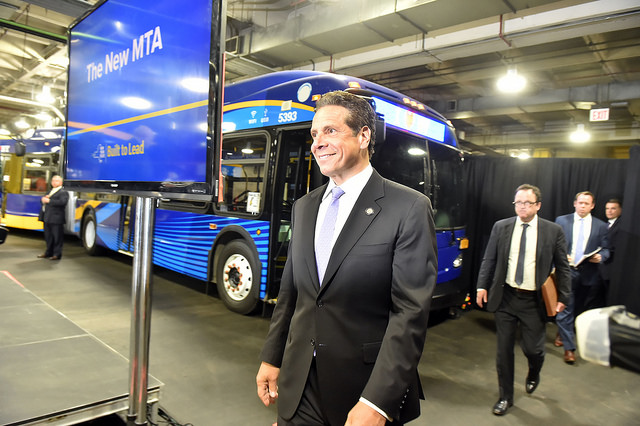 Governor Andrew Cuomo’s recent vague interest in congestion pricing as a solution to problems at the MTA may give new life to one of former Mayor Michael Bloomberg’s key policy goals, but absent transportation improvements officials could be making now, pricing will not save our subways. We cannot let them off the hook in search of the perceived silver bullet of congestion pricing.

The transportation community has been salivating over Cuomo’s statement that “congestion pricing is an idea whose time has come,” hoping that the governor will be able to convince the state to put a cordon toll around Manhattan south of 60th Street. Such a cordon toll, which would charge drivers entering the area on a daily or per trip basis, is reflective of similar policies elsewhere, particularly London, which implemented a congestion charge in the central city district in February 2003. Yet commenters and policy nerds this side of the Atlantic have missed the real substance of London’s improvements, and in doing so, they are giving our elected officials a pass on work they should be doing right now, regardless of the status of the pricing proposal.

What today’s transportation advocates are missing is that the key ingredient to London’s success was not its charge but its buses.

Beginning in 1993, ridership on London’s double-deckers increased annually, and was up 37% by the time the charge was implemented in 2003. In 2004, London’s buses carried more passengers than the New York City subway. While those ridership numbers are impressive on their own, what they signify is an overall shift away from cars to buses, bikes, and walking. London’s congestion charge was envisioned as a specifically anti-car policy, designed to make it easier for buses and taxis to traverse the city center.

When New York City congestion pricing advocates see London’s roads covered in bus lanes, they may imagine that the charge enabled such a shift, freeing up road space to then be taken over by buses and bikes. In fact, nearly all of London’s 180 miles of bus lanes were implemented before the congestion charge, in that era of increasing ridership between 1993 and 2003. The lanes and other improvements insulated London’s buses from congestion enough, even before the charge, to improve rider experience and reduce excess waiting time at stops. Combined with a lower fare on buses compared to the tube, the operational improvements led to increased ridership and declining car use before the charge policy was even developed.

The city currently has just over 50 miles of bus lanes. While buses have priority at most intersections in London, such priority only exists in New York on four Select Bus Service routes. As congestion has risen, bus ridership has fallen as bus speeds have slowed to a level barely faster than walking.

There are high-occupancy vehicle (HOV) lanes, used by both buses and cars with two or more occupants, in the tunnels and in the mornings on the Queensborough and Manhattan Bridges. The tunnel HOV lanes serve the express buses, the second-most heavily subsidized way to travel in the city after the commuter rail. Currently, the Queensborough bridge carries three local routes and 18 express routes. There are no buses that cross the Manhattan Bridge and benefit from the HOV lane.

For New York’s system to match London’s status before the charge was implemented, we need not only priority for buses on the roads but also more local buses into Manhattan. Based on London’s experience, getting drivers out of their cars requires a double shift.

First, some subway riders shift to buses for shorter trips; then drivers, who generally take longer trips, switch to the newly opened subway space. New York’s bus system largely lacks bus routes to accommodate people switching from the subway to bus. Currently, only a single local bus goes from Brooklyn to Manhattan, the B39, which runs only between the Williamsburg Bridge Terminal and Delancey Street, and comes every half hour. Unsurprisingly, it has the lowest ridership in the bus system. Without more direct bus connections to Manhattan, New York severely limits the bus system’s ability to provide a subway relief valve.

To be clear, there are activists calling for New York to focus on its bus network, but the centrality of the bus network to the functioning of the whole system is not fully depicted. The Bus Turnaround Campaign, comprised of the Riders Alliance, TransitCenter, TriState Transportation Campaign, and the Straphangers Campaign, have called for bus improvements for the sake of riders, but not as a way of improving transportation in the city as a whole, though their recommendations are based in part on London’s improvements, including increased bus priority, less circuitous routing, and improved fare payment.

What is frustrating is that many advocates believe that they have to support the pricing proposal in order to achieve bus system improvements, and that others feel as though they don’t need to advocate as hard for buses because the charging regime will magically improve the buses. The reality is that absent good alternatives to switch to, any charge that is politically feasible (maybe no more than the cost of a subway fare, well short of what is proposed in the most thorough proposal to-date, the Move New York plan) will be ineffective at reducing congestion and thus at improving the buses. London’s temporary drop in congestion following the charge was made possible by the bevy of available bus seats. While New York has available bus seats, they are not yet good alternatives. If they were, we would have seen bus ridership increase during this especially difficult subway summer congestion pricing is supposed to fix, and we didn’t.

If New York wants to seriously improve the transportation system, it needs an all-out campaign on the buses, one with the same level of media attention given to a single Cuomo quote on congestion pricing. Because so much of the bus system is about how we prioritize our roads, this is a goal that a city mayor can actually make a significant dent in without the governor, the kind of transportation improvement our mayor enjoys. So rather than wait for Governor Cuomo to save us via a pricing system that won’t work in our current system, let’s appoint a congestion czar and get serious about a transportation system that provides affordable access for all.

***
Rosalie Ray is a PhD student in Urban Planning at Columbia University. Her research focuses on London's bus improvements in the 1990s and early 2000s.