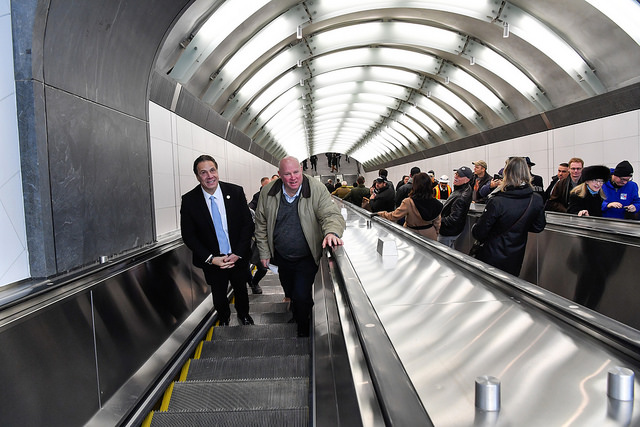 Governor Cuomo’s “Fix NYC” commission produced a framework for a congestion pricing plan, released just after the governor’s Executive Budget for the 2018-19 Fiscal Year, which begins April 1. The congestion pricing framework outlines a three-year phase-in that would provide revenue of $1 billion to $1.5 billion a year starting in 2020, most of which would be intended for the MTA Capital Plan.

That is also the year the MTA must begin its next five-year capital plan for continued investment in the upgrade and preservation of the subway, bus, and commuter rail systems. The current $30 billion plan, the 2015-19 plan, faced a shortfall of $15 billion when initially proposed in 2014, and it was not until 2016 that the governor and the Legislature finally adopted a framework for that plan. The 2020-2024 plan likely faces a similar funding shortfall of $15 billion, so money flowing from a congestion pricing program for the MTA in 2020 would arrive just in time to fill much of that shortfall, although the Fix NYC framework did not outline a specific disposition of the money from a congestion pricing set-up.

A November 2017 report by State Comptroller Tom DiNapoli, “ Financial Outlook for the MTA,“ stressed that the MTA’s capital funding shortfalls could be even larger than $15 billion because more than $7 billion in the 2015-19 plan that the state government committed to providing the MTA still does not have an identified funding source.

Beyond that, MTA Chair Joseph Lhota’s Subway Action Plan Phase Two indicated a need to add $8 billion in capital funding for the subway system. The MTA is not under an obligation to offer the details of its 2020-2024 Capital Plan until the fall of 2019 so it is not clear how all these unmet needs and proposals might fit together. But a shortfall of more than $20 billion is likely.

The comptroller’s office suggested the MTA accelerate the release of the details of its 2020-24 plan to enable greater public engagement in the process of coming to terms with these important decisions. The MTA should do this -- the governor, the Legislature, and the public need to get a handle on what the MTA thinks is needed sooner rather than later. (The comptroller’s report confirmed the concerns raised in my September column: “The MTA’s Long-Term Financial Problem is Severe and May Soon be Worse.”)

If the Legislature does not enact a formidable congestion pricing plan, worth $1 to $1.5 billion a year, enough revenue to support $10 billion or more in bonded funds for the mass transit system, or find some other alternative, it will be catastrophic for the subway, bus, and commuter rail systems, the fundamental infrastructure that allows for the wealth of the New York City metropolitan area. In fact, even if the proposed congestion pricing plan is adopted, the MTA’s greater than $20 billion shortfall would only drop by half and there would still be $10 billion to find unless the federal government were to step in to provide much larger amounts of money than at present.

Mayor de Blasio’s proposal to tax millionaires was envisioned to raise $750 million a year, with $500 million to fund $8 billion worth of bonds for the MTA, and $250 million to subsidize low-income New Yorkers’ subway and bus rides with half-fare MetroCards. Together the congestion pricing plan and the millionaires tax might raise nearly $20 billion for the MTA, coming close to closing the gaps in meeting mass transit capital needs.

Both proposals face significant opposition in the Legislature, from State Senate Republicans opposed to the millionaires tax, to everyday legislators of both parties who simply don’t wish to impose new charges or fees on their constituents to drive into Manhattan, either because they feel the charges are unfair or won’t solve the congestion problem.

Governor Cuomo has not yet submitted a bill to the Legislature that provides the details of the congestion pricing plan or how the money would be used. He has said he wants to discuss the issue with the Legislature first, although he has embraced the concept advanced by Move New York that the tolls on the outer borough bridges that don’t feed the Manhattan central business district should be reduced. That means some of the Fix NYC revenue would be diverted to reduce those particular tolls and not available to the MTA for its capital needs.

The governor has also submitted bills in the budget to force New York City government to come up with much more money for the MTA, a move the de Blasio administration is strongly opposing.

One bill would force the City to pay the 50% of Chair Lhota’s Subway Action Plan that the chair had demanded of the City and that Mayor de Blasio had refused to pay. Another bill would give the MTA the power to create special districts in New York City where subway expansions add property value and allow the MTA to obtain portions of city property taxes related to the new value created for the MTA Capital Plan. The concept was used to pay for the 7-train extension by dedicating revenue from property in the Hudson Yards area to cover the costs, although that plan was a creation of the City of New York and the City controlled the dispositions of funds, unlike the governor’s proposal here, where it does not appear the City would have a say in the matter.

Another major issue is the gargantuan expense of the MTA’s construction programs and purchases. A recent New York Times series described the immense waste of funds in the projects. The MTA, the governor, and the Legislature cannot ignore the problem -- the size of the MTA’s needs just costs too much money and the City and State just can’t afford to write checks to cover $20-30 billion shortfalls.

Right now congestion pricing is the main issue on the table. Mayor de Blasio and the Legislature should support it.

Governor Cuomo and Mayor de Blasio should bury the hatchet, at least as far as the mass transit system goes. There needs to be a consensus about addressing the giant shortfalls faced by the capital needs of the system. It’s also worth mentioning that both former Mayor Bloomberg and the newer Move New York plan sought to use congestion pricing funds to improve express bus service in areas of the City poorly served (or not served at all) by the subway system, and that issue, among others, certainly needs to be taken into account.

The MTA needs an astonishing $2 billion a year in new sources of revenue for the cash and debt service on bonds to cover more than $20 billion needed through 2024-25. If congestion pricing fails and there is no meaningful replacement the prosperity and public safety of the metropolitan area will be threatened.