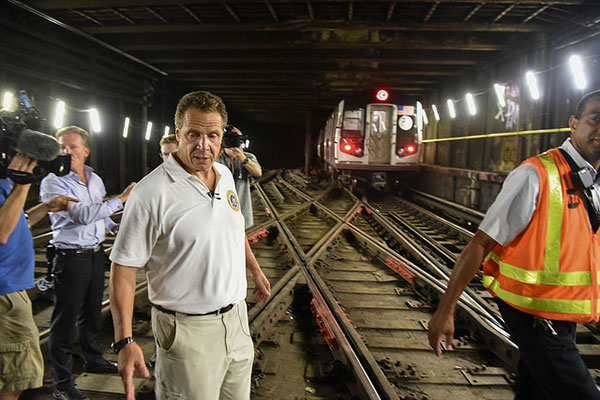 photo via the Governor's office

There is plenty of debate ongoing about the pros and cons of congestion pricing - but little discussion yet about the purpose of creating such a large flow of money -- $1-$1.5 billion a year -- that logically must be a way to fund the next MTA capital plan. That plan is due out in the fall of 2019 for a five-year cycle from 2020 through 2024.

The MTA had estimated that both the existing plan (2015-19) and the prior plan (2010-14) would cost about $30 billion each. For both plans, the MTA, the Governor, and the Legislature had trouble figuring out how to raise the money to cover such immense costs, and the 2010 plan was ultimately downsized. The next cycle will have the same problem: where to find money to pay for it. In fact, the problem of paying to keep the subway, bus, and commuter rail system in a state of good repair and pay for expansion projects will continue for decades.

In October 2013 the MTA put out its 20-year Capital Needs Assessment, 2015-2034, and identified needs which would cost $106 billion (in 2012 dollars) to pay to keep the system in a state of good repair, without even considering the cost of expansion projects. The cost of the expansion projects, East Side Access, Second Avenue Subway, and the LIRR Main Track, are $7 billion in the current plan. The State of Good Repair (replacing track, signals, stations, subway cars and buses, etc.) for the existing system is $25 billion in the current plan.

Governor Cuomo, MTA Chair Joe Lhota, and the Fix NYC panel have said very little about just how problematic the MTA’s long-term funding needs really are. There is a proposal in Gov. Cuomo’s new executive budget plan to force New York City to pay half the recurring maintenance costs of Lhota’s Subway Action Plan, estimated at $300 million a year by 2020, which Mayor de Blasio is refusing to support, but that is primarily for a step-up in regular maintenance, not capital projects.

The current capital plan had a shortfall of half the needed funds, $15 billion, until the Governor and the Legislature patched up the problem in 2016 by promising in state law the MTA would get the money when it needed it, meaning it would have to spend down what it had available first.

There is still no congestion pricing bill submitted by the Governor for the Legislature to consider, although in January the Governor’s Fix NYC panel issued its report that framed a congestion pricing scenario about the same time as he released his budget. A new state budget is due by the April 1 start of next fiscal year. That means the current discussions are more about whether the Legislature will even entertain the idea of charging vehicles to enter the Manhattan business district, without considering the specifics of the charges or what to do with the money.

The Legislature will skip convening in Albany during its annual mid-February break and not return until the end of the month at which point the Assembly and Senate will develop their one-house proposals for the budget. That begins a process in March to negotiate and adopt the next state budget by the April 1 deadline. The budget itself is controversial, as usual, with the Governor seeking $1 billion in new revenue to plug the deficit, and New York City complaining that his budget plan reduces or limits state aid to the city, or forces cost shifts, of $750 million, not counting proposed MTA cost-shifts.

For each house to prepare its budget proposal, scheduled for passage in mid-March, decisions will need to be completed by the end of the first week in March. With so many tough perennial issues to resolve for the budget, it is very possible that resolving major mass transit issues will be delayed until after the budget, with congestion pricing an open question.

State Comptroller Tom DiNapoli reported last fall the MTA was likely to face another $15 billion shortfall for the 2020-24 capital plan, and possibly much more because phase two of the MTA Subway Action Plan indicated a need for another $8 billion for New York City Transit. But right now the Governor, Chair Lhota, and legislators aren’t articulating this problem.

It is always important to note that it is an election year. If congestion pricing fails there will be a shortfall for the MTA of at least the sum of money congestion pricing would raise. If that was the case, there would be no place to go except another tax increase (and/or several large fare hikes) to fund the mass transit system. The City of New York can only raise the property tax. Only the state government can raise the payroll tax, the personal income tax, the corporate income tax, the sales tax, real estate transaction taxes, etc., or approve the City of New York raising any of its own taxes beyond the property tax.

Chair Lhota claimed the City is responsible for the capital needs of New York City Transit ($16-17 billion in the current 5-year plan) on the grounds that a 1953 law said so. That law, Section 1203 of the Public Authorities Law, did in fact say that but added that the City was responsible for $5 million a year, with anything more than that requiring mayoral approval.

That $5 million cap has not been changed since 1953; the law is an anachronism. When the MTA was created in 1968 the Legislature allowed the City to draw on bridge and toll surpluses for the mass transit system, and in 1981 began passing new state taxes within the MTA region, to dedicate to the MTA, for the obvious reason that the City can only raise the property tax. It is my considered opinion that the Legislature will not raise taxes (and the MTA will not do a fare hike) in an election year, so it’s congestion pricing or bust this year as far as mass transit is concerned.