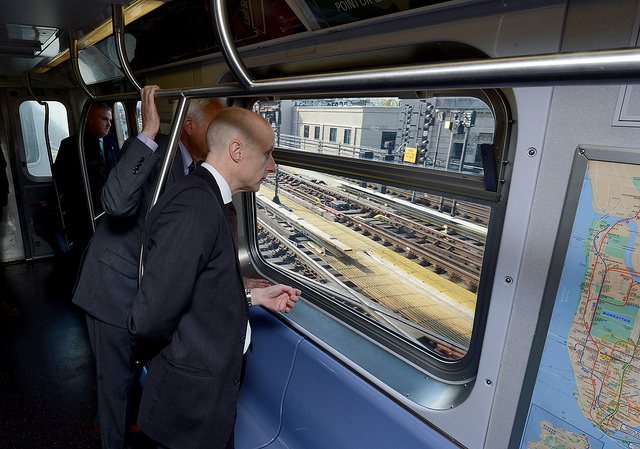 New York City Transit’s new president, Andy Byford, recently presented a major plan to fix the subways, called “Fast Forward,” which involves a massive sustained investment in upgrading and modernizing the subway system, combined with a spending speed-up by closing more subway lines on nights and weekends to get the work done more rapidly. Other major priorities are also in the plan, like improved bus speeds, providing access for disabled people at more stations, strengthening construction management, and improving relationships with employees.

The keystone, however, is implementing a modern, computer-based train control system to improve the frequency and reliability of the subway trains with billions of dollars in investments in advanced signal systems. The ambitious goal -- a vastly improved transit system -- is what the riders and the people and businesses of the city and the metropolitan area want and need.

The MTA did not publish official figures on the costs, causing the press to seek unofficial figures, which were reported anywhere from $17 to $19 to $37 billion for different time frames. The MTA claims it is costing things out. The public is also being subjected to ongoing political theater as public figures use each other as punching bags about the MTA, with Cuomo versus de Blasio and Cuomo versus Nixon as the main events.

While the MTA has given the public a stated goal of a better system and a bare outline of a plan to get there, it has left the public in the lurch in relation to other key information beyond cost. This includes information to see how the plan matches up with the rest of the system’s needs that have to be paid for, everything from the expansion projects like East Side Access and Second Avenue Subway, to basics like replacing track and the legacy signal system that must be done continuously, to buying new subway cars and buses, to keeping the suburban rail lines running.

Additionally, assuming the MTA has to borrow a lot more money, the public deserves to know how much new revenue will be needed to cover a lot more debt, and when. There is also precious little on exactly how the MTA might gain control of the unending cost overruns on the multi-billion dollar expansion projects. Let’s put the punching bags in the corner and start looking at what kind of information deficit the MTA has provided the public.

Still in construction are actually two capital plans. An April 2018 report to the MTA Board Capital Program Oversight Committee shows that the 2010-14 Capital Plan is still not finished -- more than $5 billion of the $32 billion plan, which included Federal Hurricane Sandy recovery funds, has yet to be received. The current $33 billion 2015-2019 plan has only received $3.5 billion and is still 90% incomplete!

The report also says in 2018 the MTA plans to commit $7 billion to capital construction -- a pace that would result in most of the current plan rolling over unfinished into 2020 and beyond. The New York City government had actually given more funds to the two plans than the State government -- $879 million versus $465 million, by March of this year. The 2015-2019 Plan is running five years behind schedule, and the MTA is going to exhaust its available resources far short of completion. When this is going to happen is one of the main information deficits.

The current plan has at least one dry hole: a $7 billion IOU from the State written in law that gets provided when the MTA exhausts its current resources, or by 2025. The MTA needs an extra $600 million a year in a new revenue to pay debt service on what I estimate to be $7 billion in bonds to fill that hole.

The agency has a second dry hole: it projected a $600 million deficit by 2021 in February (even after two fare hikes), which resulted in Standard & Poor downgrading the agency’s bond rating. Agency officials also told a senior state legislator before the state budget adoption that the MTA could not afford the $11 billion commitment to the capital plan that is supposed to be funded by the MTA itself. These two problems will likely come together around 2021 but the MTA is now not giving a date to the public for when new revenue sources will be needed.

These shortfalls don’t include the new Byford plan.

Information deficit one, therefore, is how much money the MTA really needs in new revenue to pay for the current plan, before you even put the Byford “Fast Forward” plan on top of it. The answer is probably more than $1 billion a year before Byford. Information deficit two is how much money the Byford plan will cost on top of the current capital plan and its successor (the 2020-2024 plan), and how much new revenue will be needed for that.

The Byford plan has two five-year phases to get the new signal system constructed. If these investments and the money needed start moving soon, the first phase would overlap with the completion of the 2015-2019 capital plan, out to 2025. The second phase would overlap with the 2020-24 plan still in development by the MTA, with negotiations over funding between the State and the City to come. That 2020-2024 capital plan is scheduled to be provided to the MTA Capital Program Review Board (CPRB) in the fall of 2019. The current 2015-19 plan can be amended at any time with approval by the CPRB.

Governor Cuomo reaffirmed his support for congestion pricing shortly after the Byford plan was released; Mayor de Blasio did the same for the added millionaires tax he’s long-pursued, and Cynthia Nixon endorsed both plus a pollution tax as well. In truth the sum of revenue from a congestion pricing plan and added millionaires tax are probably both needed to get to 2025, complete the current capital plan, and overlay it with phase one of “Fast Forward.” New sources of revenue will also be needed for phase two of “Fast Forward”  plus the regular needs of the system, but those requirements are seven years off or more, so while long-term funding streams are needed, we don’t need to give everybody headaches about those numbers right now.

The Legislature created a Metropolitan Transportation Sustainability Advisory Workgroup in the budget, consisting of a group of appointees by the Governor, the Mayor, the Assembly, and the Senate, to report back to the Legislature at the end of 2018 on the host of complex issues associated with mass transit. Reporting was also required on the MTA’s Subway Action Plan, which the State forced the City to pay half of after Mayor de Blasio refused.

The Legislature should follow this up before the session concludes with a requirement that the MTA submit its 2020-24 plan earlier than fall 2019, to address the information deficit. The requirement should include an integration with the Byford plan and details of how costs can be controlled and contained in the capital construction budgets.

The MTA needs to cost out the ambitious goals and let the public know how much money is needed soon -- the political theater probably won’t stop for a long time but it would help if we could all work with the right numbers.