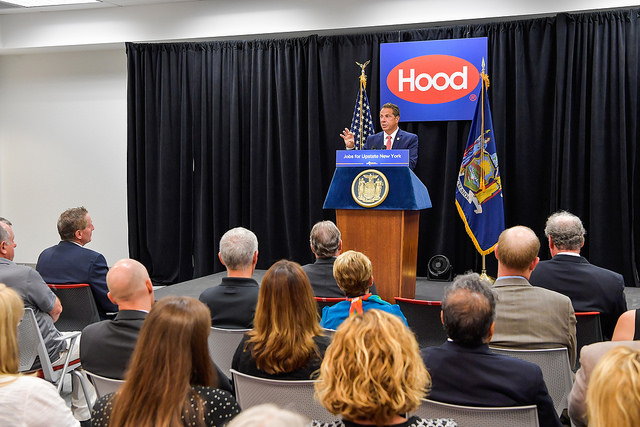 The health of the Upstate New York economy is a major issue in this year’s election for Governor. Two candidates in the general election, Republican Marc Molinaro, the Dutchess County Executive, and Stephanie Miner, the former mayor of Syracuse, a Democrat planning to run on an independent line, hail from Upstate, and are already in part centering their campaigns on criticisms of state government’s efforts to help the Upstate economy. Governor Andrew Cuomo’s rival in the Democratic primary, Cynthia Nixon, is also making it a point of attack.

Ironically, a federal corruption trial is underway against former SUNY Polytechnic President Alain Kaloyeros, who had been given a mission and vast resources by Cuomo to stimulate growth in the Upstate economy.

The Upstate region is very politically significant in statewide elections. Although the region is 36% of the state population, it has been between 46 and 49% of the statewide vote in the last three gubernatorial elections, 2006, 2010, and 2014. By contrast, New York City has been 27-29% of the vote in these elections despite being 43% of the population. Upstate New York is considered to encompass all of New York except New York City, Long Island, and the City’s northern suburbs, including Westchester, Rockland, and Orange Counties.

The region is also economically significant. Upstate New York’s population is 7 million, larger than 33 states, and is one-third of total employment in the state. My two previous columns on the Upstate New York economy focused on growth during the first six years of Governor Cuomo’s tenure, through 2016, and then a longer view.

The first review last fall showed that Upstate New York employment only grew 3.3% in total overall jobs between 2010 and 2016, compared to 10% growth for New York State as a whole. The comparable numbers for private sector employment growth were 5.8% for Upstate, compared to 13% growth for New York as a whole. The disparity between private sector and total growth relates to cutbacks in state spending when Governor Cuomo first took office in 2011 (the state had a $10 billion budget deficit that year), which resulted in job reductions in both state and local governments. Government reductions stabilized around 2013, but had been substantial by that time.

The second column assessed the context and accuracy of a statement from Governor Cuomo addressing the difficulties posed by helping the Upstate Economy, when he described the Upstate economy as having a “bad 50 years.” My analysis showed that in fact Upstate employment growth outpaced Downstate in the 1980s, despite large manufacturing job losses that captured the public eye. The Upstate region also continued moderate growth in the 1990s after the recession early in that decade. It was really the two national recessions in the 21st century that battered the Upstate New York economy with new rounds of job losses and limited the capacity of the region to recover compared to those earlier decades. Upstate New York actually lost jobs between 2000 and 2010, compared to the recoveries that took place after recessions in the 1980s and 1990s.

As Governor Cuomo’s second term concludes, the Upstate economy is showing moderate improvement in several of its major metropolitan regions, which comprise a majority of the employment base. However, a number of metro regions that encompass the smaller cities continue to struggle. Below are tables breaking down growth in the 12 Upstate metropolitan areas, which comprise five-sixths of the employment base. Non-metro areas make up the rest.

Upstate’s three largest metropolitan regions, the Buffalo-Niagara area, the Rochester area, and the Albany metro area, achieved 9-13% private sector employment growth in the eight years from May 2010 to May 2018. Dutchess-Putnam and Kingston had similar 9% private sector growth over the period, and Ithaca is the fastest-growing metro area Upstate. The six metro areas are nearly 60% of the 3 million job employment base and in these areas private sector jobs have been growing at more than 1% a year -- not as good as Downstate New York or the nation, but sustained improvement.

The next two tables show data for two slow-growth regions, four static/no-growth metro areas, and the third sums up the data for the 12 Upstate metro areas. 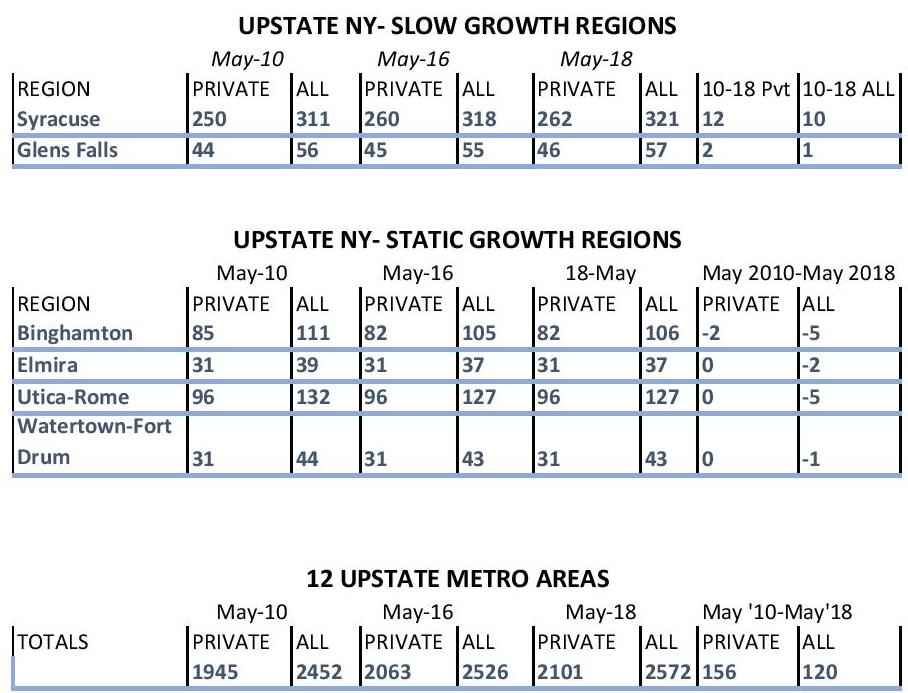 The Syracuse and Glens Falls metro areas were placed in a slow-growth category -- they achieved 4-5% private sector growth over eight years (even slower once the public sector jobs are included). There are four Upstate metro areas -- Binghamton, Elmira, Utica-Rome, and Watertown-Fort Drum -- where no private sector growth is occurring. These four areas are about 10% of the employment base of Upstate New York.

The number of jobs in non-metro areas of Upstate New York is about 500,000, about 16% of the employment base. Consistent data over the eight-year period for non-metro areas is difficult to elicit. Labor Department press releases that include non-metro growth don’t go back past 2015, so the best numbers from that source, from December 2013 to December 2017, showed growth of 4,000 jobs. My best estimation is that non-metro areas are in the slow growth category.

This portrait does not attempt to correlate direct state government investments, frequently in partnership with private companies, to create or preserve jobs, or the general allocation of state government resources, with these trends. The employment numbers are just the general trends -- and Upstate New York’s problems include population loss in some areas, like Central New York and the Southern Tier, where five of the six metro areas with slow or static growth are located. State government can also be making investments in jobs that are worthwhile individually in areas of population loss, but which do not show up in the aggregate data. Over the past seven years state government also embarked upon a broad general policy of making the state economy more competitive by cutting personal income, corporate income, and property taxes.

Empire State Development, state government’s economic development arm, finally produced a comprehensive report on its activities this year (mandated by law), and it does contain much information. Watchdogs criticized it for lacking metrics, meaning measurements of the effectiveness of the state’s investments against some set of standards. The accountability and effectiveness of the state’s resource-allocation remain the subject of another future column.

Governor Cuomo was right to say that helping an economy battered repeatedly by job losses before his tenure began is a major challenge, even if it wasn’t accurate to suggest that there was a 50-year downward path. Efforts to grow the Upstate economy seem to be modestly, but not highly, successful, although state government alone cannot determine economic destiny. How to frame this modest success in an election won’t be easy.