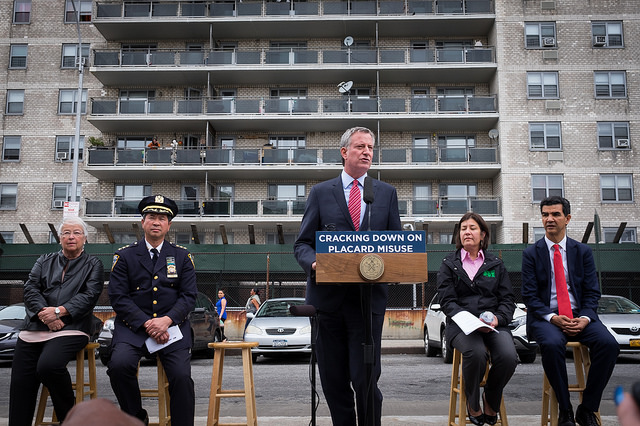 In New York City, the people are betrayed by many conspiring groups. Dishonest drivers get away with breaking laws by displaying parking placards, or “courtesy cards,” or even safety vests and handwritten notes – pretty much anything that demonstrates the right connections to the placard class. The police misuse their “discretion” to operate a favor-trading system they euphemistically refer to as “professional courtesy.” Sham oversight offices and district attorneys participate in the system, too. And the politicians spread placards around and avoid oversight to buy support.

Those who abuse the system may try to rationalize it. They might call it a job perk or a victimless crime. Nonsense. And as the city becomes denser, worsening placard corruption has more impact on safety and quality of life. It impedes emergency responses by congesting streets and sidewalks and by blocking fire hydrants and turning movements at critical locations. It fills loading zones and inflames congestion. It destroys transit service by blocking bus lanes and bus stops. It makes streets unsafe by forcing people on bicycles into traffic and blocking sight lines at intersections. It makes sidewalks uncomfortably narrow and physically destroys them.

It has even seized public park land and entire streets just to provide more free parking for the placard class. It stomps on the rights of people with disabilities who cannot use crosswalks and sidewalks or safely board buses from the curb. And when the police turn a blind eye to illegally parked vehicles, it creates a vulnerability for terrorism. NYPD Counterterrorism knows about the risk of car bombs being overlooked with a placard, but the illicit parking perks consistently prove to be a higher priority than protecting the public.

Placard corruption itself is real criminal misconduct. But we are also concerned that it is often a missed warning flag for much worse criminal activity. Internal Affairs knows, for example, that police placards are attractive for drug smuggling. Failing to maintain discipline also allows the bad apples to remain on the force until they do something heinous, rather than identifying and removing them when a pattern of misconduct emerges.

With our streets already overrun with placard corruption, Mayor de Blasio made the decision last year to hand out an extra 50,000 placards. There was immediate backlash to what appeared to be an effort to buy political support from teachers, and the mayor found himself on the defensive. To save face, he announced a fake crackdown on placard corruption.

On May 24, 2017, he stood at a press conference in the Bronx with the NYPD at his side to announce the city’s new zero tolerance policy. It was empty rhetoric. There was never any real enforcement.

Even before the press conference, it seemed clear the administration was not really serious. The previous week, the mayor's press secretary responded to one of our tweets of a traffic enforcement agent refusing to write a ticket to a vehicle with an illegal license plate cover because there was a NYPD placard on the dashboard by saying: "you tweet at me an awful lot. I read almost none of them. But from what I gather, you'll care about an event we do next week in the BX."

The "crackdown" was designed from the start to minimize any real impact. It added more staff at taxpayer expense, but did not require the tens of thousands of existing officers and enforcement agents who aggressively blanket every part of the city in a half-billion dollars in tickets every year to simply provide honest enforcement. But the lack of real enforcement turned out to be even worse than we expected.

Over the course of an entire year, a grand total of 89 vehicles were towed, according to testimony at a City Council oversight hearing (which we believe included plenty of perjury by top NYPD officials). That was with new towing capacity and 100 additional enforcement agents that we are all paying for. Eighty-nine vehicles using placards to park illegally in ‘No Standing’ zones could be towed out of Battery Park City and the Financial District in a single afternoon.

Ticketing also remains elusive. We see cars parked illegally with placards all the time, and when we check their summons history with @howsmydrivingny, far too often the only tickets ever issued came from automated cameras. There is no mystery why placard perp Senator Marty Golden and his friends in the police officers union fought so hard to have safety cameras disabled (before Golden reversed course amid an unsuccessful reelection bid firestorm).

At one point, the Department of Investigations put on a good show. They rounded up a bunch of nobodies that had forged fake placards and perp walked them for the news cameras. After making headlines, their effort stopped. Meanwhile, DOI continued letting drivers with NYPD placards (including some real placards that were used fraudulently) to park illegally in front of DOI’s office. Some DOI employees continued using their own placards to get away with breaking the law, too. One particular DOI staffer was eventually forced to remove his illegal license plate cover after repeat complaints, but he never got a ticket and he is still using his placard to park illegally around City Hall.

Our twitter account has crowdsourced a tremendous amount of evidence, yet the District Attorneys pretend to know nothing. Why? Perhaps to avoid upsetting police officers, whose testimony DAs rely on; perhaps because prosecuting police officers would risk cases built on testimony from those officers. Perhaps because some of the DA’s own staff are perpetrators. After all, we routinely see DA placards on illegally parked cars, including some registered out of state that look suspiciously like insurance fraud.

Some of the perpetrators of placard corruption have fought back against accountability. They do not just close 311 complaints with false statements (a crime worse than the misconduct they are covering up), sometimes they use the contact information to harass citizens who ask for safe streets. The NYPD has resorted to unconstitutional censorship on Twitter, and it illegally withholds information in response to Freedom of Information requests. To resort to such tactics, they must feel very invested in the benefits and power their corruption provides them.

But power belongs to the people, and it is up to New Yorkers to finally put an end to the corruption by those we pay to serve our city and expect to lead it ethically. Let your precinct and elected politicians know that you are not willing to accept their corruption anymore.

***
The authors are members of the @placardabuse team.