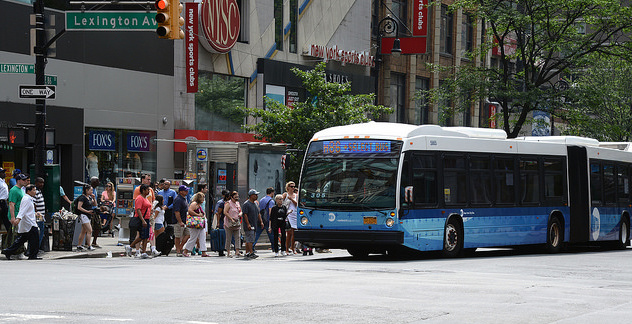 The first two parts of this series discussed the causes for bus ridership decline, the Fast Forward plan as it relates to buses and why its focus needs to be changed to reverse this decline, a plan that worked: the southwest Brooklyn changes, and MTA studies that did not achieve their desired results. Read part 1 and part 2. This third and final part discusses Brooklyn bus route changes needed now and larger conclusions about bus planning that should inform redesigns to come.

1. Routes need to be straightened so that a direct north-south bus route serves Maimonides Medical Center.

2. Service on 16th Avenue discontinued in 2010 needs to be restored using better routings serving additional areas so that it does not merely duplicate a nearby route with better service.

3. Improved east-west access is needed across Bensonhurst and Marine Park and Gerritsen Beach.

4. New shopping centers have been built in Spring Creek and in Canarsie that remain largely inaccessible by public transit. A 20-minute car trip from southern Brooklyn to Spring Creek should not take between 90 minutes and two hours by bus.

6. Several new routes are needed to serve JFK Airport for employees as well as visitors. A single route from Bedford Stuyvesant is grossly inadequate and converting it to SBS is not a solution.

7. Improved access is needed between Sheepshead Bay and the Rockaways, also a 20-minute trip by car, but up to a two-hour trip by bus.

8. The B44 SBS should have a branch to Kingsborough Community College when school is in session, operating non-stop from Avenue X.

9. Routing problems also exist in northern Brooklyn, but to a lesser extent. One example is the service gap caused by the elimination of the B71 on Union Street in 2010; residents and elected officials have been asking for its return in an extended fashion to also serve lower Manhattan, with no response from the MTA.

Most of these changes are described in greater detail on my website. All the proposals there with the exception of the B83 extension were rejected by the MTA in 2004, but are now under reconsideration. The fare also needs to be addressed to completely eliminate double fares by changing to a time-based fare instead of vehicle-based fare as described here.

None of these improvements will happen with the MTA's bus redesign plan unless the MTA starts thinking about its customers as people, not merely regarding them as numbers, and is less focused on operating costs.

1. The MTA must care more about its passengers and stop penny pinching. Service for the recent Staten Island express bus redesign, which went into effect this past summer was inadequately planned, leaving hundreds of riders stranded without enough buses and has been called a disaster by commuters. The MTA, in its concern to keep operating costs low, underestimated demand in terms of scheduling and spans of service. It has been tweaking the new system to satisfy numerous complaints.

2. Reducing operating costs by eliminating bus stops and so-called duplicative routes must not be the highest priority. Nearby routes are often serving different destinations and are not duplicative at all, but only appear so if your analysis is limited to studying a bus route map.

3. Efficiency must be increased, for example, by better integration of New York City Transit and the MTA Bus Company so that each company can use each other’s depots reducing the number of deadhead or non-revenue service miles and centralizing administrative functions such as planning and scheduling. Presently, the MTA regards non-revenue miles as more productive than miles where passengers are carried, rather than as wasted mileage. That is because service levels are planned assuming all buses run on time; labor cost savings can be achieved when partial trips to and from the depot are made without passengers and in less time. Wasteful scheduling practices whereby buses can travel up to ten miles while not in service must end.

4. Increased efficiency must not be at the expense of the passenger, like when eliminating bus stops on a massive scale. Bus stops should only be removed on a case-by-case basis, not by increasing the walking standard so that it will be necessary for some to walk up to three-quarters of a mile to or from a bus.

5. Planning should not be done by only considering able-bodied riders on good weather days. Increased walking to and from bus stops is especially burdensome on the elderly, handicapped, those with temporary health issues, and those with packages or strollers whose needs must also be considered.

6. Passengers want buses that are not overcrowded so they can board the first bus that arrives. They also want buses to arrive on time. Increasing reliability was passengers’ number one concern 40 years ago, as it is today.

7. Cooperation is needed among all relevant agencies. The MTA cannot continue to claim reliability is solely caused by traffic conditions, which is out of its control because traffic is the responsibility of DOT. What was the point of putting DOT’s commissioner on the MTA board if the two agencies will not work cooperatively? The city claimed it was not involved in the MTA’s recent decision to halt the introduction of new SBS routes until 2021. As long as the NYPD, charged with keeping bus lanes clear, continues to block the lanes with its own vehicles, and as long as the MTA bus schedules do not reflect realistic running times, and each agency blames another one, with little cooperation, reliability will not improve.

8. The emphasis must be on reducing total trip time for passengers, which is a greater passenger concern than increasing bus speeds or time spent on the bus; impacts on other traffic should not be ignored. Connections must be made easier, and routes straightened where possible.

9. Investments must be made in additional service within budget constraints, to reduce service gaps and improve passenger convenience. Shuttle routes at 30-minute scheduled intervals should not be the wave of the future in developing areas.

10. Service planning should not be designed only for existing customers. Total demand including those who use services such as Uber because the routing system is inconvenient and unreliable must be considered. If the MTA continues to assume that increased service will not result in increased ridership and revenue, and that only operating costs matter, ridership will continue to decline.

After 40 years, it is time to reflect on those 1978 southwest Brooklyn bus route changes, so the same type of successful changes that converted low-usage routes into highly-patronized routes can be duplicated. Simply providing straighter wider-spaced bus routes with fewer stops with little concern for serving destinations that are presently difficult to reach will not reverse the decline in bus ridership. Byford claims the bus route redesign will be customer driven. Let's hold him to his word. “Community consultation” does not mean that the community is merely informed of MTA changes they may not want.