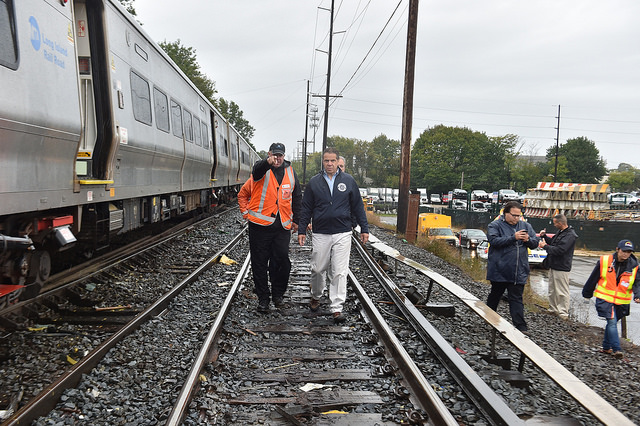 This fall Governor Cuomo signed a campaign pledge with Long Island State Senate Democratic candidates, many of whom won their elections, to make New York City bear greater responsibility for the subway and bus system’s capital needs. The campaign pledge was the continuation of a long-standing demand by the governor that New York City contribute more toward the enormous costs of the MTA capital budget. He even suggested in his budget proposal that the city take full financial responsibility for the MTA New York City Transit capital plan, but it was not accepted by the Legislature at the time of budget adoption in April 2018.

The political candidates from Long Island who signed that pledge may not have realized that today the Long Island Rail Road is the most heavily subsidized operation of the three transit systems, including New York City Transit and Metro North.

These excerpts from the new MTA budget, adopted in December, show that LIRR riders pay the lowest share of the respective operating budgets of the three systems. Called the FareBox Operating Ratio, the table shows the percentage of each system’s costs paid for by the fare and other basic operating revenue, like advertising. The data come from the MTA Dec. 2018 Adopted Budget, p. 1-7, Vol.2.

The data show the LIRR farebox will contribute 43.4% of the LIRR’s operating costs in 2019 and declines to about 38% by 2022. New York City Transit’s fare provides 51.1% in 2019 and about 47% in 2022. Metro North riders contribute a higher share than either system. The costs do not include debt service, which must be paid, of course, or an item like depreciation, for which there is no out-of-pocket cash charge but still measures wear and tear on the original costs of putting assets in service. The MTA also provides the FareBox Recovery Ratio, which shows theses fare revenue and cost figures.

Is there a dollar figure that can be put on the LIRR’s higher loss ratio, compared to the other MTA systems? I have made an estimate that adds debt service to operating expenses.

FAREBOX AND OTHER OPERATING REVENUES

Then one can compare the percentage of system revenue contributions with the total deficits each part of the system experiences. The deficits have to be made up from taxes and other subsidies.

This analysis shows that the Long Island Rail Road’s deficit is $1.345 billion a year and is more than 18% of the MTA’s total deficit, although its fare and other operating revenue provide about 12% of the MTA’s total revenue. The difference -- 12% vs. 18% -- amounts to an under-contribution by the Long Island Rail Road from the fare of $448 million a year that has to be made up by taxes and subsidies. New York City Transit is about 71% of the system’s total deficit. If one measured NYCT’s percentage of contributing revenue, compared to the percentage of the deficit, NYCT fares are over-contributing $312 million a year more than the taxes and subsidies needed to make up the deficit.

New York City Transit’s deficit, $5.2 billion, is numerically far larger than the deficits of the other two systems, but that is not really an issue because the New York City economy is the main generator of the taxes and subsidies within the region that are used to make up the deficits.

The money to make up the system deficits comes overwhelmingly from a group of taxes enacted by the state Legislature levied on the metropolitan region but not Upstate New York. Begun in the early 1980s and continued into the 21st century, the regional taxes include a payroll tax, a surcharge on corporate profits, a sliver of the sales tax, the mortgage recording tax, and a New York City stand-alone commercial real property transfer tax. The commuter rail systems and New York City Transit split about $590 million in surpluses from the bridge and tunnel tolls about 60%-40% for the suburban systems pursuant to an early ‘70s formula. The state, city, and county governments contribute small amounts from their general funds.

About 75% of the wages paid within the region go to persons employed in New York City, according to 2017 data from the state Labor Department, and that compensation forms the base of the payroll tax. A Rockefeller Institute of Government estimate of business profits surcharges from 2009 data showed nearly 78% of taxes from business profits in the region came from the city (and the city is a larger share of the regional economy today than nine years ago). This surcharge is the second largest dedicated regional tax contributor for the system.

One large dedicated tax to the MTA is the city’s commercial real property transfer tax, which provides a sum of more than $600 million a year for New York City Transit. Looking at where these streams of revenue come from leaves little doubt that taxes collected within the city cover New York City Transit’s farebox deficits and, must, by logical extension, cover some of the Long Island Rail Road’s deficits too.

The governor justifies his demands that the city cover more system cost by citing a 1953 law that created the New York City Transit Authority and required the city cover its capital costs. With cost estimates of the MTA’s next capital plan, and New York City Transit President Andy Byford’s Fast Forward Plan, reaching $40-$60 billion, who should pay is a very important question. But the answer already exists.

As the transit system deteriorated during the New York City-State financial crisis of the ‘70s, Governor Carey and the Legislature devised a solution to the problem of the city’s obligation to cover the NYCT capital costs. That solution was the set of dedicated taxes just listed above, the enactment of which began in 1981-82.

Since the city only has the power to increase the property tax and has many basic governmental obligations already (schools, police, social welfare), the city would have needed the Legislature to approve a group of special new taxes to cover the transit system’s costs at that time. The Legislature just required the region’s residents and businesses to do indirectly -- pay new taxes going to the MTA -- that which the city and the other local governments would have had to do directly -- levy new taxes -- for the same purpose. If the city was forced to contribute billions in new revenue to the transit system it would need to get permission from the Legislature for new taxes now, just as it would have had to do nearly 40 years ago. Otherwise funding for the basics like schools, cops, sheltering the homeless, etc., could be seriously impaired.

The net effect of the regional taxes was that New York City residents and businesses continued financial responsibility for the system anyway since most of the taxes collected came from the city. The taxes from the suburbs contribute to the commuter rail system, except the Long Island Rail Road’s riders don’t cover a proper share of that system’s costs and get subsidized by taxes collected from the remainder of the region.