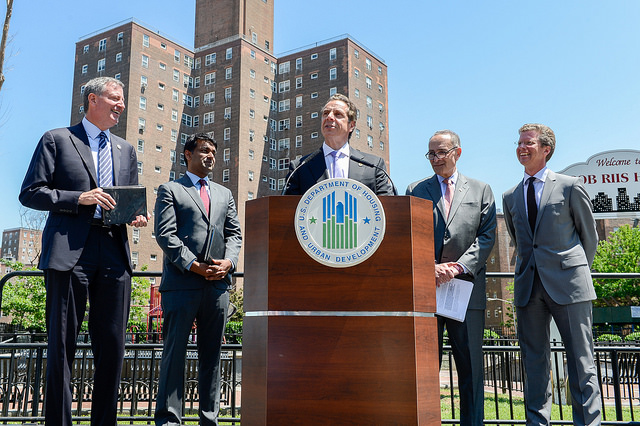 Right now, New York City’s government should be taking advantage of the Democratic majority in both houses of the New York State Legislature to make progress addressing the affordable housing and homelessness crisis affecting city residents. But success requires a skillful effort since the political challenge is daunting, despite overwhelming public concern.

Why now? We have a new Democratic majority in the state Senate elected in 2018. The state Assembly, controlled by Democrats since 1975, has been a liberal body limited by Republican power virtually the entire time, until now.

But there is no immediate consensus on what the housing solutions might be, how much money might be available, whether the new Senate Democrats would be willing to vote for a new tax, even if just levied in New York City, or the extent to which the Cuomo administration is willing to spend more money. The population in need is large and diverse, and the resources to address any particular segment of the needy population are severely limited.

What’s the city been doing up until now? City government has made major investments in affordable housing and used its resources to stabilize evictions and step up emergency assistance -- to prevent the crisis from getting worse. But there is little let-up in a cycle of rapid growth, gentrification, and development, rising rents and prices, and the inability of large segments of the city’s population to afford higher rents on limited incomes as low rent apartments have grown scarce.

Housing data show us exactly where New York City stands. The dimensions of the housing crisis are staggering:

-There are more than 2 million rental apartments in the City of New York, with about 1 million in the private rent-stabilized or controlled system, according to Housing NYC 2018, the annual Rent Guidelines Board report. Median household incomes in rent-stabilized apartments are about $45,000 a year in 2016, and median rent stabilized rents were $1,270 in 2017.

-There are 61,000 persons in the shelter system right now, not counting people living on the street (DHS Daily Report).

-Only about 18% of rental households live in a subsidized situation, like NYCHA, Section 8, or the Mitchell-Lama program, which has privately-owned but regulated units with low-cost financing and tax abatements to make them affordable (NYU Furman Center, 2017, Changes in NYC Housing Stock).

-About 19% of New York City residents, or 1.7 million people, lives in poverty.

The federal government added to the crisis by curtailing new subsidized housing in the 1980s and ‘90s.

But, by 1994, New York City became governed for 20 years by Mayors Giuliani and Bloomberg, for whom low-income housing was not a major priority. The shelter population was 24,000 in 1993, 28,000 in 2001, and 49,000 in 2013, the end of Mayor Bloomberg’s tenure. Mayor Bloomberg developed a program called Advantage to help residents exit the shelter system, which had a two-year cap on a voucher-like subsidy to encourage recipient families to become independent. The cap was criticized for its lack of permanency and the state eliminated its share of the cost in 2011, whereupon the mayor refused to pick up the state share and the program lapsed.

State Senate Republicans, in power during Mayor de Blasio’s tenure up until now, were not interested in proposals from the mayor like the “mansion tax,” a surcharge on real property transfers above $2 million, with the new money dedicated to housing vouchers for the elderly. Aside from the universal pre-kindergarten victory in his first year, the city has spent much of its political energy in Albany trying to limit damage to the city budget from proposals by the Cuomo administration to shift social service, higher education, Medicaid, criminal justice, and transportation costs from the state to the city, winning on some issues but losing others, rather than obtaining major new resources from the state for housing.

There are a few programs in place right now that attempt, with varied levels of success, to help ease the housing crisis:

Supportive Housing: Since the 1990s, both the state and city have committed more resources to supportive housing, which assists persons with serious addiction or mental illness, the frail elderly, and others, and recently have embarked on new programs in this area. The state has committed to 6,000 more units of supportive housing over five years (not all of which will be in New York City), starting around 2016, and the city has made a commitment to 15/15, meaning 15,000 more supportive housing units over the next 15 years, beginning around 2016. But these units will be available not just to persons with psychiatric disabilities in the shelter system, but to persons leaving psychiatric hospitals, prisons and jails, adult homes, or just coming from their own homes and families but diagnosed with severe illnesses. There are 16,000 single adults in the shelter system now. 21,000 single adults entered the shelter system in Fiscal Year 2018, while fewer than 9,000 exited in that year (DHS Management Report, FY18). The capacity of new supportive housing units to rapidly absorb single adults from the shelter system is limited.

Affordable Housing: The large city affordable housing program, now called Housing New York 2.0, initiated by the de Blasio administration in 2014, has created or preserved 122,000 units since inception; the full plan calls for 300,00 units by 2026; 39,000 of the 122,000 units are new construction; the remainder preservation. Preserved units are also vital to long-term affordability because owners are agreeing to retain their building in regulated status in exchange for low-cost financing for repairs and large percentages of their residents are low- and moderate-income.

The new units are created through capital grants and low-cost financing to private developers to reduce the cost of construction, allowing some units to be marketed to low- and moderate-income tenants. Other units are rented at market rates and are not counted in the affordable classifications. Some projects are 100% affordable, meaning they have heavier subsidies and are not offered to higher-income households. Affordability relates to income levels; more than 50% of the affordable units have been slated for households making between $47,000 and $75,000 a year for a family of three. About 25% of the units have been slated for incomes below $47,000 a year.

But there is concern that not enough of the units are for very low-income households. A change for lower-income households would, however, require more subsidies, assuming the number-of-units goal remains the same. Without more money overall, the city would have to forsake some moderate-income units for lower-income units. Nonetheless the city has made a major commitment to getting more housing units built, in addition to the resources to reduce homelessness. The State of New York produces some affordable housing through its own programs, or sometimes in combination with city programs, but the scale of the state’s effort does not match the city’s.

There are several other significant proposals to address the affordable housing crisis that do require state involvement:

-Comptroller Scott Stringer proposed to change property transfer taxes to raise more revenue and concentrate the capital grant subsidies of the Housing New York program to the low-income population and the homeless.

The mortgage recording tax in the city would be eliminated while the real property transfer tax would become more progressive. The change would raise $400 million a year and the funds used to provide deeper subsides to help the city’s neediest population. But planned Housing New York units for the moderate-income group between $47,000 and $75,000 a year, and those above that level, would be switched over to the lower-income group and thus be displaced.

A modification to the Stringer proposal might be to use the $400 million a year as a targeted add-on for the lower-income population, rather than a substitution away from the moderate-income group. After all, both groups, the moderate-income, and the very low-income, need housing. Mayor de Blasio’s proposal, the Mansion Tax, and the comptroller’s plan both require a tax increase. But can the mayor persuade some of these new suburban Senate Democrats to agree to a tax increase for a housing purpose, when they are also being asked by the governor to support congestion pricing?

-Assemblymember Andrew Hevesi’s legislative proposal, named Home Stability Support, creates a Section 8-like voucher for the shelter population, as well as the at-risk of eviction population, funded at 14,000 vouchers a year. Cost estimates have ranged from $450 million a year to close to $1 billion a year (Renewed Push for Homeless Subsidy, Gotham Gazette, Dec. 2017). An effort by the Assembly and Senate last year in budget negotiations to fund even a start-up at $15 million a year was rejected by the governor’s Division of the Budget.

The Mansion Tax, the Hevesi proposal, the cancelled Advantage program, and current city emergency rehousing assistance efforts, which cost $200 million a year (NYC OMB, Mayor’s Message, 2018), all involve Section 8-like vouchers concept to help residents pay for rental apartments. New vouchers are very expensive. Section 8 usually pays a landlord up to $1,500 a month, or $18,000 a year, to cover one household. Each new 1,000 vouchers thus cost up to a new $18 million a year. Who should get the priority for new vouchers? The homeless? The elderly? The 148,000 households who are on the current Section 8 waiting lists, who have also been vetted as in need?

Some serious coalition building is in order to make progress. Gaining a political consensus about where to put new funds, and where the money will come from, means Mayor de Blasio must pull together support among housing advocates, the Assembly and the Senate, and run the gauntlet of Governor Cuomo and the state Division of the Budget. Is there sufficient political will to address this intractable problem?