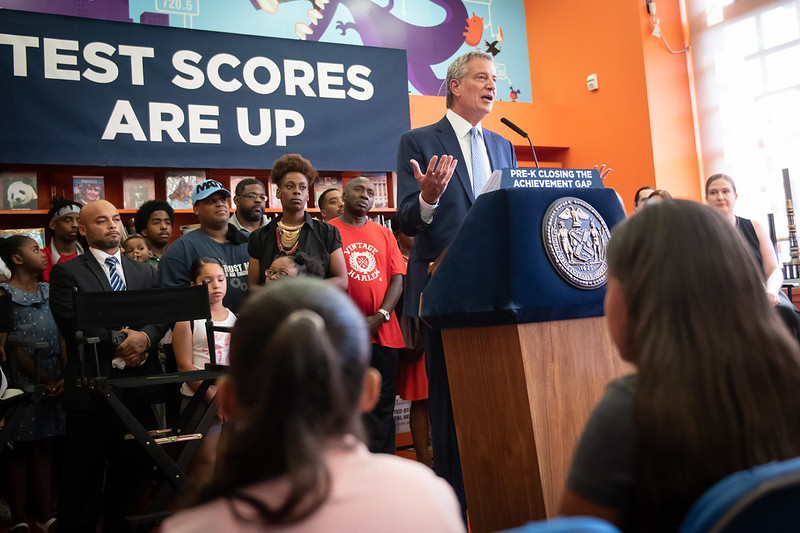 The students in the New York City public schools are doing better -- so much so that the improvements offer Mayor Bill de Blasio a real opportunity for a legacy. The mayor still has two more years to go and two more budgets to invest in kids.

Mayor de Blasio and Schools Chancellor Richard Carranza announced in November that a record number of New York City students, nearly 49,000, or 62% of those entering 9th grade in 2014 (the Class of 2018), entered college or postsecondary education. There were nearly 75,000 students in entering 9th grade in the fall of 2014 and a record percentage of them -- 76% (57,000 students) -- graduated on time, meaning by August 2018.

The system also experienced its lowest dropout rate of about 7.5% (5,600 students). At the close of the fourth year, more than 11,000 students, roughly 15% of the initial class, were still in school.

The 2019 graduation results should be released very soon. Graduation outcomes under the mayor’s tenure will continue through three more years, into spring 2022.

When the state English language arts (ELA) and math exam scores were released for the grade 3-8 tests given this spring, it was also announced that New York City students had effectively matched the scores of the students in the rest of the state. City students slightly outperformed their peers in the rest of the state on the ELA tests, and slightly underperformed them on the math tests. The State Education Department changed the content of the tests (again), so the scores are only comparable to 2018, and no further back. The context of the tests has also changed (see below for more on this).

Mayor de Blasio’s signature program, universal full-day prekindergarten, also reached a milestone: the first large group of entering four-year-olds in fall 2014 took their third-grade ELA and math tests in the spring of 2019. The initial results were positive: 53% of third-graders were proficient in English and math, the highest percentages of students in the testing grades of 3-8, and the disparities for black and Hispanic students compared to white students, for those who were in the full-day pre-K, versus those who were not, narrowed significantly.

There’s hope the pre-K results will improve, because there were 53,000 students in pre-K in its first expansion year (entering fall 2014), and nearly 70,000 students in its second year. That means 17,000 more students served by full-day pre-K will be taking the third-grade tests this coming spring, in 2020, compared to 2019.

I don’t offer these numbers to ignore the many issues, problems, and concerns about the school system. Graduation rates for black and Hispanic males are 66% and 65%, respectively, significantly below the 76% system average, meaning more hard work to help them is required. There is also criticism that many high schools and middle schools screen out students with below average grades or test scores, a practice that reinforces racial segregation in the schools and limits opportunities for students of color. The practice extends far beyond the issue of the one test for the specialized high schools like Stuyvesant. The de Blasio administration has allowed diversity pilots for some schools to improve equity. A founder of the small schools movement, Clara Hemphill, along with others, wrote about how to reform these practices.

The issue of test scores in the school system has many ramifications, among them their basic limitation in measuring student ability, or their significance to helping students be successful in school.

The State Education Department’s frequent changes in the content of the tests has made measurement of improvement over time difficult. However, use of the test scores as punitive, to label and close schools, or fire principals and teachers, has faded in the face of a public backlash against aggressive misuse of the test scores for those purposes. The fact that New York City students are matching their peers in the rest of the state in test scores stands for what it is: improvement in the city schools.

The mayor and the chancellor said 51% of the class of 2018 graduated college ready, affirmed as an improvement, but that did mean 49% were not college-ready. College-readiness is a measure of whether or not students might need to take remedial education in college before entry to college-level courses. And there is a problem: not enough city students entering college are finishing. In fact, according to the Center for an Urban Future, only 22% of CUNY’s community college students finish within three years, and only 55% of the students in the four-year colleges finish within six years. The Center, which has been studying this issue for a long time, urged the new CUNY Chancellor to make major efforts to improve student retention and graduation.

Mayor de Blasio also initiated and funded a massive expansion of after-school programs for middle and elementary school students, nearly doubling the number of middle-school youth being served, to 71,000 in 2014. The 2019 city budget reports 100,000 middle-school youth are served by either the Department of Education or the Department of Youth and Community Development.

It would be unfair not to mention Mayor Michael Bloomberg. After all, he was mayor for 12 years, and in his first year the state Legislature transferred control of the school system to the mayor, a policy Mayor de Blasio staunchly supported. Many of Mayor Bloomberg’s school policies were deeply controversial, especially the punitive use of test scores, but there was broad support for the creation of many new small high schools to offer better environments for the more than 300,000 high school students in the city. There are now more than 400 high schools in the city. The drive to originate smaller high schools began far earlier than Mayor Bloomberg’s tenure, but his administration went all out on this policy.

The improvements were made as the Regents and the State Education Department increased standards for graduating high school, requiring higher passing grades on English and math and other subjects in the Regents Exams. Smaller high schools could only be a part of this successful picture; sustained educational effort from pre-K through grade 12 by teachers, administrators, parents, and students is how the success was achieved.

It should also be noted that universal pre-kindergarten has its own unique history independent of Mayor de Blasio. The massive expansion to near universal full-day is his achievement. But the state government began universal half-day prekindergarten in the 1997-1998 state budget in a deal between then-Governor George Pataki, a Republican, and the Democratic Assembly led by then Speaker Sheldon Silver, who championed the concept (and later helped secure state funding for de Blasio’s expansion).

Why is the program before Mayor de Blasio significant? Because it was already immense when Bill de Blasio became mayor. There were 60,000 children in pre-K before de Blasio’s start, with about 40,000 of them getting a half-day rather than full. In the mayor’s first year he added about 33,000 full-day seats, with a large conversion of half-day programs to full-day programs, and by 2015 there were 70,000 children in full-day.

The healthy economy has enabled the mayor to invest heavily in the school system. From the 2014-15 budget to the one enacted for 2019-2020, the city committed nearly an extra $6 billion in funding to the schools, while the state added $2.5 billion and the federal government a paltry $470 million. These funds have increased teacher compensation, improved school facilities and built new schools, added 50,000 seats in the charter schools (mandated by the state; the charters are now about 11% of city enrollment), as well as the many programs mentioned above.

Mayor de Blasio and his first schools chancellor, Carmen Fariña, have a right to be proud of improving excellence and equity in education. The mayor and his new chancellor, Mr. Carranza, should keep up the focus on and commitment to serving children. A strong legacy awaits if they keep it up.