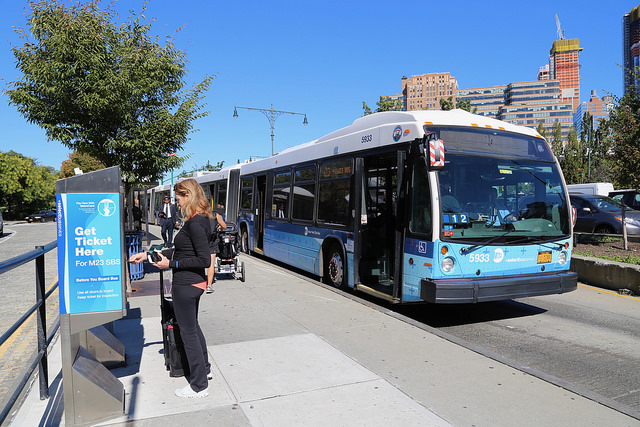 This is part one of a three-part series

Could they all possibly be wrong? Yes.

The Promises and The Reality
Supporters consider SBS to be a panacea for many of New York City’s bus problems. Whenever asked how the city is improving bus service, the response most often is that more SBS routes are being created. Yet SBS has not solved the problems that it promised to solve, such as stemming the loss of ridership, making buses more reliable, or significantly shortening passenger trip times.

A report from city Comptroller Scott Stringer, “The Other Transit Crisis: How to Improve the NYC Bus System,” highlights dozens of problems with local buses that SBS does not address or does not significantly reduce. Some of the problems mentioned are: buses are slow, ridership is declining, and service is unreliable. Yet SBS does not significantly improve bus speeds or reliability. Nor has it increased ridership in many cases.

Transit Signal Priority (TSP) for buses, promised a decade ago, extends a green light for buses approaching an intersection or shortens a red light to speed buses. It is a promised feature for SBS, but according to the comptroller it is in effect on only five of the 326 bus routes and at only 260 intersections. (The routes are the B46, BX41, the S79, and the southern portions of the M15 and B44.)

The unproven premise by DOT and the MTA is that SBS is a major improvement. The comptroller shows with data that the improvements have been marginal at best.

The Difference Between Bus Travel Time and Passenger Travel Time
SBS supporters confuse bus travel time with passenger travel time. They are different. SBS buses save time primarily because of fewer bus stops and exclusive lanes, if honored. In some cases, it is not because passengers pay their fares before boarding. The 86th Street bus saves only about two minutes, as shown in Figure 2 of the progress report for the entire crosstown trip because of passengers pre-paying their fares. The passenger saves even less time.

The need to pre-pay your fare increases the likelihood of missing a bus and waiting up to an additional 20 minutes for one. That could double your travel time. Conversion of many SBS routes to the longer 60-foot articulated buses further increases wait times. Typically, four articulated buses replace five standard 40-foot buses. Articulated buses seat 60 passengers each, 50 percent more than standard buses. However, when compared to buses of the 1950s that seated 53 and PCC trolleys that also seated about 60, are they that much of an improvement?

The Eagle Team is in charge of fare enforcement on SBS routes. If the Eagle Team enters the bus to check SBS receipts, the bus is held for five minutes rather than proceeding with the check while the bus is in motion, delaying the bus five minutes. This could easily wipe out the time you saved using SBS. Also, completing your trip on a subway or another bus(es) is a component of passenger travel time but not included in the SBS bus travel time statistic. A savings in passenger travel time, the time it takes to complete your entire journey, is the real indicator of SBS improvement for passengers. No statistics for this are available.

Who Benefits from and Who is Hurt by SBS?
Passengers making bus trips exceeding five miles do save significant time, perhaps up to 20 minutes. However, the average local/limited/SBS trip is only 2.3 miles. Therefore, for the vast majority of bus passengers the three to five minutes they save on the bus is spent walking extra to and from the wider spaced bus stops which could be considered as a service cutback. Is that an improvement, especially during bad weather when someone would prefer to ride than walk?

Additional walking is especially inconvenient for the elderly, handicapped, infirm, and those lugging gear. Separate SBS and local bus stops are also inconvenient. This requires passengers to cross the street if they just want to take the first bus that comes.

Some passengers even have longer trip times due to SBS because some former limited riders have switched to the local rather than walk up to three-quarters of a mile to reach an SBS bus stop. Others would have to pay an extra fare for SBS where it or the local does not cover the entire route if a third bus is required. The B44 and B46 are examples.

It was the city’s policy for over 50 years that no new service or service cutback should result in additional fares. This policy has not been strictly adhered to since MetroCard was instituted and the MTA eliminated numerous multiple-bus transfers that were instituted as a result of trolley and elevated cutbacks. When additional free transfers are created, they are not publicized anywhere, so you just have to know where they exist.

The MTA benefits with shortened bus trip times, but it still costs more to operate SBS routes because of the enforcement element, and if 60-foot buses are used, labor and fuel costs are higher. The current labor agreement provides premium pay for operators of articulated buses.

The negative effects of SBS on other traffic are ignored, dismissed, or attributed to other factors in the MTA SBS progress reports, which are only released to the public once for each route. Traffic on avenues parallel to Nostrand Avenue were shown to have increased when exclusive lanes were installed there (see pages 32 and 33 of the Progress Report.)

On Woodhaven Boulevard, the traffic increases were most apparent after exclusive bus lanes were introduced. A DOT report showed that traffic increased by 38 percent on one portion of the roadway if one did the arithmetic. The data was removed from DOT’s website after it was made aware of that.

Increased traffic means more congestion, generating greater air pollution with long-term health consequences and costs, slower trips for non-bus users, increases in trucking costs, which are passed on to the consumer, as well as other negative effects, such as impeding emergency services. None of this has been estimated or measured because there have been no environmental impact statements.

A transit improvement means that more benefit from a change than are harmed by it. Proper traffic analyses conducted by licensed professional traffic engineers should be undertaken and the economic impacts on businesses need to be studied. But according to the MTA’s SBS FAQ’s, everyone benefits.

How the Mayor, MTA and DOT Mislead
Let's review the claims made by Mayor de Blasio late last year when he announced 21 new routes over the next ten years. He touted reduced travel time and increased bus reliability with SBS, but confused bus travel time savings with passenger travel time savings. The comptroller’s data showed only marginal improvements to bus travel times and bus speeds, as already explained.

The mayor stated local buses are notoriously slow and unreliable. True, but examine the average speeds on some of the SBS crosstown routes: M34/34A: 4.6/4.4 MPH; M86: 5.0 MPH. Even the M15 with its exclusive bus lanes has an average speed of only 6.5 MPH, not exactly fast, when you consider bikes average about 9 MPH.

The MTA and DOT are using BRT successes in other cities and countries to justify SBS here, which really isn’t true BRT. They confuse and oversell by using the terms interchangeably. They selectively use data and manipulate statistics to give false and misleading impressions.

Faulty methodology is used to claim about a 95 percent satisfaction for SBS passengers. Survey results for local riders who are dissatisfied with SBS are hidden. DOT claimed that B44 local passengers were never surveyed after SBS was instituted. A first year B46 SBS Progress Report was not issued although service began in July 2016. Ridership declined on that route by 400,000 annual riders in 2016, the year it was implemented. Statistics for 2017 are not yet available.

In the MTA's world, a rating of six out of ten, or 60 percent, from all passengers would translate into a 100 percent customer satisfaction rating.

DOT and the MTA are also very careful with language using statements such as all buses are equipped for TSP and it will be in effect, omitting it is in effect only at a miniscule percentage of intersections where bus routes operate and has been promised for a decade, as Comptroller Stringer stated.

They use percentages to their advantage rather than actual numbers. For example, they promise “up to a 30 percent travel time savings.” That may translate into an actual savings of only three or four minutes for an average passenger making a typical 45-minute trip.

Potential is stressed over reality in discussing SBS advantages. They state that a bus can carry 80 passengers while a car often carries one, or mention motorists potentially switching from cars to buses. They do not state how many actually did switch or how often the bus is nearly empty.

The mayor spoke only about DOT's annual SBS budget of $9.4 million. He conveniently neglected to mention the MTA and federal contributions. Each SBS route costs the MTA between $2 million and $5 million per year extra to operate according to MTA Staff Summary requests. That's $40 million per year the mayor is omitting.

Fifty million dollars per year over ten years is $500 million. Twenty-one promised new routes add another $500 million for the MTA and $130 million for DOT. That's $1.13 billion over ten years just for increased operating costs, if all routes were operating on day one. Then there are the initial construction costs where the numbers conflict. Sometimes the cost of acquiring new buses is included and other times it is not or the federal portion is omitted. Costs for a short crosstown route are cited for as little as $6 million, with longer routes costing as much as $40 million. If we assume an average construction cost of only $25 million, 36 corridors would cost $920 million.

DOT estimated that the construction cost alone for the BRT full treatment for Woodhaven Boulevard would cost between $200 and $300 million. If $40 million was already spent, what could possibly be accomplished by spending more than an additional $200 million? That was never explained.

Constructing and operating 36 SBS bus corridors over a ten-year period would cost over $2 billion, without accounting for inflation. That is not “low cost.”

This is part one of a three-part series. Part two discusses the denigration of local bus service, problems with enforcement, other SBS problems, negative effects on traffic and local businesses, inadequate public participation, and why SBS is not a cure all.