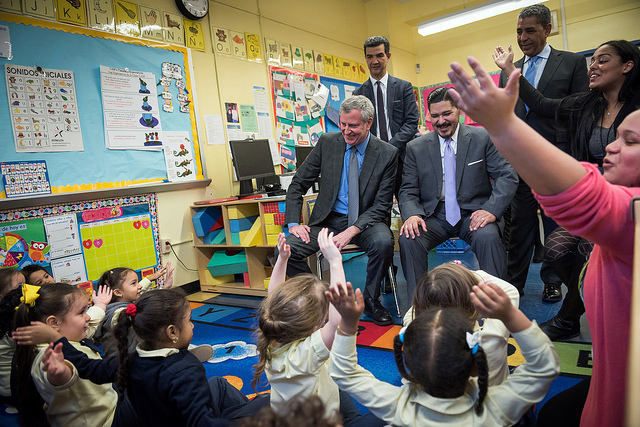 Latino Americans now number close to 60 million and a significant share of the 18 million children therein have persistent achievement shortcomings. Unfortunately, Latinos are seen primarily through the lens of competing immigration narratives.

Each of these narratives has some truth but neither looks seriously at the academic obstacles Latino youth face.

Latino-white fourth-grade achievement gaps are substantial. Latino children are twice as likely as white children to be below basic achievement levels and less than half as likely to attain the proficiency level or better. Moreover, these gaps are unchanged as children age and some studies find that it is just as large for second- and third-generation Latino children.

There are a host of factors that influence this achievement gap. One is the impact of illegal immigration. Piecing together two data sources (here and here), I estimate that among Mexican- and Central-American U.S. immigrants, 45 percent of children are either undocumented or citizens but living in a household with at least one undocumented family member; and they represented 34 percent of all Latino children in the country.

Given these mixed family situations, threats of deportation influence the Latino-white achievement gap. Researchers estimate that Latino school attendance declines by 10 percent when Immigration and Customs Enforcement (ICE) has partnerships with local police, and these declines are concentrated among elementary school students. This may explain the high chronic absentee rates of elementary school children in the Bronx.

By contrast, as a result of President Obama’s DACA program, high school graduation rates increased by 15 percent and college attendance by 25 percent.

Undocumented parents are also in some instances less able to advocate for their children’s educational needs. Given the problems with the traditional public schools in many poor communities, black parents successfully shift their children to the charter school sector to a much greater degree than Latino parents. Whereas there are 78 percent more Latino than black students in New York City public schools, there are 40 percent more black than Latino students in its charter schools. This and other similar issues may explain why children with undocumented parents score lower on assessment exams that those with authorized parents, even after controlling for a number of variables; and children gained more than one year of schooling when their parents were able to obtained legal status.

There are of course other factors that influence the achievement gap. In 2017, the Latino poverty rate was 16 percent, double the white rate and only slightly below the black rate. In addition, English language deficiencies hinder educational achievement. An additional explanation is that despite their own limited economic circumstances, many Latinos focus on giving aid to their more impoverished family members in their home countries.

As a result, remittances from the U.S. to Mexico and Central America dwarf those to other countries. In 2016, they were at record levels. This focus puts added pressure on Latino youth, particularly boys, to gain employment as soon as possible, constraining educational attainment.

In 2017, among those 25 and older, only 19.8 percent of Latino men compared to 43.2 percent of white men had at least an associate degree. Not surprisingly, the average hourly wage of Latino men was 32.5 percent below white men’s wage rate. Economic Policy Institute researchers Maria Mora and Alberto Davila reported that including adjustments for differences in educational attainment and age, the wage gap declined to 14.9 percent. This remaining gap is virtually eliminated if we then adjust for lower Latino academic test scores that are linked to weaker schools attended and low-earning occupations entered.

What can be done? Certainly we should seriously consider legalizing undocumented parents of citizen children.

In addition, providing more occupational programs may be effective in responding to the employment goals of young men in Latino communities. As Kenneth Adams, the director of workforce development at Bronx Community College has documented, given the high failure rate in Bronx community college academic programs, this may be an effective strategy.

We must move efforts to reduce the Latino-white achievement gap to the forefront of policy discussions regardless of any fear that it would strengthen anti-immigrant forces.