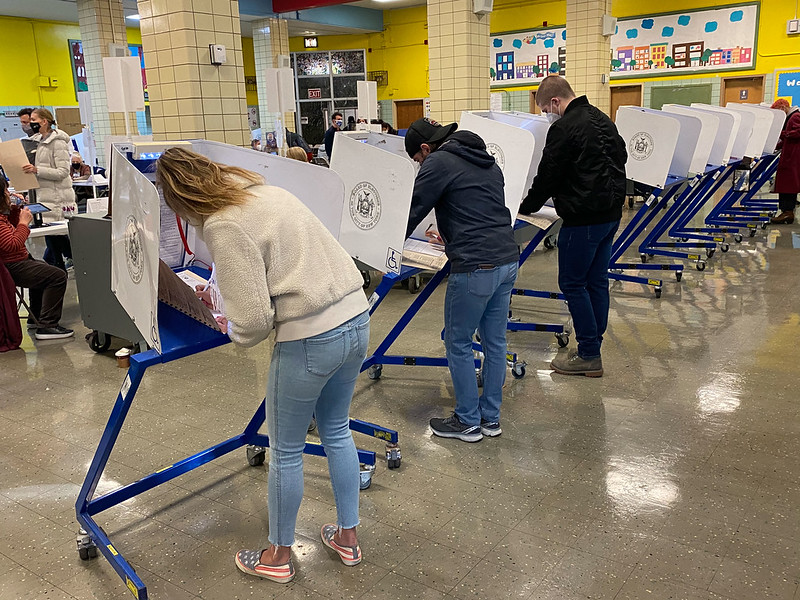 As New York City implements ranked-choice voting for the first time and prepares for its widespread use this year in special and party primary elections for city government positions, experts and politicians have been weighing in.

The city’s first ranked-choice election -- a special election in City Council District 24 in Queens -- just wrapped up voting on Tuesday, February 2, and other special elections will take place in the weeks ahead in Queens and the Bronx, voters, candidates, campaigns, the Board of Elections, and other government entities are all working to prepare New Yorkers to use the new system and understand how it works, including the counting process and how much time it may take for full results

City & State NY hosted a virtual event, “NY’s Path to Ranked Choice Voting: Queens Forum,” on January 28, where a pair of candidates in the 2021 mayoral election, current elected officials, and civic engagement experts discussed the new voting system, its pros and cons. It was moderated by NY1’s Cheryl Wills.

Citizens Union held a “Ranked-Choice Voting Civic Conversation” on February 1 over Zoom, to explain how ranked-choice voting works, the potential benefits and pitfalls, and what has to happen in order for the new election system to be implemented successfully. This event featured three experts and advocates and was moderated by Gotham Gazette’s Ben Max.

How It Works
Ranked-choice voting allows voters in special and party primary elections for city government positions to select up to five candidates, rather than just one, in order of preference. It applies to positions of Mayor, Comptroller, Public Advocate, Borough President, and City Council -- all of which are on the ballot this year.

As explained at both of the events, people can choose to vote for only one candidate, by selecting them as their first choice and not ranking any others, though this would effectively be the same as discarding the potential for four chances to vote, depending on how the results unfold.

If a voter selects the same candidate for all five ranks, it is the equivalent of voting for them only once as their first choice, New York City Campaign Finance Board Assistant Executive Director for Public Affairs Eric Friedman said at the City & State event.

If one candidate receives at least 50% plus one of the first-place votes -- a majority -- they are declared the winner of the election, and there is no need to examine voters’ rankings.

However, if no candidate reaches the majority threshold, the ranking system comes into play. The candidate with the least first-place votes gets eliminated, and their votes get redistributed to each of their voters’ second choice.

The process continues until there are only two candidates left, by which point there will have to be one candidate with a majority of the vote.

The candidate with the most first-choice votes may not win the election, though in most cases that candidate does. The system is meant to eliminate costly and low-turnout runoff elections that have been in place for citywide positions, to ensure that winners have shown a broad base of support by getting ranked not only first but also second and third by many voters, to encourage candidates to campaign both positively and widely, appealing to as many voters as possible.

If a voter makes a mistake on their ballot or doesn’t understand the system before mismarking their choice, Friedman explained that they are able to make up for it up to two more times. In total, a person will have three chances to vote correctly: each person is allowed a second ballot if they inform a poll worker that they messed up on their original one, then they are allowed to fix their ballot one more time if the scanner detects a problem.

As a fail safe, the ballot scanners are supposed to be able to catch if a ballot isn’t filled out properly. Once the machine notices this, it is supposed to spit the ballot back out so that the voter can correct their errors on a new ballot. All of this highlights the importance of well-trained poll-site workers and supervisors, and good protocols in place from the Board of Elections, as well as the voter education piece, which is being run by the New York City Campaign Finance Board, with a great deal of support from community and civic groups, among others.

While other cities that have adopted the ranked choice-voting system use a computer software to count and distribute votes, the New York City Board of Elections has yet to finalize the software to do this job — which means the first ranked-choice voting election in the city is being counted by hand, if needed (after the initial tally of ballots, former City Council Member James Gennaro had a commanding lead that may mean there is no examination of the candidate rankings).

“It does seriously make you wonder what everybody was doing between the time the voters passed this and now, because there are established software companies out there that know very much what they’re doing, so we’ll continue to ask this question,” WNYC Editor-in-Chief Audrey Cooper said at the Citizens Union event.

A Variety of Perspectives
The ranked-choice voting system was implemented after 73.5% of voters elected to pass the proposal back in 2019, when a charter revision commission had put it on the ballot.

Before its implementation this year, some elected officials and advocates tried to stop its use with a lawsuit, since dismissed, arguing that voters would not be properly educated in order to use the system and thus risk disenfranchisement. Despite the fact that it is now actively being implemented, not everyone is fully on board.

For example, at the City & State event, State Assembly Member Alicia Hyndman, a Queens Democrat, said that she supports ranked-choice voting, but not necessarily for right now.

With the coronavirus pandemic preventing door-knocking, in-person gatherings, and other traditional ways to spread word of the new system and its details, Hyndman said that she feels it is not the best time to start implementing ranked-choice voting.

“I just think that this needs to be delayed, because we’re talking about enfranchising voters,” she said at the Spectrum event. “I think that this is disenfranchising people because it’s too much information. I’m not saying people can’t grasp the information — I have a very well-informed community that will get the information — but there’s a huge percentage of people who are not going to get this and who will go there, be confused and guess who they’re going to blame? They’re going to say, ‘The politicians are changing things again and they’re trying to take away my right.’ I’m telling you, this is what is going to be said. So, as much as we can, we’ll educate, but I’m concerned that this is just too much, too fast, and that this is not going to achieve the desired effect.”

Hyndman was not the only speaker at the two events who voiced concerns, though the potential benefits were more widely discussed.

The most common concern that was brought up was about education. If not enough is done to educate the public on how this new system works, it could lead to invalidated ballots, votes not accurately reflecting people’s intended choice, voters not making more than one selection and therefore not having any votes beyond their first choice counted, and some people just choosing not to vote altogether.

This concern is especially acute regarding communities that are already underserved, like low-income neighborhoods and communities of color, places that often receive the least outreach and resources.

“The big concern right now is that the communities that were hit hardest by COVID, and there’s always a common denominator, communities that are disinvested in, are we really reaching them,” recently-elected Queens Borough President Donovan Richards said at the City & State event. “And I think during this period the challenge is — and once again, I am a firm supporter of ranked-choice — how are you reaching those folks.”

However, as one expert pointed out, there isn’t much point to debating ranked-choice voting, it’s happening.

“I think we’ve seen with this most recent election what can happen when candidates or their surrogates negatively poison the field,” said Lurie Daniel Favors, the Interim Executive Director of the Center for Law and Social Justice at Medgar Evers College, CUNY, at the Citizens Union event. “I think it’s really important that now that it’s here — we’re no longer in 2019 — despite how we might feel about it, this is the system that is in place and it is important that people who are currently in positions of power use their voice to encourage people to learn more about this system, as opposed to using their voice to continually decry what they think may be the negative side of the matter.”

Mayoral candidate Kathryn Garcia, who was at the Spectrum event, said, “Ranked-choice allows a diversity of candidates, and it means that whoever wins will have been voted on by a majority of New Yorkers. And it helps to ensure that we don’t split and have a spoiler candidate in the race. And for the candidates themselves, I hope that it means that we are all running positive policy-issued races.”

She went on to say that she sees no potential drawbacks to ranked-choice voting.

Rose Pierre-Louis, the Chief Operating Officer of New York University’s McSilver Institute for Poverty Policy and Research and a leader of the Committee for Ranked-Choice Voting NYC, expressed her optimism about the implementation of RCV.

“I’m extremely excited about ranked-choice voting for the very reason, as I said in the beginning, I think it levels the playing field,” she said. “You often hear from someone who says, ‘I’d love to run for office, I think I have something to offer,’ but then talks about the politics and not being a player in that space, and often being discouraged from running. I think now you’re seeing a diversity of candidates — if you look at CD24, it’s an incredible array of diversity in these races and at a time when we’re looking at issues of racial diversity and gender diversity, for example in the city council and in government, period. I think we’re seeing a great number of people who are considering running for office, simply because of ranked-choice voting.”

[Watch the video of the Citizens Union-hosted event here]