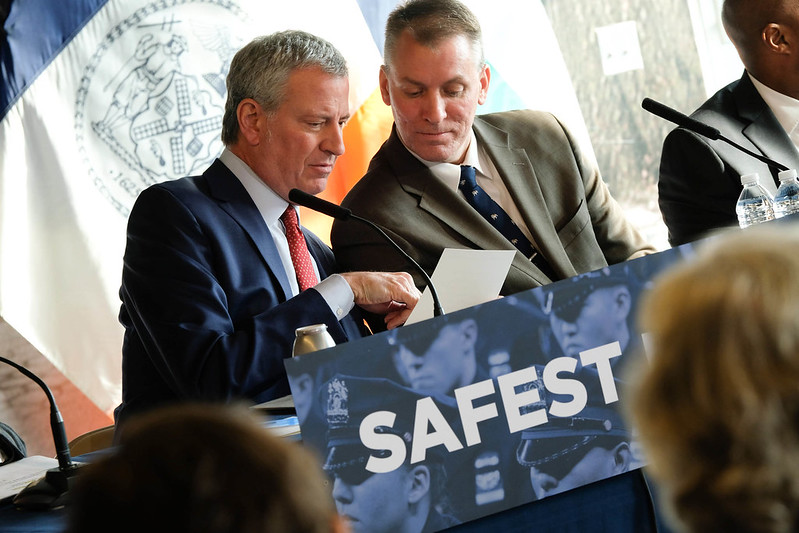 Update, March 5, 2021: Shortly after the publication of this story and after having declined to comment for the story over multiple days, the de Blasio administration on Friday released the first of a three-part draft plan with 36 proposals. "The plan will now move through a public comment period where it will undergo further revision based on the feedback of the public and through a process with the council," according to the official press release. The 36 proposals are broken down into five categories: "Transparency and Accountability to the People of New York City;" "Community Representation and Partnership;" "Recognition and Continual Examination of Historical and Modern-Day Racialized Policing in New York City;" "The Decriminalization of Poverty;" and "A Diverse, Resilient, and Supportive NYPD." They include efforts already underway, like improving accountability in police discipline and partnering with gun-violence interrupter groups, and new proposals like consolidating NYPD oversight under an expanded Civilian Complaint Review Board.

Update, March 8, 2021: In a statement emailed to Gotham Gazette Monday, Speaker Corey Johnson said the City Council would continue to push its police reform proposals as lawmakers review the de Blasio administration's draft plan. "The Council will continue to work on passing our package of bills that will move our city forward as we reimagine public safety. We will review the administration's draft plan, but we hope and expect the administration to work with us as we finalize our legislation," Johnson wrote.

With less than a month left, the de Blasio administration has yet to produce a full-fledged police reform agenda in line with a gubernatorial order, leaving a narrowing window to secure state funding, which the city is at risk of losing if it doesn't pass a package that satisfies the state's requirements by April 1. The order, dubbed the "New York State Reform and Reinvention Collaborative," requires the city to issue a prospective reform plan, solici t extensive feedback during a public comment period, and get City Council approval by the April start of the state fiscal year.

The city had already missed a January start for public comment suggested in state guidance. The mayor has repeatedly stressed past and ongoing police reform efforts, like a recently-adopted "disciplinary matrix," and reassured reporters multiple times that the city would meet the state deadline.

In January, de Blasio administration officials said a final report would be issued in February and would be ready for Council approval "on or before April 1." The Mayor's Office has disclosed little about the timeline in over a month since. De Blasio is now facing renewed pressure from the governor, who made veiled references to the city's position in recent remarks where he again raised the specter of funding cuts, calling public safety "a foundation" to reopening the economy.

"Cities are doing fantastic work and creative work, but not all of them are doing it. If they don't do it and we get to the budget then there are going to be significant sanctions on the city," Cuomo said during a press briefing at the State Capitol Wednesday.

"Please, you have 29 days, I know it's a hard topic, I know people would rather stay away from it, but public safety is one of the top priorities for any mayor," he said. In fiscal year 2020, the state contributed $82 million to the NYPD's $6 billion budget. Cuomo has not said exactly how much is on the line.

The Mayor's Office did not respond to requests for comment on the status of the collaborative on Wednesday and Thursday.

As the city fails to produce a report, leaders in the City Council are positioning the body to usurp the mayor's roll by passing its own policing and criminal justice package, leveraging the additional pressure from Cuomo's executive order.

"The Council has introduced and heard a package of bills that would reimagine public safety in New York City, as mandated by the Governor," said Speaker Corey Johnson in a statement to Gotham Gazette Thursday. "We urge the de Blasio administration to work with us on passing these important bills into law by the April 1 deadline."

The Council's package, introduced at the end of January, includes 11 bills and 1 resolution ranging from changing the NYPD's role in schools, mental health, and traffic calls, to making the police commissioner a Council-confirmed position and ending qualified immunity for police officers. The resolution calls on the State Legislature and governor to give the Civilian Complaint Review Board (CCRB) final say in disciplinary matters it adjudicates, which would establish a disciplinary authority independent of the NYPD.

"New Yorkers continue to see examples of substantiated misconduct that ultimately resulted in little to no penalty from the NYPD," said CCRB chair Frederick Davie in testimony before the City Council in February. The CCRB supported the resolution as "a concrete step in increasing accountability and public trust," Davie said.

De Blasio's reform collaborative is being led by First Deputy Mayor Dean Fuleihan with input from the Law Department, NYPD, and Mayor's Office of Criminal Justice. Last fall during a series of NYPD "listening sessions" with the public, Jennifer Jones Austin of the Federation of Protestant Welfare Agencies, Wes Moore of Robin Hood, and Arva Rice of the New York Urban League, joined the collaborative as civil society partners. It is not clear if anything was produced from the 9 listening sessions or any other meetings that were held.

In October, the Mayor's Office said the city would be starting its next phase of "intensive community engagement" to develop new reforms on top of several enacted by the city since the George Floyd protests last summer, when Cuomo's executive order went into effect.

“We have come so far to fundamentally reform policing in our city,” de Blasio said in an October 29 press release announcing the launch of the collaborative's next phase. “Still, there is clearly more work to be done to strengthen bonds between officers and the communities they serve. Together, we will rebuild a fairer city that addresses injustice and disparity in a lasting and meaningful way.”

According to Johnson, the Council has been kept in the dark about City Hall's progress on the reform collaborative.

"We have no idea when the administration's criminal justice reform plan is coming out and the Council is deeply concerned and frustrated with the lack of progress from the Administration on this issue," Johnson said in his statement to Thursday. "The Council is obligated to hold a hearing and vote on a plan that incorporates feedback from the public. The Administration’s delay here is wholly unacceptable."