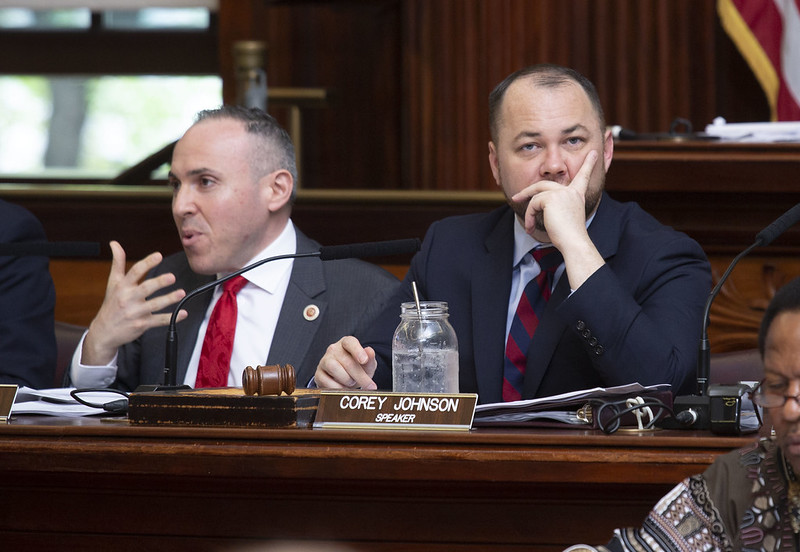 UPDATE: On Saturday August 21, following the publication of this article on the evening of Thursday August 19, the City Council scheduled an oversight hearing by the education committee on the city's school reopening plans for Wednesday September 1. The hearing will come less than two weeks before the first official day of school for more than 900,000 public school students on Monday September 13. The article below has been updated slightly with some new information, but mostly appears in its original form as published on the evening of August 19.

As of August 19, the New York City Council has not held an oversight hearing on the Department of Education's summer programming or school reopening plans, though both have at times sparked controversy and criticism, including from the lawmakers chairing the relevant Council committees.

The City Council committees on education, youth services, and health have not held oversight hearings -- where officials from the mayor’s administration testify and answer questions about their policies and decisions -- since before the city budget was being negotiated in May. Since then, Mayor Bill de Blasio and Department of Education (DOE) officials have announced a myriad of policies for the city's ambitious Summer Rising enrichment program and the far more complicated plan to fully reopen schools this fall to all students.

“The chairs of both the Youth Services and Education Committees requested and received multiple briefings from DOE and DYCD [Department of Youth and Community Development] on Summer Rising and the Academic Recovery Plan in June and July, and were able to ask questions and lay out concerns," wrote Jennifer Fermino, a spokesperson for City Council Speaker Corey Johnson, in an email earlier this week. "They were productive briefings and changes based on our feedback were made, including allowing families to choose their regular school site for the program."

"In addition, there has been constant communication with schools, CBO partners, DYCD and the DOE to discuss any and all issues that have arisen," Fermino wrote. "We have been planning an education hearing to discuss school reopening. It will be held soon but the exact date is TBD."

Numerous questions remain about how the Department of Education is preparing for the return of roughly 900,000 students next month after a year and a half of chaotic and disjointed learning brought on by the pandemic. The department must make provisions for the physical layout of schools -- ensuring social distancing, air quality, and more -- the covid vaccine, testing, and masking policies, and the academic support needed to make up for months of lost or limited education. Other efforts are focused on providing counseling for students amid so much loss from the deadly pandemic and its socio-economic fallout.

De Blasio and Schools Chancellor Meisha Porter have announced vaccine-or-testing mandates for teachers but have not laid out a comprehensive quarantine and testing procedure for students. The city is purchasing air purifiers for every classroom, a massive undertaking requiring the fast spending of tens of millions of taxpayer dollars, and has put another $18 million to reduce class sizes in 72 schools.

There are also questions about the quality of special education and "related services" -- like occupational therapy or transportation -- which have been criticized throughout the pandemic and led to a four-year lawsuit in the Bronx that the city settled with disability rights advocates earlier this month.

Lawmakers like Council Member Mark Treyger, who chairs the Committee on Education, have not been shy about raising concerns over the city's back-to-school rollout in press conferences and on social media. But Treyger’s committee has held no oversight hearing, events that can spur action from the mayoral administration, bring to light new information, provide an opportunity for testimony from other stakeholders, inform the legislative process, and produce other potentially helpful outcomes. He said on Thursday Augsut 19 that he wants to soon hold a hearing, which are scheduled at the discretion of the Council Speaker in concert with committee chairs.

In a separate phone interview on Saturday, after the original publication of this article on Thursday evening, Treyger said his committee had previously asked de Blasio administration officials, including top health officials, for their availability in August through September 1, but was asked by the administration to wait until late September to hold a hearing, which he felt was "not acceptable." Treyger credited Gotham Gazette's reporting with what he said was helping to push Department of Education officials to participate but he noted the Council still had not confirmed whether health department representatives would attend the September 1 hearing.

In July, Treyger appeared with United Federation of Teachers President Michael Mulgrew at a press conference outside of City Hall to call for the mayor to reduce class sizes and crowding. Treyger has sponsored legislation to ensure a minimum physical space per student to be implemented over the next three years. It dovetailed with another cause of the committee chair, which is to get the DOE to adopt a remote learning option for students for the imminent school year, for those who may be immunocompromised or in need of quarantine because of the virus, among other reasons.

"To date there still really is no plan" for remote instruction, Treyger told Gotham Gazette over the phone Thursday.

De Blasio has so far rejected those calls.

"We found that our kids were safest in school. We have the gold standard of health and safety measures," de Blasio said at a press briefing earlier that day in response to a reporter's question about developing a remote curriculum.

"I am absolutely convinced that with all the health and safety measures put in place," the mayor said. "A lot more vaccination...is going to happen between now and the opening day of school, with kids and with adults in the school system. This is going to be the place that the kids need to be. It's also the place they need to be for a whole lot of other reasons, including other physical health and mental health reasons."

People 12 years old and up are currently eligible for the covid vaccines. The city has been enhancing efforts to get students vaccinated before the start of the school year, while hoping that federal approval for kids 5-12 years old comes sometime this fall. The mayor has also indicated he is talking with the United Federation of Teachers about vaccine requirements for teachers.

Experts say the Council's oversight hearings are one of the sharpest tools to hold the administration accountable and ensure decisionmaking isn't taking place unchecked behind closed doors.

"It's understandable but not excusable that hearings have been displaced by the summer and by the primary elections but the mayor and the DOE need to be on their toes," said David Bloomfield, an education professor at Brooklyn College and the CUNY Graduate Center, "particularly explaining to the public through the vehicle of City Council hearings that they are well prepared for the fall opening."

On calls for a remote learning option, "that requires a deep-dive and debate that is essentially only taking place through unilateral statements rather than through give and take," Bloomfield added, referring to some of the exchanges that happen at Council hearings.

The education committee and the youth services committee, chaired by Council Member Debi Rose, had an oversight hearing scheduled in late June but it was "deferred" and never rescheduled. It was intended to examine the city's Summer Rising program and the "Fall 2021 Student Academic Achievement Plan." That would have given lawmakers a chance to raise issues with and induce answers from administration officials.

According to Fermino, the Council spokesperson, the June hearing had to be postponed because of scheduling conflicts with the fiscal year 2022 city budget agreement between the mayor and Council. It was also to accommodate the provider organizations running much of the summer programming in partnership with the DOE who, according to Fermino, were tied up in planning and implementation.

"We look forward to continuing to conduct oversight on Summer Rising’s successes and shortcomings, and to apply lessons learned to DOE’s approach to academic recovery, social emotional supports, and [community-based organization] partnerships in the regular school year," Fermino wrote in an email.

To Bloomfield, who has testified at many Council hearings himself, it's understandable to try to accommodate providers' scheduling needs "but to have them absent from oversight is a disservice to the public."

"I'm concerned about the accountability of not-for-profits using public money and needing to be held publicly accountable for both the highs and lows of their service," he said. "It seems to me that they're no more insulated from public accountability than the mayor's office and the DOE."

In a Thursday August 19 phone interview with Gotham Gazette, Treyger claimed the hearing could not be rescheduled so far because leaders in the Mayor's Office and DOE were not prepared to answer his committee's questions -- though scheduling and holding hearings is entirely at the discretion of the City Council and calling an oversight hearing often compels the relevant administration entities to prepare.

"We want to have a hearing ASAP and we're planning for one as soon as possible,” Treyger said. “The issue is availability of senior administration officials to not just be present but to actually answer questions and to give folks information. Because I don't think it's productive just to have folks sit in a room and hear, 'I'll get back to you' or 'I don't know,' when parents and everyone need answers at this time."

Rose, the youth services chair, did not respond to a request for comment.

“Leaders of the Department regularly meet with the Council formally and informally," wrote Nathaniel Styer, a DOE spokesperson, in response to Treyger's statements. "We look forward to attending the next hearing.” Styer noted scheduling oversight hearings is a decision made by the Council and that moving or cancelling hearings is not uncommon.

Given health protocols involved, an oversight hearing on school reopening could be held jointly by the Council education and health committees.

The Council's Committee on Health, chaired by Council Member Mark Levine, has not held an oversight of the city's vaccine rollout -- a key component of de Blasio's back-to-school plan -- in over six months. Levine, like Treyger, has also been critical of elements of the city's plans, including related to school reopening.

According to a spokesperson for Levine, who recently won a competitive primary for Manhattan borough president, the health committee is planning on holding several covid-related oversight hearings in the fall, though the details of the subject matter and dates are still uncertain.

Note: after the publication of this article, the City Council scheduled an oversight hearing on the New York City school reopening for September 1, less than two weeks before the first day of school for students on September 13. The article has been updated to reflect new information.