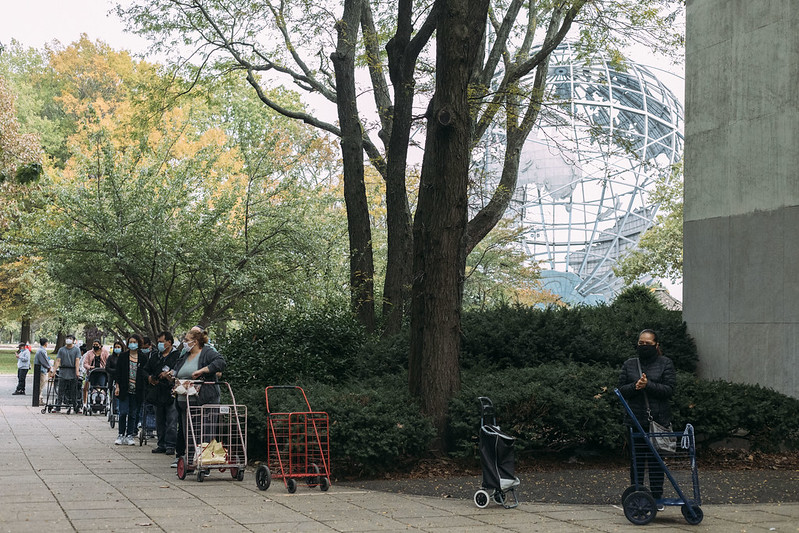 Newly-released survey data confirms lower-income New Yorkers were far more worried about the long-term effects of the pandemic and its economic fallout than their moderate- and higher-income counterparts after the pandemic's first and most devastating peak last spring.

According to a study conducted by Community Service Society -- a nonprofit advocating for disadvantaged New Yorkers -- in collaboration with Lake Research Partners, New Yorkers in the lowest income tiers were most concerned with how they would rebound from the virus, the sunken economy, and housing instability, even as the first covid wave was receding. Educational losses were another focus. At the bottom of the list of concerns were both law and order and institutional racism.

The data, collected in over 1,600 interviews between July and August 2020, highlights the precarious position of poor and underserved New Yorkers relying on the social safety net. CSS and Lake are now releasing the latest batch of findings in a report previewed by Gotham Gazette. Previously released results showed over half of Black, Latino, and immigrant respondents had not received unemployment insurance or federal Pandemic Unemployment Assistance at the time of the survey.

The instability was even more pronounced among families with children. Sixty-percent of low-income respondents raising kids lost their jobs either temporarily or permanently, compared to 44% of middle- or higher-income residents. The experience compounded both economic instability and inequities.

The newly-released data also shows that, at the time, most New Yorkers across income levels were unlikely to consider permanently leaving the city due to the pandemic or economic factors, with roughly three-quarters unlikely to move. Nevertheless, young and Latino residents, and families with children, said they were more likely to move out permanently, at a rate of 31-36% of those respondents.

The study's authors say the findings upend certain narratives that have dominated the pandemic era -- among them that wealthy New Yorkers would flee the city under lockdown, and that crime was a top concern in low-income communities.

"The concept of public safety was such an issue during this most recent mayoral [primary] campaign and not enough attention was paid to issues that low-income New Yorkers had cared about and were exacerbated by the pandemic," said Irene Lew, a policy analyst at Community Service Society and the author of the report.

Lew believes politicians like Brooklyn Borough President Eric Adams, the Democratic nominee for mayor, also need to "move forward" from the rhetoric of a wealth flight. "Eric Adams still continues to make this point that the rich are going to leave New York but we're not actually seeing that in the [survey] data," she said. (Adams is expected to win the general election based on the city's high ratio of registered Democrats to Republicans.)

To Lew, the fact that 32% respondents under age 35 said they were likely to permanently leave the city meant officials should be focused on bolstering industries where that population is more likely to work. Those include retail, hospitality, and entertainment. Community Service Society also recommends expanding paid internships for high school students, something many candidates, including Adams, discussed on the campaign trail.

"We need to focus on making sure they feel like the city is working for them," Lew said of the younger generations.

At the peak of the pandemic in May 2020, the city's unemployment rate reached a staggering 20%. By July 2021, that rate had fallen to 10.5% -- nearly three times pre-pandemic levels -- according to the latest data from the Bureau of Labor Statistics.

Titled "Unheard Third," the annual survey is meant to shed light on the third of voting-age New Yorkers that earn the least and are often neglected by elected officials. It broke respondents down into five income categories based on household income for a family of four. They ranged from families earning at or below $26,000 a year to families making over $105,000 annually.

The survey showed that the lowest earners had a more pessimistic view about the pandemic's impact on their family's income and child's education than moderate- or high-wage earners. Seventy-four percent of low-income respondents felt the pandemic would lead to a "long-lasting setback" in income, compared to 52% of middle- and high-income participants. Sixty-nine percent felt the same about their child's education, compared to 61% of the upper-income tiers.

Housing and the risk of homelessness was another major concern for New Yorkers. That anxiety has likely been exacerbated lately by uncertainty around the state’s eviction moratorium (which lawmakers recently extended to January) and as the state has struggled to disburse emergency rental assistance.

Advocates and their champions in the state Legislature say the city should focus on converting vacant and distressed properties into affordable housing, which was recently made possible by state law. "This is probably the fastest way to create permanently affordable units," Lew said. One alternative -- rezoning to allow for denser housing, including affordable units as required by law -- requires going through the city's lengthy land use process and facing pushback from opponents of development.

Expanding right-to-counsel for tenants facing eviction is another measure that can mitigate housing anxiety, CSS argued in the report. Increasing funding for the Fare Fairs program of discounted Metrocards could also alleviate pressure on low-income households and make jobs more accessible.

Compared to higher-income earners, New Yorkers facing housing insecurity "are just really concerned about the long-term impacts of this pandemic on their family's future in this city," Lew said.