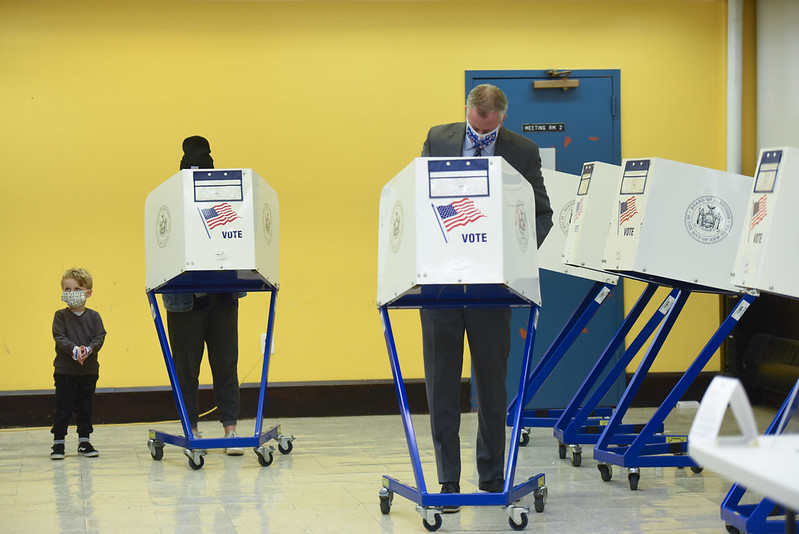 Voter turnout in the 2021 New York City general election was slightly lower than the already-depressed 2017 and 2013 elections.

Every four years, all of city government is on the ballot, including Mayor, other citywide offices, borough president positions, and the entire 51-seat City Council. This election was the first time since 2013 that most of those positions, including Mayor, were open due to term limits.

This year, just under 20% of the 5.6 million registered New York City voters cast ballots in the mayoral election among Democrat Eric Adams, Republican Curtis Sliwa, and other candidates. In 2013, when Mayor Bill de Blasio, a Democrat, faced-off against Republican Joe Lhota and others for the open seat, turnout was roughly 24%. In 2017, when de Blasio defended his mayoralty against Republican Nicole Malliotakis, turnout was about 23%.

Roughly 1.1 million city residents appear to have voted this fall. That includes about 79,000 absentee voters as of Thursday afternoon, with more ballots still coming in and to be counted as long as they were postmarked on or before Election Day. Of the over 1 million in-person voters, about 170,000 people voted during the nine-day in-person early voting period October 23-31.

In raw numbers, about 65,000 fewer voters cast ballots this year than the last mayoral election in 2017. And this year saw about 1,000 fewer voters than in 2013, the last election with no incumbent mayor. But since 2013, about 1 million more voters were added to the city rolls, meaning a far smaller portion of potential voters decided to have their voices heard.

The figures are based on unofficial election night results provided by the New York City Board of Elections and voter registration data from the State Board of Elections. The analysis factors in the roughly 79,000 uncounted absentee ballots and assumes none were superseded by an in-person ballot cast from the same voters, which is allowed under city and state rules.

Some observers have said the low numbers are indicative of the uncompetitive nature of most general elections in a city heavily dominated by Democrats, but they are not dissimilar to turnout in the highly-competitive primaries and are part of a downward trend over decades. That trend has continued in municipal elections despite much higher turnout for presidential races and, over the last few years, expanded access to the ballot through the advent of early voting and other voting reforms.

As of election night, Eric Adams, the Brooklyn Borough President, had received about 676,000 votes, or 66% of the in-person tally, according to the city board's unofficial results. Sliwa, a conservative talk radio host and founder of the Guardian Angels, garnered 293,000 votes, or 29% of the in-person total. The results will be updated and certified in the coming weeks once absentee and affidavit ballots are counted. Adams' margin is expected to grow given that the absentee ballots skew heavily toward Democrats.

Of in-person voting, Adams' margin of victory, roughly 380,000 votes, is narrower than de Blasio's win over Malliotakis in 2017 -- a 440,000-vote difference -- and his 2013 showing over Lhota -- won by a stunning 530,000 votes. Per the City Board of Elections, Democratic voters returned about 66,000 absentee ballots and Republicans about 6,000. Though not every Democrat will vote for Adams and not every Republican will vote for Sliwa, they will likely track closely and could expand Adams' margin to roughly 440,000.

The competitive Democratic primary in June saw 25% of registered party members go to the polls. By raw numbers, that primary saw about 266,000 more ballots than total votes for Adams in the general election, indicating a Democratic dropoff between the spring and the fall (not including the roughly 79,000 uncounted absentee votes, which are likely to skew heavily towards Adams).

That drop-off may speak to how many saw the general election as a foregone conclusion across the mayoral race and so many others, while there were also far more candidates across the city running active, competitive campaigns in the primaries. Eight Democratic mayoral candidates received and spent millions in public matching funds in the primary, for example, while there were also highly competitive Democratic primaries for Comptroller, several borough presidencies, Manhattan District Attorney, and dozens of City Council seats.

There are also just over 1 million party-unaffiliated, or "independent," registered voters in the city, significantly outnumbering registered Republicans. Sliwa, a "Never Trumper" who has had a difficult relationship with many Republican leaders, got close to 9,000 of his votes running on an Independent ballot line, and was hoping to appeal to many conservative Democrats as well as Republicans and independents.

The citywide average turnout of roughly 20% was buoyed by high turnout on Staten Island, which saw nearly 30% of registered voters cast ballots when factoring in absentees. It was home to the only competitive borough-wide race of the general election -- for borough president -- and had one closely-watched City Council race, for the mid-island 50th district. Both races were won by the Republican nominees.

Manhattan, Queens, and Brooklyn each had turnout of between 19% and 21%, while the Bronx saw just 14% of eligible voters cast ballots, in line with its usual lower turnout than the other boroughs.

The former two districts, progressive bastions with high turnout in virtually all elections, did not have competitive general elections. The latter two, Republican strongholds home to many public employees reportedly upset by the city’s covid vaccine mandate, saw the hard-fought mid-island race and a runaway for GOP incumbent Council Member Joseph Borelli.

Sliwa has gotten 41,000 more votes than Adams on Staten Island.

Compared with 2013, Adams fared better than de Blasio did on the Upper East Side of Manhattan, but worse in southern Brooklyn and parts of northern and central Queens, according to an analysis from the CUNY Mapping Service. Some of the areas where Adams did worse saw Republican gains in the City Council and strong opposition to several of the state constitutional amendments proposed on the ballot. They include areas with large populations of Asian, Orthodox Jewish, and white voters of eastern European descent living in enclaves that tend to be more conservative.

Ballot Proposals, Statewide and in New York City
New Yorkers statewide were given a chance to approve or vote down five proposed amendments to the state constitution through yes or no questions on the general election ballot. Of the five, two passed (related to environmental rights and the New York City Civil Court) and three failed (related to voting rights and legislative redistricting).

The passing amendments enshrined "a right to clean air and water, and a healthful environment" and expanded the jurisdiction of the city's Civil Court to claims of up to $50,000 (from $25,000). The failing amendments would have allowed for "no-excuse" absentee voting and "same-day" election day registration and voting, and would have made a number of changes to the way state and federal district lines are drawn and approved every ten years.

Each measure was passed twice in successive sessions of the Democrat-controlled State Legislature before appearing on the ballot this year. All were opposed by Republicans who waged a statewide campaign to kill them, with a special focus on the three that were defeated.

The failure of the three proposals was driven by ballots outside New York City. Within the five boroughs, all were supported by a majority of voters.

Statewide, roughly 3.1 million New Yorkers voted "Yes" or "No" or left the questions unanswered on their ballots (not including absentee ballots), according to the State Board of Elections. That represents roughly 23% of the state's 13.4 million registered voters.

The right to clean air and water is passing 61% to 27%, with 12% of ballots left blank, in the unofficial tally that does not include absentee votes. The Civil Court amendment is passing nearly 54% to 42%, with 15% not answering the question, as of the latest numbers through Election Day.

The redistricting amendment is failing 49% to 38%, with 13% of voters choosing not to answer, with more voters to be counted soon. It is unlikely that the absentee votes, though they will heavily skew Democratic and toward “Yes” votes on the ballot measures, can sway any of the outcomes.

The unofficial preliminary results do include more than 100,000 absentee ballots.

In New York City, the clean environment amendment has thus far been approved by a stunning 82% voting "Yes" and only 18% voting "No," according to the City Board's unofficial tally (not including 75,000 absentee ballots). The Civil Court amendment has 78% supporting it and 22% opposing. Same-day voter registration is up 59% of New York City voters compared to the 41% opposing it. No-excuse absentee voting, similarly, saw support from 60% of city voters and opposition from 40% thus far. The redistricting amendment was supported by 61% of city voters and opposed by 39% of those counted.

But, many tens of thousands of New York City voters did not vote yes or no on the ballot proposals, leaving them blank. For example, in the Bronx, 26.4% of voters left blank the redistricting question, Question 1. In Brooklyn, over 29% of voters, almost 94,000, left Question 1 blank.